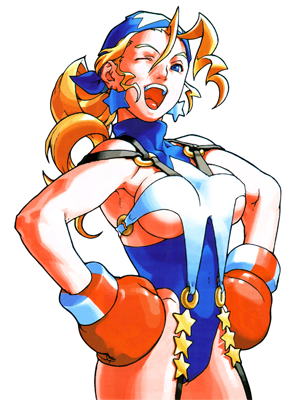 Street Fighter II has a lot to answer for. Sure, it founded an entire subculture of videogames and offered a nicely complex tournament fighter that holds up even today. But it also relied on the most basic of international prejudices, from its South American beast-man to its stoic Japanese warrior, ensuring that each and every fighting game to follow would paint its cast with similarly broad strokes.

Not that we?re really offended or anything. Fighting games are all about visual impact and overbearing style, and their lack of any coherent story (no, Soul Calibur doesn?t count) makes it easy to laugh at the misguided caricatures they present. So let?s just point out the most ridiculously stereotyped characters in fighting-game history. 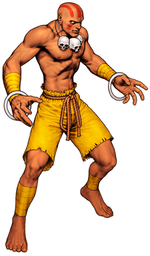 Of all the Street Fighter II icons, Dhalsim is easily the most outlandish. Yes, there?s a possibly gay Russian covered in scars earned from wrestling bears, but Dhalsim?s an even bigger joke at the expense of Indian culture. An emaciated monk who practices yoga has some foundation in reality, but Dhalsim wears monkey skulls, stretches his limbs, teleports, and breathes fire. The last of these, we?re told, comes about just because he eats a lot of curry. It?s not as though Capcom?s artists devised all of this on their own, either. Dhalsim?s artistic ancestor was a limb-stretching yoga mystic in the 1975 martial-arts film Master of the Flying Guillotine.

But none of this can ever approach Capcom?s original draft for Dhalsim, which died on the drawing boards long, long ago: 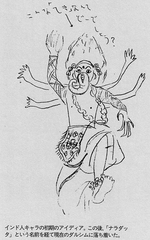 We can only dream of a world where Chun-Li could fight a six-armed Elephant Man. Alas. 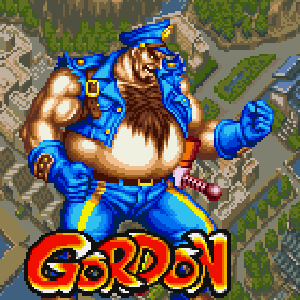 The portrayal of police officers as undereducated, beer-bellied highway fascists is rarely encountered in Japanese culture, where police are more frequently seen as dour investigators who ruin reputations, beat confessions out of suspects and hold prisoners without trial just long enough to piss off Amnesty International.

Yet the Neo Geo fighter Savage Reign and its sequel, Kizuna Encounter, are willing to acknowledge another nation?s unflattering archetypes with Gordown Bowman, a cop entering a tournament to raise money for his sick daughter. Any commentary on the plight of underpaid police is undone by Gordon?s massive gut, which has apparently burst out of his uniform and makes him look less like a down-on-his-luck officer of the law and more like the bouncer at an invite-only biker bar.

8) B. Orchid from Killer Instinct

It wouldn?t surprise us if Rare?s Killer Instinct were revealed as an elaborate prank on the fighting-game industry and the people who supported it. The game?s cast is a regurgitated wad of stock characters torn from anything popular in the mid-?90s: a Jurassic Park velociraptor, a Predator-ish robot, a featureless fire character, an equally featureless ice character, a ninja, a werewolf, an African-American boxer, and, of course, a comically over-sexualized woman.

B. Orchid?s lime-green bodysuit and shelf-like chest are perhaps inadvertent results of Rare?s character design and the finest rendering 1994 had to offer, but they clearly intended everything else; her second game finds her without much in the way of pants, and her victory footage in both games includes a player?s-eye pan up her twirling body, accompanied by orgiastic moans. In family-friendly arcades, mind you. And then there?s her finishing move from the original game:

It?s hard to pin down the fighting-game world?s most blatantly objectified female character, but B. Orchid may well be it. Unless, of course, it was all a joke.

Nightwolf?s design and backstory are standard-issue for Native American characters in fighting games: he?s a noble shaman and warrior fighting to protect his people from the forces of evil and so forth, and his look is actually less stereotypical than, say, Chief Thunder?s from Killer Instinct. Yet it?s not Nightwolf himself that stands out as silly; it?s the fact that he was in a Mortal Kombat game.

The first two Mortal Kombats were schlockfests, but they were at least somewhat consistent in that schlock, capturing the hokey atmosphere of Enter the Dragon and other martial-arts films replete with low-budget Eastern Mysticism. All of it came crashing down in Mortal Kombat 3, where the designers were free to throw any horrible, out-of-place idea into the game. Ninja robots! Star Wars Sandpeople! And, of course, a token Native American, because every fighting game needs one of those. Why didn?t they just throw in a riot cop, too? 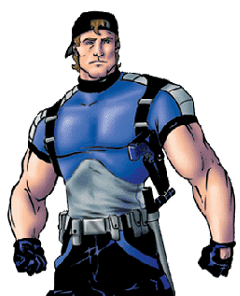 Oh yeah. They did. God, Mortal Kombat 3 was awful. 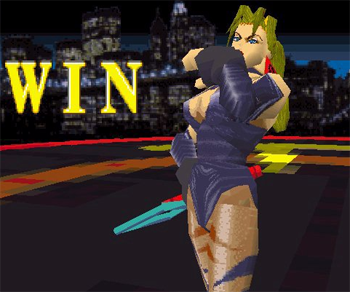 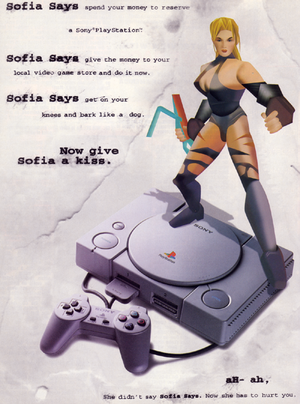 Unfortunately for the mail-order Russian bride market, no one thought about Toshinden after January of 1996, but Sofia had her moment. She was, for a short time, the unofficial Sony PlayStation mascot. After all, only a mascot would get ads like the one above. 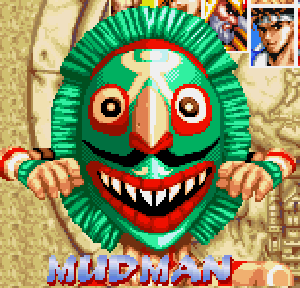 ADK?s World Heroes line is a buffet of ill-conceived characters, all based on historic figures and celebrities: a fat Viking, an inexplicably homoerotic Rasputin, an industrious German cyborg, a punk Jack the Ripper, and a husband-craving Joan of Arc only scratch the surface. And somewhere deep in this swamp of misbegotten ideas is a Pacific Island shaman with the name, possibly given by some white supremacist, of Mudman. 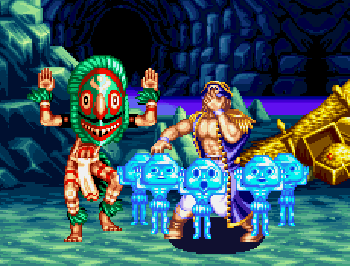 And it?s mostly that name that makes Mudman a bizarre standout among the World Heroes cast, though he also wields his giant tribal mask as a weapon, summons blue spirit-clones of himself, and prances around while whooping excitedly, clearly showing that ADK?s $3 cultural research budget was well spent. 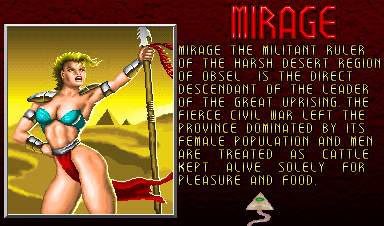 Strata?s 1994 fighter BloodStorm was hell-bent on beating Mortal Kombat at its own game; Mortal Kombat had comically gruesome Fatalities, so BloodStorm let its characters eviscerate each other, impale enemies on stalagmites, and even spout profanities after winning. For the perfect example of its tries-too-hard mentality, check out Mirage. BloodStorm‘s post-apocalyptic world is a barbaric place, and Mirage?s section of it has been overrun by women warriors who enslave all their men their by cutting off their feet at birth and raising them in pens, using them ?solely for pleasure and food,? as Mirage?s intro screen tells us. 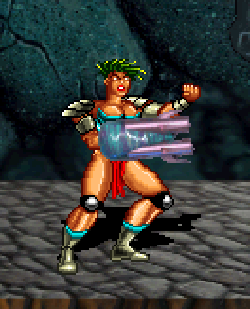 Seemingly taken from a sci-fi novel written by bloated, paranoid right-wing talk show hosts, Mirage is a polished image of the evil buzzcut-sporting feminist Amazon who wants to join all-male country clubs, let girls on high-school wrestling teams, uphold Roe vs. Wade, and, of course, imprison and devour all men. And though it?s never said that Mirage doesn?t like men in that particular way (her game-ending screen shows her lounging before two enchained male opponents), she lives in the ?Obsel? Desert and wields a gauntlet called the ?Aniglav.? Subtle, BloodStorm. Real subtle.

3) Mr. Jones from Rage of the Dragons 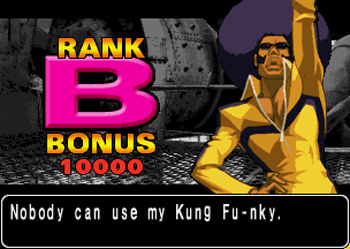 When Rage of the Dragons halfheartedly attempted to re-imagine the arcade classic Double Dragon as a Neo Geo fighting game in 2002, it ran into several problems. For one, a pair of fighting games had already tried to revive the Double Dragon name in the ?90s and failed soundly. It also didn?t help that Rage of the Dragons had a thoroughly unimaginative lineup, with the original game?s Billy and Jimmy Lee inducted into a lineup of fighters who were either SNK rip-offs, underdressed and underage anime girls, or borderline-offensive creations like Mr. Jones.

From his afro to a list of moves called ?Groove Master? and ?Funky Impact,? Jones is a shameless collage of tributes to Blaxploitation films, ?70s hairstyles, Bruce Lee films, and, to a lesser extent, the sort of caricatures you?d see in old cartoons like Coal Black and De Sebben Dwarfs.

While the other two Americans in the game are rude, male and wear prep-school suits, Tiffany is only aggressive in a scatterbrained way and resembles some mix of a cheerleader, a stripper, and a court jester (and Miss America from Ralph Bakshi?s horrible movie Coonskin). Oh, and she wears boxing gloves, she tackle-kisses other fighters during team-up attacks, and she?s possibly named after ex-porn star Traci Lords. Tiffany has yet to be seen wearing a football helmet and firing a Colt revolver into the air while eating a ten-pound cheeseburger at the wheel of an SUV, but Capcom could always make Rival Schools 3.

The digitized fighters of the Mortal Kombat era weren?t much for preposterous character design. Sure, there?s the intensely stereotyped Way of the Warrior lineup and the sheer horror of Tattoo Assassins, but it was difficult to pull off elaborate stupidity when a game?s characters were all motion-captured actors given once-overs in MS Paint. With Kasumi Ninja, however, Atari managed to pull off both an amazingly bad Mortal Kombat retread for the clearly doomed Jaguar and a remarkable representative of all things Scottish. 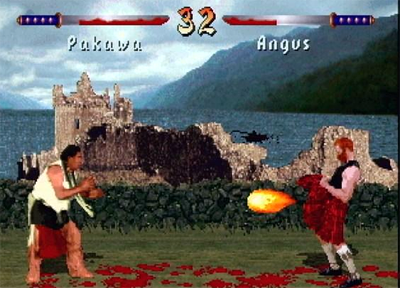 Angus MacGreggor?s backstory is uncreative at best: he?s a highland blacksmith from Loch Katrine, and he likes going around to pubs and starting fights so much that he?s soon left with no opponents. Enraged (as those feisty Scots are wont to be), Angus sets out in search of a truly challenging opponent, putting him against characters with names like ?Thundra, the Amazon Queen.? Yet there?s one memorable thing about Angus: his obligatory fireball attack, which he unleashes by hiking up his kilt and letting his Scottish pride fly forth. It?s the highlight of Kasumi Ninja and, indeed, the Atari Jaguar?s entire library.