Not every Pok?mon is worth catching. In a world of nearly
500 fantastic creatures, there are bound to be at least a few duds. Trainers
don’t have to look very hard to discern between awesome allies and total turds,
for annoyingly tall patches of grass reveal essential truths that separate the
Pidgeys from the Pikachus. Evolution, after all, is the law of the land across
the Pok?verse. When only the strong can survive to be taught the power that’s
inside, sadly, the following Pok?mon are fainters.

Unlike a lot of the pocket monsters on this list, the Pok?ball lookalike Voltorb can actually be trained into becoming a fairly useful fighter. With a little love, its range of electric moves can be cultivated to rival that of a Raichu. Unfortunately for Voltorb, few of its kind ever get that far thanks to what can only be described as an evolutionary hate crime. Voltorb’s trademark move is “Self Destruct.” In our world, the move would last 15 entertaining years and involve loose women, seedy bars and cheap moonshine, but alas, in its attempt to best unbeatable foes Voltorb simply goes out with a quick bang.
9) Tauros

Despite the bull motif of its name, Tauros is essentially the Pok?mon equivalent of the North American buffalo. When trainers first encounter the thrice-tailed beast, it’s been relocated to a park for endangered species called the Safari Zone. The reason for this is because the pioneers of Kanto thought Tauros was delicious and liked to wear its fur. Although the Pok?dex states that Tauros have a violent nature, the species’ stampedes are probably more out of the frustration of genetic inferiority than anything else. Just think, hundreds of years ago, there were likely Tauros roaming free across vast prairies. Now, they’re hunted for sport in captivity. Poor Tauros.

Pok?mon are creatures largely dependent on their cuteness for survival. Like all domesticated animals, becoming a pet is a sure way to prosper. That’s why the less than cute Kakuna takes the heat for wasting everyone’s time learning how to harden while its cocooning cohort Metapod basks in popularity. When Kakuna takes the evolution plunge, it looks like a member of Marvel Comics’ AIM terrorist organization and eventually turns into a wasp. Metaphod, however, takes the form of a cuddly, unripened banana and hatches out a butterfly. Since fickle picnickers determine which bugs live or die, Kakuna should rethink its appearance. 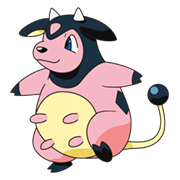 Pok?mon’s straight up animal analogues have it rough. Just like Tauros, Milktank looks a whole lot like food. Even though Milktank is actually a fairly useful Pok?mon, its finer attributes are overshadowed by its capacity for feeding people. With its special “Milk Drink” move, it’s pretty safe to assume that the folks at Silph Co. have found a way to monetize Milktank’s PP for the nourishment of the Johto and Kanto prefectures. How else were Team Rocket’s Jesse and James supposed to feed Meowth? [Ed’s note — don’t ever Google image search “Milktank.” You have been warned.] Combee is one pitiful bastard. As doomed worker drones in their hive society, the smiling, three-faced oafs exists purely to collect honey and build hives from their own bodies. With only two of the weakest Pok?mon moves at its disposal (including the perfumatory “Sweet Scent”) the male Combee must content itself with its miserable fate as only the female of the species evolve into the useful Vespiquen. Perhaps the most depressing aspect of the Combee’s existence is that they don’t even seem to make their own honey, rather they collect it from trainers. If there’s such a thing as evolutionary justice, when the Combee starts to go missing, trainer’s will know it isn’t global warming that’s killing them, it’s the collective disgust of players everywhere.

Here’s Ditto in a nutshell. It’s a purple (or pink) little dude who transforms into imperfect copies of its foes in an attempt to “fight fire with fire.” Given that the rock-paper-scissors mechanics of Pok?mon battles (water types beat fire types, fire types beat grass types, etc.), Ditto’s imitation skills don’t give it much of a strategic advantage, especially when it’s defenses don’t increase to match those of its opponents. That makes Ditto and its transforming powers a novelty at best, and novelties are only valuable in gift shops. Is Ditto in a gift shop? No, it’s in the jungle baby, and if it doesn’t develop some chutzpah quick, it’s gonna die.

Smeargle marks its territory by painting sketches with its tail. That’s cute, but where does all that funky green paint it uses come from? The answer to that question is also the answer to why Smeargle made this list. Gross.

If it weren’t bad enough that Pok?mon players are expected to track down 490 different critters, the mystical Unown comes shaped in every letter of the English alphabet, plus punctuation characters. Famous for its psychic “Hidden Power” move, Unown is perhaps more famous for causing spell-check systems to explode on contact. That’s no good for a world dependent on computers to capture, trade and store Pok?mon. Professor Oak has to catalog the things somehow. By this point in the list, many readers are probably wondering, “Where’s Magikarp? All he can do is splash around. Surely it made the list!” While those are all good points, ultimately Magikarp escapes condemnation for its hugely rewarding evolution into an angry dragon. That’s what evolution is all about, right? Plus, there’s a ton of Magikarp, meaning they breed successfully. That’s where Luvdisc comes in. Luvdisc is what Magikarp would be if, instead of growing up to be a badass, it devolved into a shy Japanese schoolgirl with a body shaped like a bad Valentine’s Day card. Nobody wants that in their cache of battling monsters. Nobody.

In the Pok?mon anime, Mr. Mime moves in with protagonist Ash’s mother after he leaves for his Pok?mon training. He’s basically the equivalent of the annoying dog empty nester parents acquire when their kids go away to college. Given his seemingly meth-fuled addiction to cleaning, he’s better than the average void-filling pet that shits everywhere, barks constantly and chews up antiques, but only barely. Why? Because he’s a mime and mimes are the scum of civilized society.
Part clown, part Jigsaw Killer from the Saw films, part Pok?mon; Mr. Mime is a recipe for gross contempt and assured Darwinian extinction.
Tweet Pin It