RAPTURE REJECTS! Today’s BACKLOG.TXT zeroes in on an early-access entry into the recent (and explosive) Battle Royale phenomenon. Prefer to watch? Click the episode link above, or visit the 2 Headed Hero channel on YouTube!

Rapture Rejects is a humorous 2D isometric take on the growing genre that takes place after the Rapture – and your character didn’t quite make the cut. This brainchild from the creators of the popular webcomic, Cyanide and Happiness, has players attempting to earn their halos by traversing post-apocalyptic suburbia while burying their fellow heathens in mountains of garbage and silverware.

Developed by Explosm and Galvanic Games and published by tinyBuild, Rapture Rejects launched into Early Access on November 29, 2018.

Rapture Rejects does a great job of bringing the visuals of the comic to life. Detailed and fluid animations abound, and the game does a very good job at telegraphing hazards and highlighting loot. Vibrant and colorful environments blend well with the characters, giving Rapture Rejects a cohesive vector-art style.

The gamespace can be rotated in 90-degree increments – a must when trying to sniff out hidden loot or opponents. Using the perspective to your advantage by humping the walls and crawling through cover can give clever players a stealthy edge. While performance was generally smooth, I did notice the occasional stutter or slowdown when rotating the view or utilizing the recon towers. 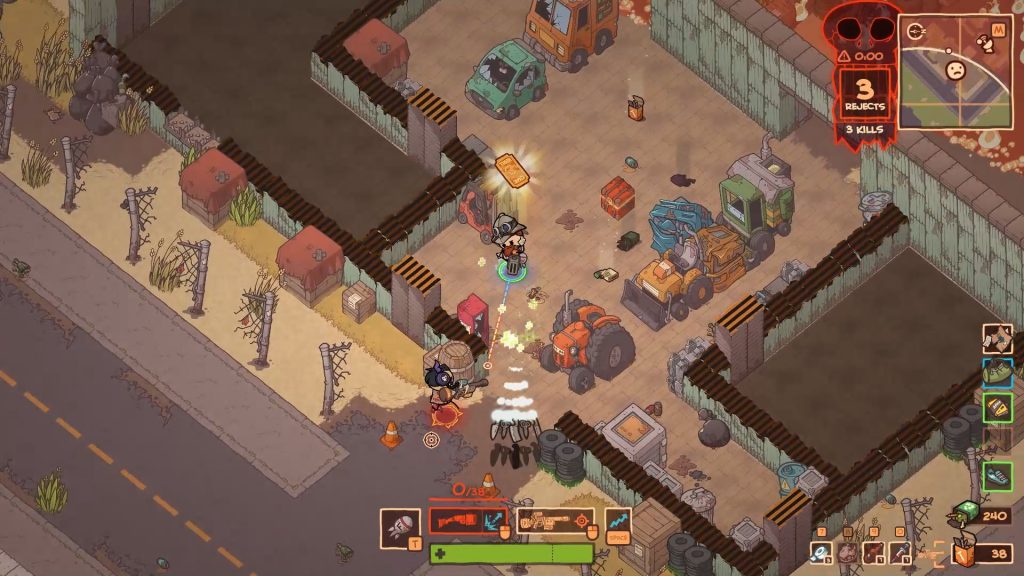 Rapture Reject’s system requirements seemed a bit high for a 2D game, so this can likely be attributed to a need for further optimization.

Characters have a healthy amount of customization possibilities – hair, outfits, skin tones and more can adorn your adorable stick-avatar.

This is probably the only Battle Royale out there that includes buttons for “Boobs” and “Dong” as cosmetic options.

Rapture Rejects takes a familiar approach to player cosmetics – a ticket system allows the purchase of new outfits and accessories. Unfortunately, this feels a bit lost in translation, as the player character takes up a relatively small amount of screen real estate. Currency purchases from the in-game store also seem pretty exorbitant compared to the asking price of the game. The premium currency takes the form of golden tickets, and can be earned by winning matches.

Rapture Rejects also includes a tongue-in-cheek nod at the lootbox mechanics found in its contemporaries. This is formatted as the “Sinners and Winners” gameshow, where you can spend your silver tickets (the game’s equivalent of participation trophies) for a random prize.

Never forget: GOD IS WATCHING YOU.

Taking the place of a match announcer, God’s voice resonates through Rapture Rejects, and it seems like this incarnation of The Man Upstairs is fond of self-referential humor. Soundtrack-wise, the main themes and in-game songs are appropriately over-the-top. Choirs, booming horns, and wailing guitar leads provide a hilarious contrast to the cartoony visuals.

Comical sound effects, like the toot of the brass-based blunderbuss or the censor bleep of an F-Bomb detonation, make expected appearances. Rapture Rejects also features some effective directional sound design. This can give the alert player an early edge over the positions and actions of your adversaries. Keeping an ear open for the telltale sounds of reloading or bandaging can provide the precious seconds needed to rush in and finish the job. 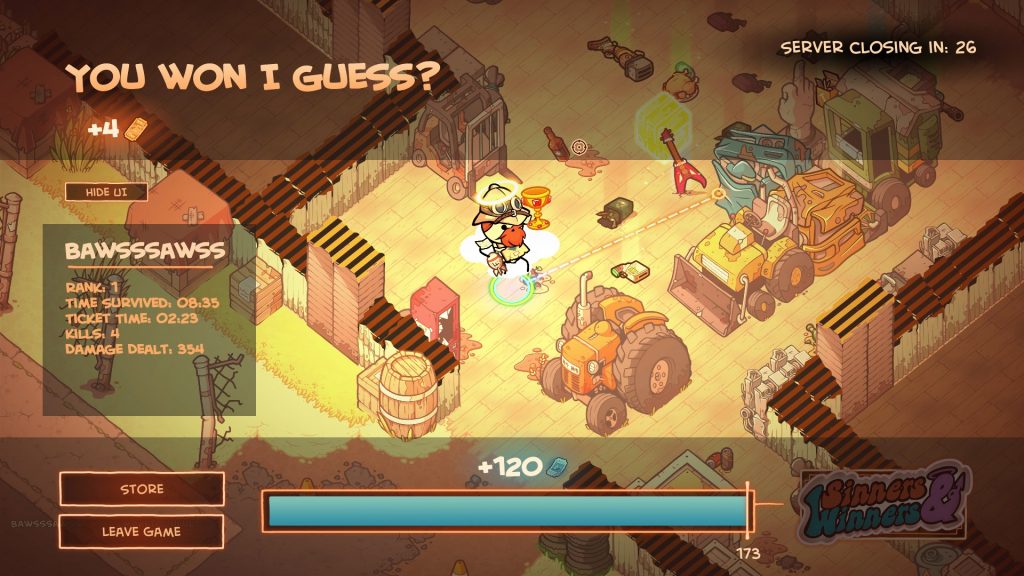 In Rapture Rejects, that is often the difference between a win… 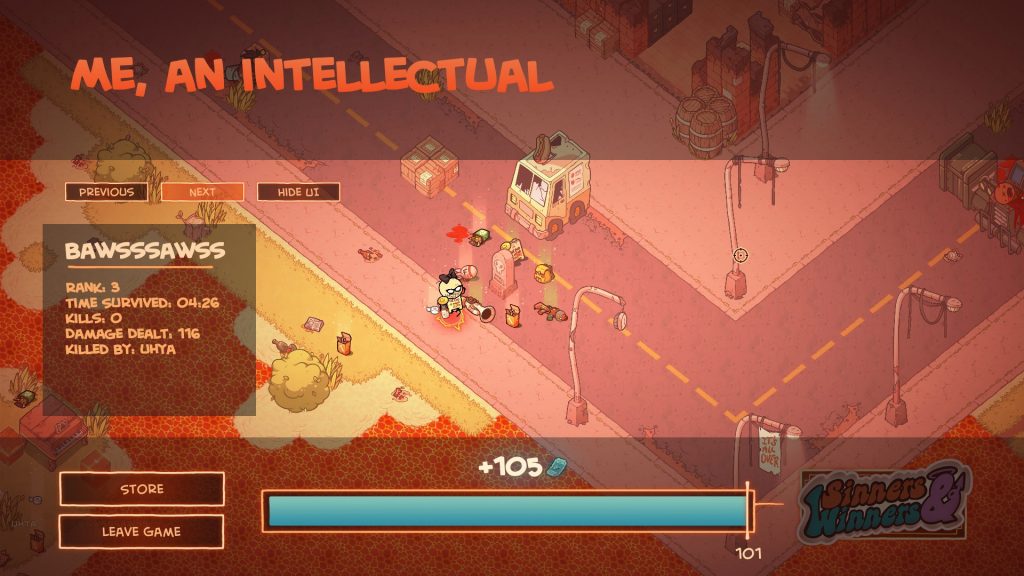 Battle Royales all have a similar concept: drop a pile of players (or teams) into a large map and forage an ever-shrinking zone for weapons and supplies until only a solitary one is left standing. Rapture Rejects cribs much from this familiar idea while translating it to an isometric 2D perspective, but largely succeeds in adding its own particular flair.

Rather than shrinking the zone from the start, competitors must search for a single golden ticket, which is hidden in a crate on the map. Players can die and respawn before the ticket is discovered. Once someone has that prize in their greasy little fingers, though, all bets are off. Respawns disable and the fires of Armageddon slowly close in.

Holding the ticket paints a big red target on your backside. Everyone else in the match will come gunning for you, so preparation is key. 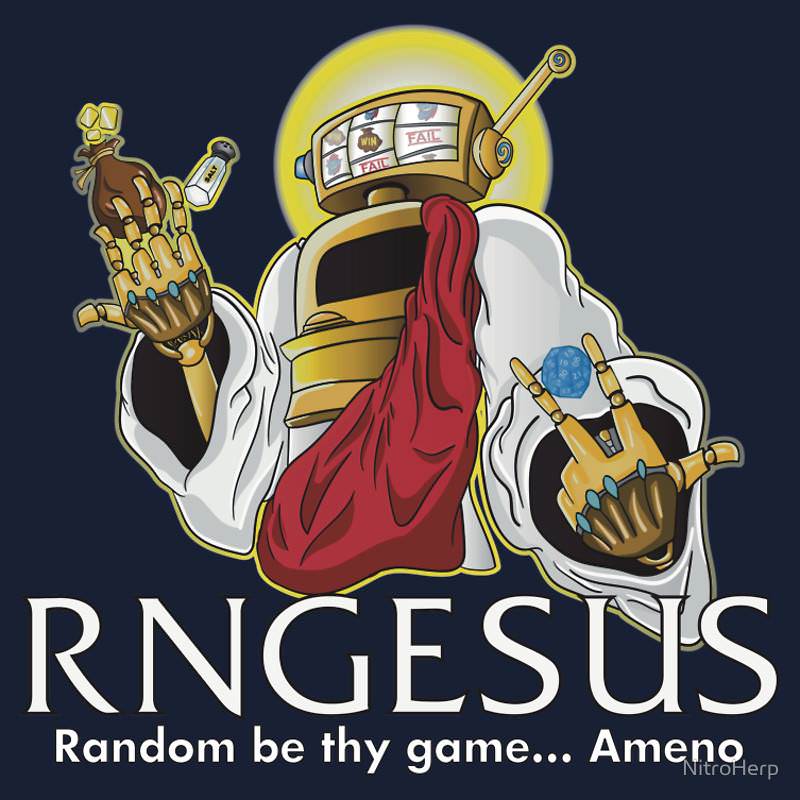 Unfortunately in addition to ticket and equipment drops, spawn locations are also left up to the whims of RNGsus.

There’s no parachuting or airdropping into the map. This removes what many consider to be an important strategic element for a Battle Royale, and leaves even more of the gameplay up to chance.

Rapture Rejects has an arsenal of post-apocalyptic oddities instead of the guns and grenades we’ve come to expect from Battle Royales. For example, the role of the plain old pistol is replaced with a CD-launcher. The reverse pencil sharpener sends a spread of deadly graphite – effectively serving as an analog for the SMG.

This seems like merely a cosmetic difference on the surface. However, many of the weapons have a secondary fire on a cooldown. This adds some new moves and a further layer of tactical depth –  such as the high jump provided by the aptly named Toaster Full of Knives or the charge shot from the Spork Sniper. Projectile speeds seem slightly slow, which is likely an intentional move to compensate for the isometric perspective. The welcome addition of a dodge roll can also help players get out of a tight spot – or into the action.

Throwdown in the Burbs

Special equipment, such as the F-Bomb, Disguise Kit, or Wall of Metal further expand the strategic possibilities. Rapture Rejects does away with the cumbersome inventory management that is so often seen in the games it emulates. Instead, every consumable pickup has its own slot in the user interface which can be bound to a key or simply clicked on. It’s straightforward, and effective.

Despite a fair amount of madcap items, Rapture Rejects feels a bit… safer than I expected. No fart-joke bazooka? No genie powerup? Since updates for the game keep trickling out faster than clergy accusations, I’ve got no doubt that more is in store. Still, taking some chances by adding wackier devices and weapons of destruction would have really gone a long way in making the gameplay in Rapture Rejects stand out from its competitors.

Rapture Rejects delivers on a decent premise, a well-known license, and a more feature-complete experience than most other titles in early access. All the ingredients for a hit seem to be here. But wait – So if that’s the case, why has the game already begun to pop up in bundles, or at a heavy discount, a mere two months after its early access release?

I’m far from being the first to complain about the alarming and rapidly increasing trend of Early Access releases. Paying for the privilege of beta-testing an unfinished product is a hard to swallow concept. While this was once contained to crowd-funded projects or ambitious indie titles, Early Access has now pervaded the triple-A gamespace. 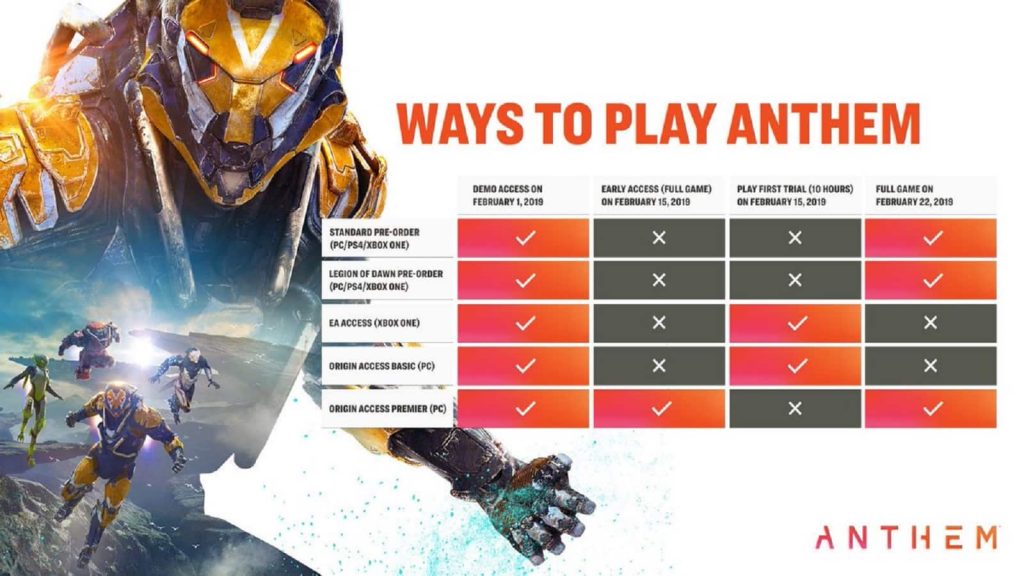 We’re now at the point where publishers have resorted to making spreadsheets to explain their release date schemes.

Player bases often move on from Early Access games long before they are officially released, and this is even more common in the indie gamespace. This issue is doubly compounded for multiplayer titles, which rely on a healthy community to sustain the game. Rapture Rejects is already in trouble here.

Matches Not Made in Heaven

Developers tend to throw their games into bundles or offer free weekends when their multiplayer games are doing poorly. We’ve seen this time and again even with prominent triple A titles, and Rapture Rejects is no exception. Matchmaking takes upward of five minutes, and the most players I’ve faced in a single bout was six – a far cry from the server max of fifty. It’s pretty discouraging – unless you’re into the idea of a lot of one-on-one fights.

Desolate servers mean a worse player experience, which in turn leads to more negative reviews. At the time of this writing, Rapture Rejects appears to be getting review bombed on the Steam store, which only contributes to this downward spiral.

Rapture Rejects picked an unfortunate time to airdrop into the Battle Royale arena. Going up against new heavy hitters like Apex Legends is a dicey move. Those looking for a 2D experience can already find it distilled to near-perfection in the browser-based (and free) surviv.io. The Battle Royale genre is starting to look a lot like a Battle Royale match itself. Promising games are entering the arena in a fight for player populations – and dollars. The losers are left outside the zone to slowly starve out, and die off.

Explosm has tried to drum up further interest with contests and cosmetics, but it’s a far cry from the unstoppable marketing juggernaut of Fortnite. The game’s forums are filled with calls to remove the cost of entry, which might fix some of the aforementioned server population problems, but probably looks like a shaky path to return the investment of development costs. Rapture Rejects’ pricing scheme looks a bit old-fashioned in comparison.

Like a tornado ripping through a circus tent, Rapture Rejects is a fun idea that’s at the mercy of its environment. Still, you’ve got to wonder whose bright idea it was to put up a circus in the middle of Tornado Alley.

As much as it pains me to see a game with this much potential languishing in isolation, it’s hard to recommend it over the many sublime free-to-play alternatives. Still, picking up this game on a discount and jumping in with a group of friends (or onto the game’s Discord) is well worth the time for fans of 2D shooters and Battle Royales.

Much like the mythology it pokes fun at, it’s a real shame to see Rapture Rejects get left behind. I hold out hope that the developers can enrapture some more fans by the time it sees a 1.0 release.