Menu
Home
>
TV
>
Against All Common Sense, the Lost Video Game Looks Kind of All Right

If you had told me a week ago that there was going to be a Lost video game for the Xbox 360, PS3 and PC and that it wouldn’t totally suck, I would have called you a liar, then hit you. Then, while you were down, I would have kicked you in your stomach until you threw up on yourself. Apparently, I’d also owe you an apology, because IGN has a hands-on preview and videos of the game, and I’ll be damned if it doesn’t look pretty good. 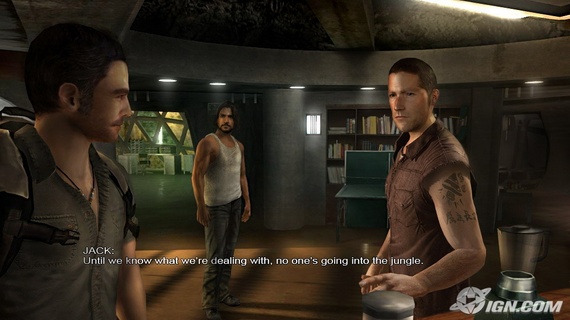 You play Elliott, another suddenly-there-on-the-island-castaway (a la Nikki and Paulo), and go through the events of seasons one and two. You meet all the main Lost-ies (mostly voiced by sound-a-likes), press the button, run from the smoke monster and deal with your own unique combo of a mysterious past and crash-caused amnesia.

The game looks to be a combo exploration/puzzle/survival horror game which somehow replicates the events of the show with this new character, but doesn’t break them, meaning I have no choice but to be cautiously impressed, meaning I’ll inevitably be crushed when the game comes out and sucks anyways. It’s due in late February, so we’ll know then, I guess.