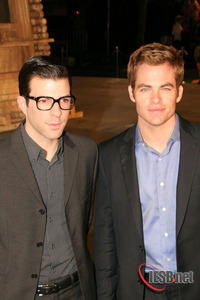 J.J. Abrams’ Cloverfield movie is about open tomorrow, and besides sticking a teaser trailer in front of it, Abrams has used his new movie as a way to shill his upcoming Star Trek movie in every way possible (I’m not surprised or perturbed by this, mind you, but let’s call it what it is). Abrams and most of the Trek‘s movie cast attended the Hollywood Cloverfield premiere last night, where IESB.net talked to them, getting no information of consequence about the film, and took pictures of them, but not in costume, so they just like people who would have been considered too attractive to star in a Trek film if it were being made five years ago. You can check out the interviews here and the pics here.