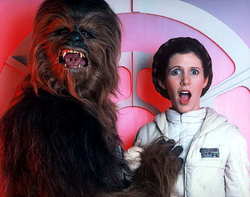 Peter Mathew?the lanky Brit underneath the Chewbacca costume for Star Wars episodes 3-6?is interviewed in the Phoenix New Times, and wants to remind you that 1) Chewbacca was killed off in the Star Wars novels, and 2) he really wouldn’t mind a paying job.

Was Chewie?s death [in the novel Vector Prime]okay with George?
It happened, he had control of it.

I?ve never read the novel, but to me, Chewie never died.
Nobody?s proven to me that he?s dead. After all, it?s only the books, and remember that the books don?t really have any resemblance to the movies. It?s a side trip off the movies, it?s another?s interpretation of George?s story. If it happens in a book, fair enough. If it happens onscreen, I might be a little bit more worried about it.

Any chance you?re gonna be in the new Star Wars TV show that?s in production?
If there is a chance, I don?t know. If Chewie is around, I would imagine that I would be able to do it if I was asked.

Hear that, Lucas? Mayhew needs his booze money. On a side note, Chewbacca’s dead? I stopped reading the SW novels awhile ago because they were so terrible and I wanted to know the love of a woman, so I missed it. Here’s the details, straight from Wikipedia:

The 1999 novel Vector Prime by R.A. Salvatore (the first in the New Jedi Order series) marks Chewbacca’s final appearance in the Star Wars universe. Chewbacca sacrifices his own life to save that of Solo’s son Anakin from a collision between the planet Sernpidal and one of its moons. Afterward, the other core Star Wars characters are emotionally crushed by the loss, and Han Solo sinks into alcoholism and depression.

An alcoholic Han Solo? If he throws up and passes out in the Jedi Temple and starts throwing empty gin bottles at Leia, I’d actually forgive the prequels.