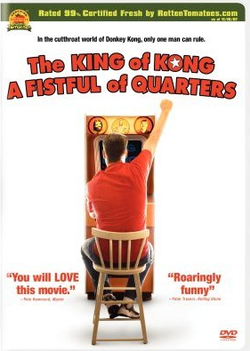 ? Aqua Teen Hunger Force Vol. 5
Anyone catch Sunday’s “Sirens” episode with Neko Case? I had no idea the ex-Phillies outfielder John Kruk would be willing to be so damn weird.

? The King of Kong: A Fistful of Quarters
This nerd-doc follows the current champion of the Donkey Kong arcade game, and one man who tries to de-throne him. It’s been quite well reviewed, so it’s worth checking out.

? GLOW: Greatest TV Moments
GLOW stands for the Gorgeous Ladies of Wrestling, which aired in the 80s late at night. Most of what I learned about sex came from watching GLOW after my parents were asleep. Although the ladies never seem to appreciate the suplex.

? Monty Python’s Life of Brian: The Immaculate Edition
The best Python movie in a new 2-disc DVD release, which I can’t tell if it beats the old Criterion edition or not. It’s also available in Blu-Ray.