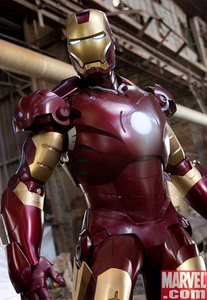 ? Hasbro has a new section of its website devoted exclusively to its upcoming Iron Man toys. Only two figures are visible so far?the thick-in-the-britches Mark I and the leaner Mark III?with five figures left to go. They look pretty awesome, in all honesty. Unfortunately, Hasbro’s got the pics locked in Flash, meaning I can’t get ’em. Enjoy this newly released movie pic instead, as it’s close enough, and check the site out here.

? Pics of Wave 3 of the G.I. Joe classics have surfaced; there’s Wild Bill, Spirit, yet another Snake Eyes, yet another Duke (but with a jet pack), an incredibly awesome Cobra Viper, and a H.I.S.S. Driver. The pics are here.

? NECA released more pics of its original comic Teenage Mutant Ninja Turtles, which mainly include the bases (which are not exciting at all); but The 5th Turtle has a pic of what is clearly a figure variant of the Leonardo in comic accurate black and white (which looks stellar, actually). I can’t bring myself to show you the bases, but the black and white Leo is here.