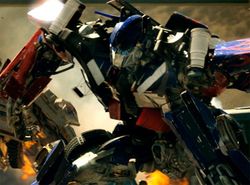 IESB.net says Hasbro and Paramount are planning on making some kind of Transformers amusement park ride sometime in the near future, likely between Transformers 2 and 3. Rest assured this will be of the movie (which was terrible, no matter what you people say), and not the beloved ’80s cartoon. I talked to my source deep inside Paramount, and found out what they’re planning for the ride:

? Appearances by all the Transformers in robot form, authentic in that they all are indistinguishable from each other
? A talking Bumblebee in every car, who speaks only in radio broadcasts snippits, but who never thought to record someone saying a simple “Yes” or “No”
? One wacky black man yelling his mother/grandmother/female family member every 500 yards
? An actual Frenzy robot, who leaps and minces about the ride, mugging for the camera at every opportunity
? The ride stops to stare at Megan Fox’s belly for a full 15 minutes
? A brief discussion of why all the Autobots and Decepticons are vehicles except for Scorponok, who never even transforms into a goddamn robot
? A looped broadcast of Shia LeBeouf saying, “No no no no no” for the ride’s entirety

? A scale model of Bumblebee which pees on all passengers (although the phone got garbled at this point, so it might be “All passengers must pee on John Turturro”)