Menu
Home
>
Video Games
>
You Got Star Wars in my Soul Calibur!

No? Really? Anyways, 1up.com has the news that Darth Vader and Yoda will be in Namco Bandai’s Soul Calibur IV hit fighting game; Vader will be in the PlayStation 3 version of the game, while Yoda is exclusive to the Xbox 360 version. Given that the Soul Calibur series is set in like 1600, and features a samurai, knights and a blind, knife-wielding Italian leather enthusiast, this makes absolutely no goddamn sense, and surely will be terrible and goofy (like when Spawn was in the Xbox Soul Calibur II). Unfortunately, as a Star Wars fan and a Soul Calibur fan, I am filled with glee, and thus will be emotionally crushed when the game comes out and sucks. Pic o’ Yoda fighting a smaller-breasted Greek swordwoman after the jump. 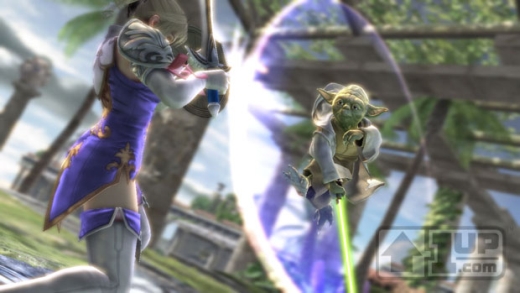