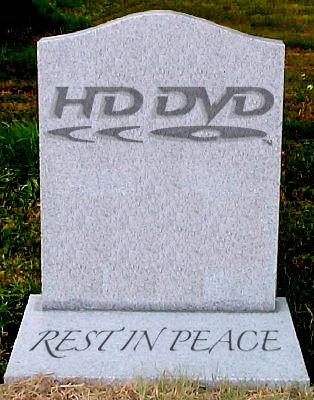 Ding dong, one of the next-gen video formats is dead. A mere month after Warner Bros. announced it was going Blu-ray exclusive, thus giving Sony?s Blu-ray format 70% of all movies, Reuters is reporting that Toshiba will totally halt HD-DVD production next week.

Of course, in this past month, more studios have either gone Blu-Ray exclusive or dropped their HD-DVD exclusivity, consumers have been returned their HD-DVD players bought over the holidays, major stores like Wal-Mart have stopped carrying HD-DVD and basically every movie studio executive and industry analyst has said Blu-ray won the war and that HD-DVD is doomed. And now it?s dead. Dead dead dead.

Goodbye, gentle HD-DVD. You really screwed up the next-generation of video technology, caused regular DVD sales to drop precipitously, and confused a lot of people, and but you will be missed?by the poor bastards who bought HD-DVD players.