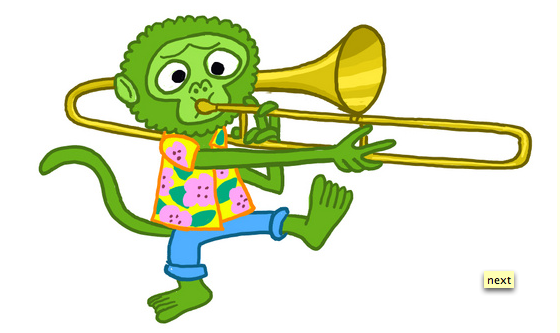 Kotaku has word that the creators of Parappa the Rapper?artist Rodney Greenblatt and game designer Masaya Matsuura?are teaming up to make Major Minor’s Majestic March for the Wii. From the press release:

Major Minor’s Majestic March turns the Wii Remote? into a “special” baton that the bandleader, Major Minor, uses to keep tempo, recruit new band members and pick up valuable items. While marching through eight whimsical locations that contain various hair-raising events, Major Minor strives to create the most impressive parade ever. Players can add up to 15 different instruments to their dynamic procession–including brass, woodwinds, and percussion–to alter its composition and resulting performance. Players are scored on how well their band maintains its rhythm and manages obstacles that could otherwise throw the procession into disarray. The band keeps tempo to more than 25 popular marching band songs from around the world, composed into original medleys for each stage.

And because it’s Rodney Greenblatt, the marching band looks to consist of entire of animals. Which means Monkay. With. A. Trombone. Sold American.