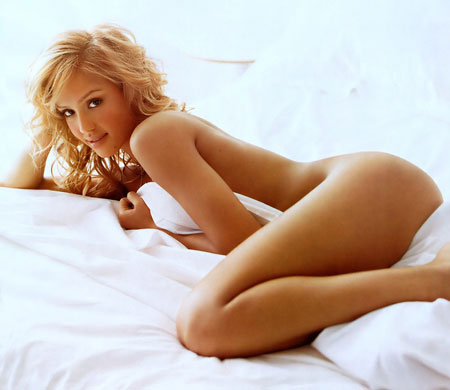 There are hundreds of hot actresses strolling around Hollywood nowadays, but how many of them have the acting chops to back up their looks? Not nearly as many. Topless Robot is not particularly proud to run through a list of ten hottest actresses who can’t act to save their lives, but we’re doing it anyways. Ogle their curves and sultry looks now, because it’ll be a cold day in hell before you see them up at the Oscar podium.

Just squeaking into our list is Sophia Bush, Hot Girl Most Likely to Elicit a ?Who?? from the audience. Since no dudes watch One Tree Hill, some of you may recognize Ms. Bush from god awful films like Stay Alive, the piece of shit ?You die in the game, you die in real life!? movie costarring Frankie Muniz, and The Hitcher, a blink-and-you-missed-it horror remake featuring Boromir as a not-so-nice member of the carpool fellowship. Sophia’s acting is pretty much on par with both films, which isn’t saying much.

We’ve included the trailer to The Hitcher for your viewing pleasure:

Sure, Heather Graham is perky and has big cans, and it’s helped her get typecast. She plays a whore in virtually every movie she’s been in (Boogie Nights, From Hell, Bowfinger), and in the movies where she isn’t a whore, she’s incredibly bad to the point where you wax nostalgic about all of the movies you can see her boobies in.

Case in point: this bullshit movie called Cake, where it appears that Heather is not playing a whore nor shows her Graham crackers. We apologize for subjecting you to this:

We know, lately she’s been veering from ?hot? to ?crack whore-esque,? but still, many would argue that she’s sexy. Her acting, however, is not. She contributed absolutely nothing to Sin City and killed our brain cells in Just Married and Don’t Say a Word. The nail in the coffin? Uptown Girls. How dare you force us to endure ninety minutes of both your bad acting and Dakota Fanning? Brittany Murphy, you are an asshole.

Her main ?I’m more than just that hot girl Jude Law boned, damnit!? attempt was starring in Factory Girl, but that movie was regarded by movie critics as a fart in the wind. Here’s a boring clip of Sienna Miller essentially acting like herself in ’60s gear:

Lindsay Lohan’s chest size is inversely proportionate to her acting range: the bigger her tits got, the shittier an actress she became. Cute, tolerable schlock like The Parent Trap and Freaky Friday dissolved to double-D bras and cringe-inducing cinema like Georgia Rule and I Know Who Killed Me. Rumor has it that she’s desperate to get cast as Alice in Tim Burton’s trippy envisioning of Alice in Wonderland. We’d raise a stink about what a horrible casting choice this would be, but we’re pretty sure that Tim Burton knows better.

Bask in Lindsay’s monotone and ?I work the breakfast shift at a strip club? dancing in this trailer for I Know Who Killed Me:

Yes, you could bounce a quarter off Jessica Biel’s ass. Yes, her body is so tight that you wish a little rain cloud would follow her overhead and permanently give her that hot, soaking wet look. But she was wooden in The Illusionist, embarrassing in I Now Pronounce You Chuck and Larry, and ?seriously, what the fuck? bad in Stealth (costarring Academy Award winner Jamie Foxx, but that’s a whole ‘nother article). Jessica Biel is better off sexily posing on beaches for Maxim and FHM spreads. Until that day comes, enjoy the hottest clip from I Now Pronounce You Chuck and Larry (and try to drown out her attempt to act):

Evangeline has a sexy body in a sporty sort of way. She’s the kind of girl you want to go hiking with so you can stare at her ass as she’s scaling steep terrain. However, the fact that a smoke monster, a polar bear, or Vincent the dog hasn’t mauled her to death on Lost yet is simply maddening. She chews so much scenery as Kate that it’s a wonder that Oahu has any foliage left on the island. Watch her pout and look constipated in this Lost audition tape and wonder who the hell she must have beat out to win this role:

Aside from being hot, Eva Longoria’s main claims to fame are being the hottie that Tony Parker is banging and The Vaguely Ethnic One on Desperate Housewives. She’s kind of transcended from an ?actress? to a mere ?celebrity? because of her lack of discernible acting roles and her penchant for gushing about Tony’s wang in interviews. The most recent bit of acting we were able to (lazily) find was this trailer for some movie called Over Her Dead Body, where she plays a spoiled, shrewish woman who refuses to let her husband meet other girls, eve though she’s dead.

Most recently known as the teenager who looks 28 in the movie Transformers, Megan Fox has fanboys drooling since the blockbuster debuted last summer. The audience is supposed to believe that she’s doing an adequate job of acting like she’s attracted to an ugly schmuck like Shia LeBouf. It didn’t work. Granted, this is a Michael Bay movie so it’s not like we’re expecting The Godfather, but still, if Transformers is an indication of how talented an actress Megan Fox is, then, well, at least she’s gorgeous.

Jessica Alba is the Citizen Kane of hot actresses who can’t act. She’s sexy, she’s beautiful, she’s got a great body, and for some reason she gets steady acting work. Wait, we know the reason. It’s because she’s HOT. Name a movie she was good in. Not just hot, but good (and no, Sin City doesn’t count because of the Brittany Murphy Argument). Honey? Fantastic Four? Into the Blue? Good Luck Chuck? Her most recent release, The Eye? All of these movies are painful to watch, not just because they suck (which they do), but because you know that Jessica Alba is trying so damn hard to act yet is failing miserably.

We bet a million topless robots that Ms. Alba will get so desperate to be ?taken seriously? as a legitimate actress that she’ll ugly up in some Oscar-baity role in an attempt to seem ?so brave? for gaining a whopping 20 lbs. and growing a unibrow. When that happens, just remind yourself that her work in shit like Fantastic Four 2 is really on par with how the rest of her career has looked: