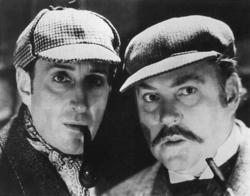 I wanted to shake things up in “FFF,” and get a little literary with it. After all, it’s not fair that modern cartoon characters and cult favorite, sci-fi/fantasy show stars should be able to have all the gay sex. Today’s author Almighty Sempai takes us way back to 19th century England, when the world’s greatest detective, Sherlock Holmes, faced a mystery he couldn’t solve in his

?Tell me, how long have you had this affliction?? I asked, picking up my notebook.

?Well,? Holmes started, sliding down in his chair and crossing his long legs at the ankles, ?that would be hard to pinpoint. However, I can guess that I first noticed it near on six months ago.?

?Interesting,? I said, making a note of the date. Six months was a long time to go on with any sort of affliction, so it mustn?t be too serious, I thought. ?Can you think of anything that may have triggered it??

?Let?s see,? Holmes mused, taking a long drag at his pipe. ?There were no particular cases that caused in me any reactions other than the usual satisfaction of having solved something. No singularly dreadful events, no sicknesses?? He glanced over at me. ?No, the only thing I could think of is our first taking lodgings here on Baker Street.?

?Describe to me what you feel,? I prompted, in an effort to get him thinking.

?It is difficult,? Holmes admitted. ?A sort of restlessness, and vague desire for something.?

?A physical desire, perhaps?? I said with a raised eyebrow. It was certainly not an unreasonable question, considering I knew enough of the man?s habits to infer that he was not personally knowledgeable in a carnal sense.

Can’t you see, Watson? It’s elementary?he wants to get up in dat ass! I have to admit, Almighty Sempai does a rather swell job of replicating the sentence structure and glacial pacing of Victorian literature; I’ll skip ahead to end, otherwise we’ll be here all day.

Suddenly, Holmes seemed terrified, as though the full implications of our conversation were only beginning to truly sink in. ?Love? Watson? What am I doing? I have no idea.?

I laid a finger gently upon his lips. ?Shush, Holmes. Think of it as a case. Each clue unfolds a part of the mystery. If you knew it all at once from the beginning, it wouldn?t be any fun to solve.?

?Right you are, my dear Watson,? Holmes grinned. ?Right you are.? And then, with all the boldness he displayed when cracking one of his beloved mysteries, he pressed our lips together. It was clumsy and rushed, and amateur on both our parts, and yet it was the sweetest kiss I have ever had. I savoured the taste of him, sweet tobacco and mint, and more than that, I relished the feeling of that hole of yearning inside me being filled. Filled with him, my Sherlock Holmes.

Mystery solved! But feel free to read the entire thing here. I’m off to get some mint and tobacco ice cream.