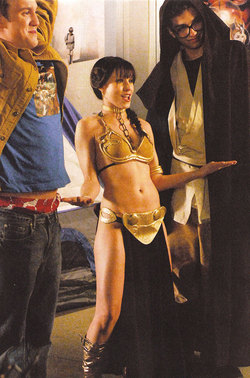 (Alliteration!) If you’ve heard of the film Fanboys, about a group of Star Wars fans trying to break into Skywalker Ranch in 1998 to see Episode I before their friend dies of cancer, you’ve probably had one or two thoughts about: 1) “Wasn’t that supposed to come out like two years ago?” and 2) “When the hell can I see Kristen Bell in the Leia bikini?”

Both valid questions. The answers are “Yes” and “Who knows?” because Harvey Weinstein has demanded re-cuts of the film, removing the cancer subplot and adding wackiness (thanks to hired auteur Steven Brill, of the recent non-smash Drillbit Taylor). And Star Wars fans, who have seen parts of the film at cons for years, and have been very protective of it, have freaked the fuck out, organizing boycotts of all Weinstein films, making rather clever (if over-long) fan videos ridiculing Weinstein, and more.

The Hollywood Reporter now says that Weinstein has “listened,” and will release both Fanboys films on DVD, and is now decided which theatrical release to put out (if any). And yet the Star Wars fans remain unimpressed:

“This is clearly a vain attempt by the Weinstein Co. to avert ‘Star Wars’ fans’ impending boycott of all of their films,” the [501st Stormtrooper Legion] said. “It’s not going to work, Darth Weinstein. There was never any doubt that you would release both versions of the movie on DVD, probably months apart, so as to leech as much money from ‘Star Wars’ fans as possible. Our boycott will continue until the Weinstein Co. announces that they are returning control of ‘Fanboys’ to the ‘Star Wars’ fans who made it, releasing the original version in theaters and doing away with their anti-fan version of the film altogether.”

Bully for the nerds, although boycotting Superhero Movie probably wasn’t that tough a feat. It’s not like Weinstein didn’t know about the cancer subplot when he bought the damn film. Anyways, I’ll be shocked if the film ever hits theaters at this point; more than likely Weinstein will release his version on DVD, it’ll tank, he’ll wait forever to release the original version, which will sell decently despite no marketing, and everyone will remain pissed. Win-win!