Menu
Home
>
TV
>
NBC Hates You and Is Incredibly Stupid 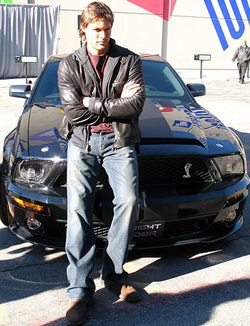 Case 1: Despite the Knight Rider TV movie being incompetent beyond measure in all facets (acting, writing, effects, writing, writing, writing), NBC has gone ahead and ordered an unknown number of TV episodes, starring the same less charismatic, faux-Dane Cook who shrugged his way through the TV movie. I think this is an act of aggression by NBC to its viewers, and frankly, would be willing to talk about countermeasures.

Case 2: I saw the above Knight Rider news in an article at the Hollywood Reporter, where I also saw this, which leads me to believe NBC is both mean and dumb. See, NBC has ordered a show titled Kings, starring Ian McShane. Now get this:

The Michael Green-penned “Kings” is loosely based on the story of King David. It stars Christopher Egan as a pure-hearted young warrior who joins the court of the charismatic and authoritative King Silas (McShane).

I’m no vastly overpaid TV exec, but I’m pretty goddamned sure America is not and has not been looking for a TV show about King David. Who approved this? Who the living hell thinks this will be on for more than two weeks? Why not a show on the wacky adventures of Job, as he tries to deal with family life at the birth of civilization, while God afflicts him with ever curse and tragedy known to man to see when he’ll break! Starring Ray Romano as Job! Sigh.