The ?80s were supposed to be a harmless time for toys and the cartoons that sold them. Whether shilling lines of action figures or promoting characters who would eventually be action figures, these shows were designed to eat up kids? attention in 30-minute blocks while ham-handedly promoting good citizenship and hygiene. In spite of this, cartoons sometimes snuck in certain moments that were clearly designed to break impressionable minds and pervert the youth of America. In the interests of helping a generation get through long-stewing cartoon-related stress disorders, we?re confronting the worst things the ?80s ever did to us. 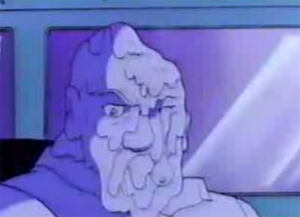 Rule one of traumatizing kids through cartoons: abuse the most beloved character. And G.I. Joe?s most beloved character was Shipwreck, the likable naval wisecracker who was in no way based on Jack Nicholson. So the episode ?There?s No Place Like Springfield? took Shipwreck and stuck him in a bizarre simulacrum of the future, in which he was living in a small town with his wife and a daughter he didn?t remember having.

Of course, the whole thing?s a plot by Cobra, and all of Shipwreck?s down-home friends and family are Synthoid androids. This is slowly revealed as people around Shipwreck start melting right before his eyes (see the eight-minute mark above), and his wife and daughter eventually try to shoot him inside a burning home, before Shipwreck?s pet parrot swoops in and melts them with a magic ray. Paranoia? Fake families? Perfect for the Cold War. 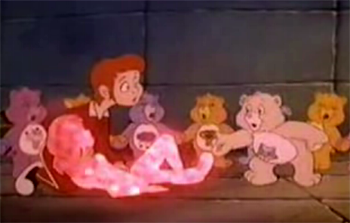 The Care Bears were purportedly intended to promote Christian values, but they generally pushed the same lessons as filthy amoral heathen cartoon characters: believe in yourself, eat your vegetables, don?t litter, don?t cut in line, don?t be an asshole, and don?t sell your soul to demons. Yet there?s one moment where the sky-dwelling bears go into full-blown Jesus mode and raise the dead.

The second Care Bears movie pits the legions of bears and other toy-friendly animals against a malevolent shape-shifting creature named Dark Heart, who demands a picked-on girl?s soul in exchange for making her the best athlete in her summer camp. The girl, later realizing she?d been a moron, joins the Care Bears in confronting Dark Heart at the film?s end, and, in a strangely morbid turn for a cartoon inspired by American Greetings, catches a villain-propelled lightning bolt and, at about the two-minute mark in this clip, dies.

As the human-shaped Dark Heart cradles her lifeless form, the Care Bears devise a solution straight out of old Peter Pan plays: yelling that they care and asking all of the movie?s audience to join in. Of course, it works, thus teaching children that one can resurrect the deceased by sheer force of will. One can only imagine all the soon-to-be-disappointed kids left screaming at dead family pets or grandmothers? caskets. 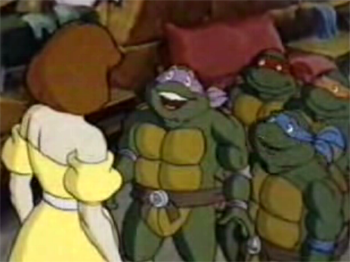 Over the course of Teenage Mutant Ninja Turtles, each of the turtles got his own love interest, and none of them, mercifully, ever included their most prominent human ally, April O?Neil. As we all saw it, they were all just friends. Our perspective didn?t change until later, thanks to the Internet and a lot of things we?d just as soon not discuss.

Yet there?s at least one scene that gives us viewers pause: in the episode ?April Fool,? April leaves behind her yellow jumpsuit for once and dons formal wear. For some reason, she treks down into the sewers to show off her gown to Donatello, Raphael, Leonardo and Michelangelo. At the 3:27 mark here, all of them are on the verge of howling like Tex Avery wolves, with even Splinter, the turtles? sanguine rat-man mentor, ogling a woman not of his species. And then the turtles follow April out of the room, clogging the door in one writhing mass of undisguised reptile lust. Horrifying.

7) The Smurfs Sing Someone to Death in The Smurfs 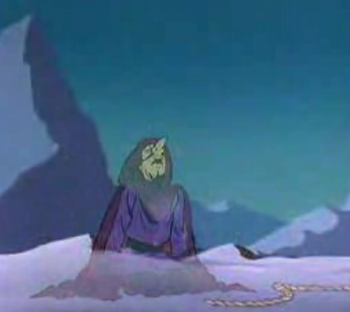 On the list of threatening cartoon characters, the Smurfs land just above the Snorks and just below the Shirt Tales, who could probably still tear a grown man apart if they all attacked at once. But there?s another side to the Smurfs and their seemingly innocuous world of mushroom houses and single-trait characters. And it?s not just the “GNAP” virus.

In their first Christmas special, the Smurfs were called upon to save two lost children and their longtime nemesis Gargamel from a sorcerer who, as the show goes on, is clearly painted as an emissary from Hell. The Smurfs fight back the only way they can: by singing an interminable non-Christmas song with the refrain ?Goodness makes the badness go away.? And the Satan-worshipping sorcerer screams and screams and screams until he disappears. Don?t fuck with Smurfs.

6) Seaspray Loves a Mermaid, Becomes a Mermaid and Hits on Bumblebee in Transformers

Never mind all of the gruesome mechanical death in the Transformers movie or the episode where Perceptor became a robot geisha on a planet of feudal Japanese aliens; the most screwed-up moment in Transformers cartoon history comes when the burbling-voiced Seaspray commits several crimes against nature.
Dispatched to break up a Decepticon mining operation on a distant civilized planet, Seaspray quickly strikes the fancy of Alana, one of the entirely humanoid natives. In a testament to just how little the writers of Transformers cared at this point in the show, it?s revealed that she and her people use a magic pool to change into mermaids.

Though the pool is shown to destroy robots, Seaspray jumps in and becomes an Aquaman look-a-like. Not only is it weird, it also demonstrates that Transformers have souls?which makes the full-scale robot slaughters in the movie all the more disturbing. Also disturbing: the episode?s opening moments, in which Seaspray has an oddly romantic oceanside conversation with a clearly uneasy Bumblebee. 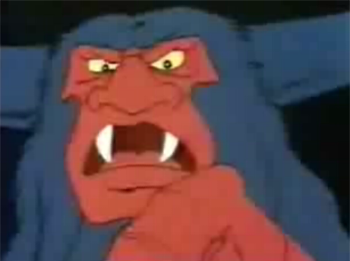 Unlike every other cartoon based on a toy line, My Little Pony had no pre-designated villains, leaving the writers to constantly devise new ones to wreak havoc on the little pastel mini-horses. Some of these antagonists weren?t so threatening; think giant cartoon squids and overweight witches who wanted to flood the Pony Mansion or steal all the Pony Savings Bonds. The first ever Pony villain, however, was a demon overlord.

That?s what we assume, at least. Tirac, the angry horned centaur-thing who debuts at 3:45 in the above clip, certainly looks the part, and sounds it, too, with a raspy voice worthy of Frank Welker?s finest roles. This emissary of Satan sends out dragons and lizard-men to kidnap unsuspecting ponies. Then, in scenes far too creepy for a cartoon ostensibly aimed at 5-year-olds, he chains them up, laughs at their bleats for help, and turns them into monstrous dragons by unleashing the mutating nightmare of his dark magic upon them. Still, his image is shaken later on, when the ponies and their token human ally confront him and the snarling hell-creature is crushed inside?a rainbow. Pansy. 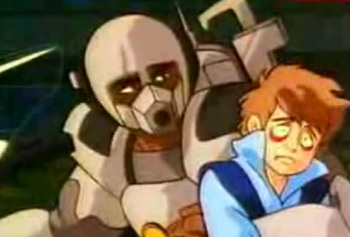 It?s easy to mistake Spiral Zone for another G.I. Joe retread?because, to some extent, it is. The show?s heroes, a pack of conveniently international super-soldiers in hi-tech armor, would?ve fit right into a battle with Cobra. The show?s villains, however, played a little differently. By the show?s beginning, a crazed scientist had already conquered half the world by dropping an insidious bacteria from space, turning people into yellow-eyed zombies with red fungus sprouting from their faces, as we see right from the opening clip.

Between the burned-out city wastelands of infected ?zones? and the hollow-eyed victims shuffling around them, Spiral Zone was the closest thing kids? TV had to The Day After. Sure, the heroes had names like Dirk Courage and the villains, even with their creepy facial lesions, were stupid-looking, but there?s something bleak and unpleasant about Spiral Zone. Was it an allegory for nuclear war? The AIDS crisis? Probably not, but it?s disturbing that the question should arise around a toy commercial. 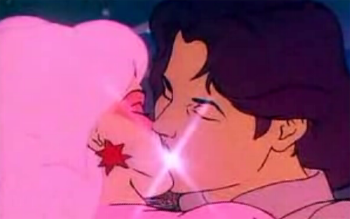 Censors in the ?80s were, we assume, fairly watchful people. They?re the reason every G.I. Joe plane had parachuting pilots, and why the word ?die? was avoided like profanity. If we were to pick a cartoon adept at sneaking things past those censors, we wouldn?t have picked Jem, the extended pop-music war where the most objectionable thing was the way the title character?s soulless, computer-aided songs invariably triumphed the slightly less manufactured faux-punk anthems of her rivals, The Danzig-free Misfits.

Yet it?s one of those vapid little songs that slid innuendo past the network watchdogs. In the number ?Who is he Kissing,? Jem/Jerrica openly wonders if her Ken-doll boytoy, Rio, is ?making love to a fantasy.? Perhaps there were board meetings and studio debates over it, but in a cartoon climate where some stations refused to show interracial dating on Robotech, we find it strange that no PTA group got Jem?s song altered.

2) The Remorseless Eating Machine from The Inhumanoids 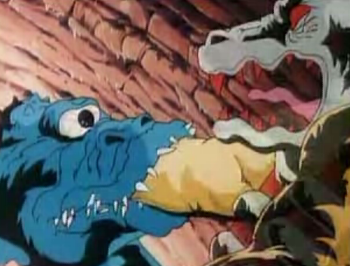 The Inhumanoids is the cartoon every maladjusted eight-year-old boy would?ve made if he?d had his own studio of overworked Japanese and Korean animators in 1987. There are some human scientist heroes in there someplace, but it?s all about the show?s hideous giant creatures who dwell deep inside the earth and do horrible, horrible things. In the show?s opening mini-series, for example, the scientists? lone female member is turned into a drooling skeletal horror at the touch of the undead D. Compose, possibly because she didn?t have an action figure.

Even more unsettling is the Gagoyle, an armless, one-eyed monstrosity with a transparent stomach. After being hatched by the show?s human villains, the creature gruesomely devours all of its unhatched siblings and then waddles around devouring many more things, including the arm of D. Compose and two underworld guardian statues who, despite being stone, writhe and scream as the Gagoyle rips off their heads
((shown at 4:35 in this clip). Then the show?s primary villain, Metlar, endears himself to children everywhere by killing the creature. He was a bit too late, though; the nightmare fuel had already leaked onto the beach of our happy childhoods. 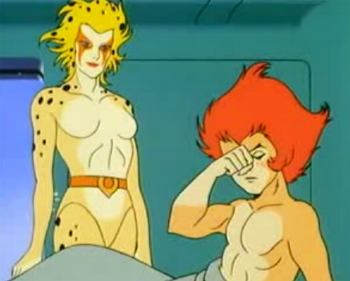 By the time the ?80s hit, cartoons had gotten away with showing Donald Duck pants-less for decades, but Thundercats pushed the envelope a little more with its first episode, in which all of the title characters arrive on their new homeworld stark naked. Yes, even Cheetara. Granted, there were no nipples showing anywhere, and the show might?ve even passed the lack of clothing off as natural; after all, they?re animals, right?

Not really, no. Later in the episode (around the 5:30 mark in the glorious Spanish episode above), every Thundercat save Snarf puts on clothing, making it quite apparent that all of them were, in fact, completely naked just a few scenes ago. And so a generation lost a little shred of innocence. Some parents doubtless banned their children from watching Thundercats five minutes into the first episode, although, when you think about it, they were doing their kids a favor in the long run.