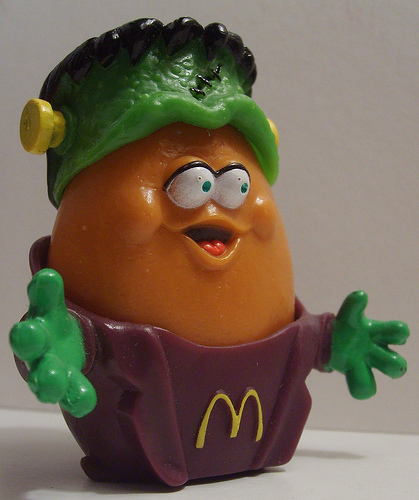 I have a challenge for anyone under the age of 35. I challenge you to look at your childhood toy collection and not find one kids? meal toy. It may be a little figurine, or a bizarre frisbee, or even a weak-ass set of Legos, but if you grew up in the ?70s and ?80s, I am willing to bet cash money that as many as 20% of the toys you owned were received free in a cardboard box with a cheeseburger and a container of milk. But while half of them were pretty fun, and half were kind of boring, there were a select few that were just plain weird. True, not everyone has the same definition of ?weird,? but when you overthink things to the nth degree (like I know I do!) you tend to find weirdness pretty easily. Also, you alienate your friends and loved ones. 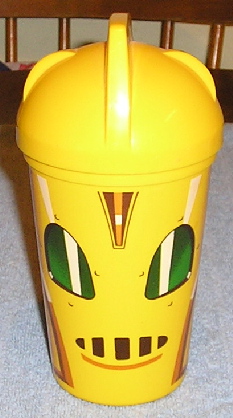 While The Rocketeer is a pretty great movie, and any merchandise based on it is a good thing (there isn?t much outside of Japan, for some bizarre reason), there?s something incredibly awkward about this cup in the shape of his head. Sure, there have been mugs in the shape of characters? heads before, but somehow this stretched-out helmet doesn?t look quite right. Couldn?t they have just put a sculpture of the Rocketeer on top of it, rather than making us pretend that we were drinking out of the elongated skull of TV actor Bill Campbell? 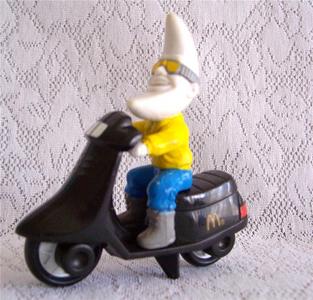 Was anyone else as bothered by Mr. Tonight as I was? On one level, he was just an anthropomorphic moon singing a song about how good McDonald?s tastes after dark. But on the other hand, he was also a pointy-faced, perpetually smiling symbol of night singing a modified version of a song about a serial killer from ?The Threepenny Opera.? Putting him on a moped doesn?t help?he?s still creepy, and I totally understand why the guy inside, Doug Jones, went on to play Pan from Pan?s Labyrinth. Because even under a mask, he can scare the hell out of a grown man simply by trying to sell him a cheeseburger. 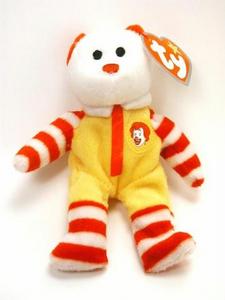 Could Beanie Babies get any more materialistic than they were in their heyday, as the hot collectible stuffed animal of choice? The answer is yes. This albino bear is meant to be a simplified version of none other than Ronald himself, and while this certainly makes him a lot less creepy, it also makes him a lot more subversive. You used to be able to see Ronald coming, but now he sneaks up on you as a motif, or possibly even a theme. He owns the colors red, white and yellow and he has no plans to give them back. He?s a goddamn institution, and all it takes is one poorly thought-out color scheme to insinuate him into your child?s bedroom. Keep your child safe from Ronald. Avoid primary colors. And stripes.

Fast food chains have been making their packaging into mascots for ages, but the Brown Bag Juniors seem like a poor choice of representatives. Why? I don?t know, maybe because they were a bunch of brown paper bags? Nothing against bags in general?they?re very useful things, but the only living beings fascinated by paper bags are cats, and I don?t think they?re ordering the Extra-Long Cheese Coneys. And they?re not exactly symbols of excitement: ?You know why our food is good? Because it comes in a brown paper bag, just like the crappy lunch your mom made you. So why not just eat that?? The idea that kids would want to play with toys of anthropomorphic bags is even more ludicrous?why not just give them a free napkin, tell them its name is Wally, and call it a day? 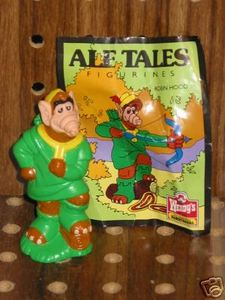 What better way to teach your child about mythology than through the power of ALF? The writers of ALF must have been running low on ideas when they created the spinoff cartoon ALF Tales, which injected ALF and his supporting cast into fairy tales and myths. And Wendy?s must not have had a lot of options when they decided to go with Kids? Meal toys that depicted the Alien Life Form in the costumes of Robin Hood, King Arthur, Aladdin and Little Red Riding Hood. (Seriously? Little Red Riding Hood?) The moral of this story? There?s no fairy tale that can?t be improved?or meal that can?t be made more delectable?by the addition of an overgrown, cat-eating, transvestite space rodent. 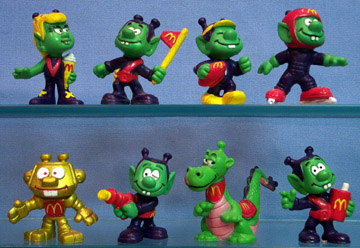 People make fun of the Snorks for being rip-offs of the Smurfs, but at least the Snorks had names, and some sort of a plot, and weren?t shameless corporate shills. Like the Smurfs, the Astrosniks were mostly defined by the props they were carrying, but there weren?t that many of them, they were just repainted dozens of times, in a variety of skin colors?including blue! So when the Smurfs hit it big in the U.S. in the early 1980s, it was an easy thing for McDonald?s to add the Golden Arches to each one, and bam?instant collectible. I don?t know which is more unbelievable?that these things were ever popular, or that Peyo didn?t sue these little German bastards into oblivion.

A fast food chain giving out toothpaste is like a pornography store giving you a free bible with every purchase. But several fast food chains did it, apparently realizing that if they were the one chain that DIDN?T do it, then they were going to look like the chain that WANTED kids? teeth to fall out. White Castle actually gave out toothpaste, sponges and soap with the likeness of superhero rapper Hammerman on it, but it didn?t do any good. After all, no amount of scrubbing will get M.C. Hammer, his lyrics or his bizarre cartoon out of our heads?especially when his picture is on the soap packaging.
g 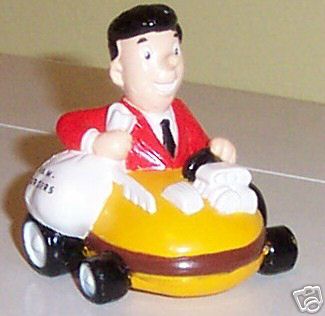 The Bag-a-Wag man from this 1992 line of Sonic toys seems to always have a bag of hamburgers on hand, making him a very Wimpy-like figure. (It?s like a Christ-like figure, except with more hamburgers.) Who is this nondescript, jacket-and-tie-wearing burgerphile? Why did Sonic decide that he warranted four different toys, all wearing the same suit? Who would have bothered to collect all four? We may never know, without doing more research, which I am not paid enough to do.

In October 1991, United Airlines and McDonald?s announced a plan under which United passengers could request a Happy Meal for their flight to Orlando, Florida. Early the following year, United Airlines jets with Ronald and Grimace as pilots became available as premiums. ?Now, I know it was a simpler time then, and at the time no one thought they were doing anything wrong, but this needs to be said: Clowns do not make good pilots. Nor do asexual purple mushrooms. Which is why we need to have more careful pilot screening processes?any sign of greasepaint or missing genitalia, and we should stamp that application ?Denied.?

Mayor McCheese. The California Raisins. Those obnoxious M&M jerk-offs. Corporate spokesfoods have been selling out their less articulate brothers for ages. But that never seemed to be the case with the McNugget Buddies. Whereas the M&Ms were very aware of the threat they faced from hungry celebrities, the McNugget Buddies always appeared oblivious to the idea that they might at any minute be lowered into some sweet?n?sour sauce. They weren?t selling out their simpler cousins, they WERE the simpler cousins. Factor in that the ingredients of McNuggets have often been called into question, and the idea of a Frankenstein McNugget takes on a whole new meaning. How many chicken parts went into this McNugget? Were they dug up in the dead of night? If fire is bad, is that why nothing at McDonald?s is actually flame-broiled? These are my questions.