Menu
Home
>
Comics
>
Warner Bros. Would Like You to Do Their Dark Knight Marketing For Them, Please

Phase 2 of Warner Bros.’ marketing plans for The Dark Knight (phase 1 having ended immediately after Heath Ledger kicked it and they had to shred all of their Joker-based campaigns) have begun with a Harvey Dent/Two-Face website at IBelieveinHarveyDent.com. 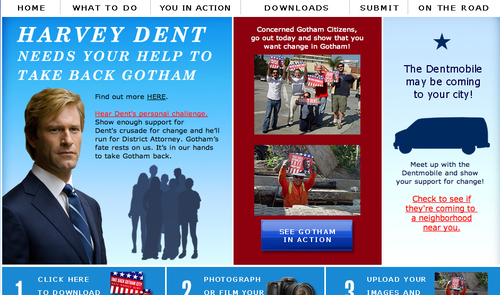 It’s not much of a site, actually; there’s very little of Aaron Eckhart as Dent, no mention of his political platforms, and no Batman; there is, however, a great deal of barely disguised begging from Warner for folks to virally promote both the site and the movie, by “showing their support for Dent” in public places and ways. The site has a number of printable Dent campaign banners, but does ask for people to, and I quote:

? Make up a ?Dent Dance? routine
? See if you can get up a Harvey Dent sign in every single window of your dorm building
? Turn your own car into a ?Dentmobile?
? Arrange a Dent parade down Main Street

…among other things, then upload them to the site, more or less so Warner Bros. can get drunk, sketch out some movie posters and shit like that. So! If you ever wanted to work as an unpaid intern in Warner Bros.’ marketing department, today’s your lucky day, I guess.