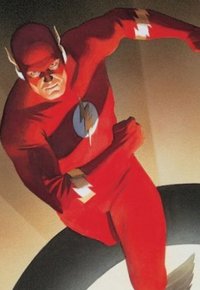 Touch?, DC. Touch?. As soon as I say you’ve got nothing going on, you resurrect Barry Allen, a.k.a The Flash (well, a Flash, at any rate), the one who died in Crisis on Infinite Earths back in the mid-’80s. We can blame Grant Morrison for this, as it’s his doing as shown in today’s 50-cent DC Universe release.

I could go on a huge tirade about how this is pretty much the last comic death to have meant something, and now every future comic death will lack any sort of legitimacy (in fact, I think the only hero who’s currently dead with any kind significance is Captain America, like he won’t come back), but I doubt any of you were thinking otherwise, Barry Allen notwithstanding.

I will say with this?after bringing back Supergirl, Earth-2 Superman, Alex Luthor, and all those parallel universes?DC has now totally destroyed everything they managed to accomplish with Crisis on Infinite Earths. Well done!