Erg. The Cartoon Network Upfronts were held today, where the channel announces its new shows for the remainder of 2008. Cartoon Network reminded folks of the existence of the CG Star Wars Clone Wars cartoon (more on that in a second) and announced a new Batman cartoon, unrelated to all those other Batman cartoons, subtitled The Brave & and the Bold. Sounds cool, right? Batman teaming up with heroes like Green Arrow, the Blue Beetle (the new Blue Beetle even!), but here’s the promo art: 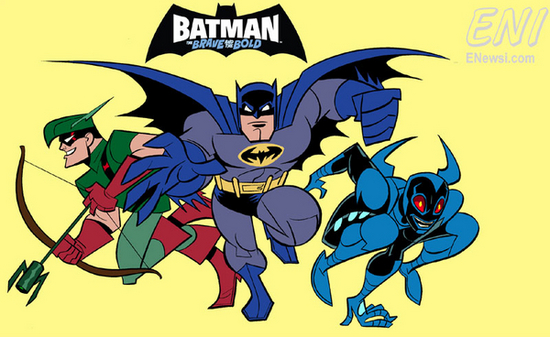 I swear, it’s like the Bruce Timm-designed Batman has been devolving over time. From Justice League to The Batman, the Batman designs just gets simpler, blockier and stupider. Blue Beetle looks all right, tho’. Anyways, TV Guide sez:

Rob Sorcher, Cartoon Net’s chief content officer, says The Brave and the Bold will be “equal doses of comedy and high stakes.”

Never a good sign, especially since The Batman was targeted to 8-year-olds. But on to Clone Wars?still hitting theaters on August 15, then going to CN, then to TNT. Fine. But listen to what George Lucas had to say about the series:

Okay. I have no problem with 11-year-old girls (except that one time, but no charges were filed?ahem), but if Lucas is trying to make a girl-friendly Star Wars, we’re all fucking doomed. There’s no one more out of touch with what the public wants in Star Wars than Lucas, and I equally doubt hes ha any idea what an 11-year-old girl even looks like. I’m betting his insane efforts to “girl it up” will enrage girls and boys alike.