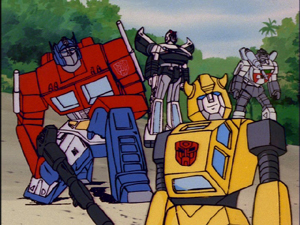 ?That you, Bumblebee?? Startled, Bumblebee turned around. Optimus Prime was looking over the partition, beads of water gleaming on his paintwork.

The idea of Optimus Prime peeking over a shower stall at a bathing Bumblebee is one I was happily take to my grave. Naturally, Bumblebee’s lust for his heroic leader makes the whole thing uncomfortable, as the VW bug doesn’t want Prime to notice his robo-rection (to coin a terrible term). And Prime doesn’t make it easy on the poor lad:

?Could you help me out?? the red truck asked. ?I can?t reach my back.? The yellow bug carefully made his way around the partition, watching his step on the wet tiles. He gazed up at his leader. Prime was covered in foam. Bumblebee watched, mesmerised, as a blob of the stuff slid slowly down Prime?s engine block and fell to the floor.

I would like you to try to imagine Peter Cullen, the original voice of Optimus Prime, speaking these lines as well as the later ones, as it makes quite a difference. The shower passes without incident, but that night, Bumblebee has a wet dream. I’m skipping over it, as it’s graphically messy and emotionally messy for me. The next day, Bumblebee takes a chance, and asks Prime to help him buff some spots on his back in Prime’s personal quarters.

Bumblebee gulped. It was now or never. ??you remember those posters we used to have in the base back on Cybertron ? ?Sometimes we all need a hug??? [The yellow bug said.] Optimus chuckled and for a second Bumblebee was afraid. Then a moment later the Autobot leader slid his arms around Bumblebee?s waist, pulling him flush against his cab and engine block.

?You mean like this?? he asked. Bumblebee shifted a little in Prime?s arms and stifled a moan at the demanding pressure in his pelvic unit. He looked up into Prime?s optics and decided to keep going.

?And? you remember how ?hug? didn?t always mean just a hug??

Bumblebee’s gamble pays off, as we know it would. Prime is nothing if not a warm-hearted leader of robots.

Prime chuckled. ?I?m surprised you didn?t come to me sooner,? he remarked. ?After that night in decon??

Bumblebee reactivated his optics and looked up at the big truck. ?I?m that obvious, huh?? He looked away, his voice dropping to a murmur. ?I was worried you?d say no. You know, leader, scout, chain of command stuff??

Prime stroked the yellow Autobot?s roof. ?Every Autobot is welcome in my bed, Bumblebee,? he murmured seriously. ?And you did save my life.?

And Prime gives and he gives until Bumblebee can’t take no more. But here’s where the story takes a dramatic turn. Although Prime is happy to be there for his subordinates, it turns out that the life of a leader can be a lonely one…but Bumblebee is determined to repay Prime’s kindness.

?It?s not that,? Prime replied awkwardly. He relaxed his grip on the smaller Autobot. ?It?s just ?? He looked down at his groin. ?I?m ? big.?

Bumblebee grinned at him. ?Hey, I can handle it.?

Prime nodded slowly. ?All right.? He let go of Bumblebee?s arm. Bumblebee carefully undid the bolts on Prime?s crotchplate, then removed it altogether.

?Whoa!? Bumblebee stared as Optimus? big pole extended from his crotch ? a thick, blue rod a staggering one point two metres in length. Prime looked at him, then down at the warm steel between his legs.

?I didn?t want to scare you,? he explained.

I shan’t spoil the rest for you; you’re more than welcome to read it here. And if you’re attending Botcon this weekend, please 1) don’t beat me up or 2) tell me about your fan fiction.