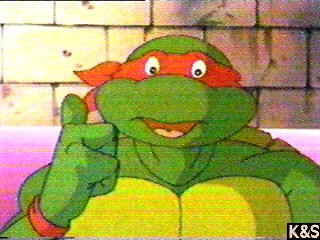 Ever wonder why only Raphael of the Teenage Mutant Ninja Turtles was so pissed off? So did author Loser tastic toaster, but he has a theory.

I promise Loser tastic toaster does not lie; this one-chapter story is all about Raphael’s inability to jerk off thanks to his brothers.

His life was so crazy. His shower was one of the few times he got some peace. With the foot and every day criminals he didn’t have a lot of time to relax. It was also the only totally private place he had to explore his sexuality.

Happily, the other Turtles don’t join in or anything, and poor April stays far, far away. This story has but one focus; that’s not to say Raphael can’t explore his kinkier side solo.

While I might have nightmares about anthropomorphic turtles sticking their fingers up their asses tonight, it might have been worth it for this little exchange:

So, does Raphael finally get to jerk off? I can’t imagine spoiling it for you, so you’ll have to read it yourself. Cowabunga!