There is a traitor in G.I. Joe’s midst, and shockingly,I’m not talking about the G.I. Joe movie. No, it’s the 25th Anniversary Duke figure in Wave 7 from Hasbro, in which one fan has noticed a small variant from the normal figure, which is usually packed with an American flag: 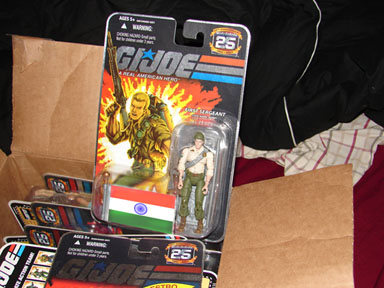 Duke, you bastard. You think you know a super-patriotic Aryan guy with a flat-top, and then this happens.

There are actually two explanations for this: 1) G.I. Joe has always been incredibly popular in India for some reason, and thus could be one of its variants that accidentally made it onto American shores, or 2) it’s a big, fat hoax. Either way, I may never trust again. (Via 16bit)