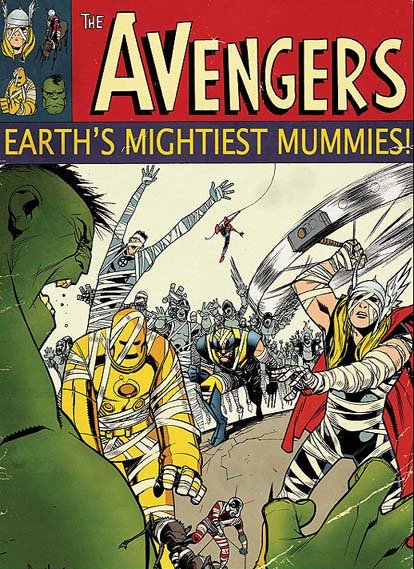 …and that’s turning their Marvel heroes in the goofiest of all horror villains, mummies, which I’ve learned of that to a tip from dapper TR commenter Steve Banes. It’s not a stand alone project, but actually a copy of Marvel Adventures #13, where the Hulk returns to Earth and finds “Earth’s Mightiest Mummies.”

The reason this is cool and Marvel Apes is not?well, besides the fact that DC did J.L.Ape a decade ago?is that mummies are so goddamned ridiculous, with their wrappings and ancient Egyptian-ness. I love the idea that someone went out of their way to kill, embalm and bandage up the Marvel heroes in the present day, then someone disturbed their sarcophagi and awoke their terrible curse. That sounds like a great read.

However, far be it from me to see something wonderful and not find a way to poop all over it. Sure, Marvel Zombies was great, and this looks like an even more fun version of that. But if it’s any kind of success, you know Marvel won’t stop?we’ll have a mediocre Marvel Vampires next year, followed by an absolutely terrible Marvel Werewolves, and finally, Creatures from the Marvel Lagoon, which will make me kill myself in despair.