Menu
Home
>
Cartoons
>
The 10 Geeky Childhood Crushes You Should Never, Ever Admit 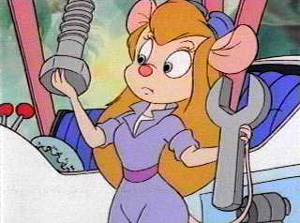 We?ve all had the conversation: the subject of embarrassing childhood crushes comes up, and someone blurts out that his introduction to the whole concept of liking girls came from April O?Neil in Teenage Mutant Ninja Turtles. We were all dumb kids back in the ?80s and ?90s, caught at some intersection of sugary diets, cartoon marathons and pre-pubescent ideas of romance. So there?s no shame in admitting our bizarre nerdy crushes on, say, Duke from G.I. Joe or Samus Aran from Super Metroid.

Yet there are those rare youthful crushes that you should never confess to, unless you want to become the resident weirdo of your office, dorm, or extended circle of friends. Through intense, embarrassing research, we?ve picked out ten such crushes to keep to yourself.

We wouldn?t believe that anyone at any age could find her crush material, but there are reams of message-board posts that prove us wrong. We imagine it?s connected to the same nerd-chick fixation that leads people to proclaim Velma as the best thing about Scooby-Doo, but Velma isn?t a goddamn mouse. And unlike, say, the entire female cast of Bucky O?Hare, Gadget wasn?t even intended to stoke pre-adolescent fascination. But that doesn?t matter to the alarming numbers of fans who are still making websites and writing 200-page fan comics about her. And unless you want to look like one of those fans, keep your mouth shut. 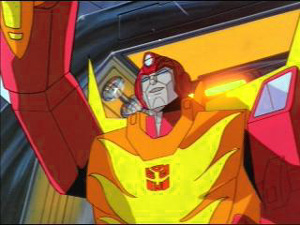 It?s entirely understandable that many young girls (and some guys) had crushes on Optimus Prime. With his commanding voice and bright blue eyes, he was everything that impressionable Reagan-era girls could want in a man. The same cannot be said for his successor, Rodimus Prime.

While he was tolerable when introduced as Hot Rod in the Transformers movie, as a leader Rodimus was required to whine about his insecurities at least once per post-movie episode. It may have made him more human than Optimus (which is stupid, because they?re robots), but from a romantic standpoint, Rodimus is the sort of over-passive nerd who?ll complain about everything until his date gets sick of it and politely ends the evening. Then he?ll go home to complain to his LiveJournal friends? list about how women just don?t like nice guys. 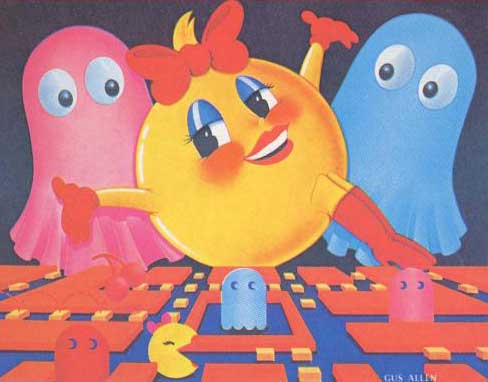 Some praise Mrs. Pac-Man for setting a standard among video-game heroines. These people have apparently never looked at the original out-of-game depictions of Ms. Pac-Man, who resembles some heavily made-up 1920s strumpet and is naked but for her bow. Even commercials for Ms. Pac-Man had her strutting around most salaciously. How feminist.

Ms. Pac-Man didn?t have any personality until the Pac-Man cartoon, which revised her into the matriarch of the Pac clan, with a decidedly less sexy characterization. It?s doubtful that any kids fell for the June Cleaver version of the gobbling yellow dot, but you never know. And though it may seem funny to bring up Ms. Pac-Man?s sexy past, there?s truth in every jest, and it?s best that you?re not the source of that jest. 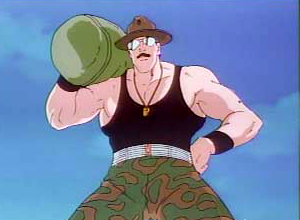 Just about every pro wrestler of the ?80s had female admirers, and no one would fault them for thinking that they might one day marry Hulk Hogan, Koko B. Ware or half of the Bushwhackers. Yet they?d have a hard time justifying any juvenile affection for Sgt. Slaughter, the doughy boot-camp gimmick who joined the WWF in 1980. Originally a ?heel? in wrestler lingo, Slaughter rapidly became a defender of all things good and American, even joining the G.I. Joe universe as a trainer and action figure.

There are several reasons to dislike Slaughter, aside from the obvious. Not only did he re-enter heel status by defending Saddam Hussein in the ?90s, but Slaughter also represented the precise moment when G.I. Joe changed from a goofy-fun action cartoon to a feculent swamp of bad ideas. His appearance in the G.I. Joe movie, in which he performs wrestling moves on an ancient winged snake-man in the name of the U.S.A., is enough to kill any affection.

BOYS #3) Cleo from Heathcliff and the Catillac Cats 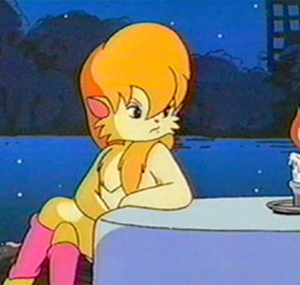 When Dic had space to fill in its Heathcliff cartoon, the studio invented the Catillac Cats (yes, CATillac), who consisted of the alley-bred Riffraff, his stereotypically inept gang, and his high-maintenance girlfriend, Cleo, who was ?a hottie? according to a number of YouTube posters.

This is disturbing, and not just because Cleo is a cat. As the series shows, she?s also a spoiled, vain, insufferable rich-bitch who probably gave many young viewers warped ideas about just what having a girlfriend entails. If Cleo is any indication, making a woman happy involves scouring the undersea ruins of Atlantis (sorry, CATlantis) for jewels, hi-jacking space shuttles to impress her, and beating the crap out of anyone who so much as lays hand on her. Confessing to some kid-level fixation with a character like Cleo will announce to the world that you have Issues With Women?even the ones who aren?t covered in fur.

GIRLS #3) Data from Star Trek: The Next Generation 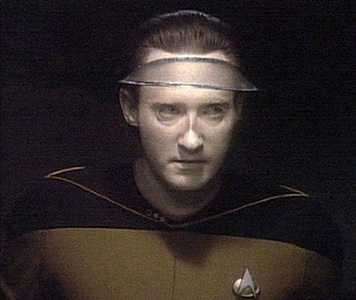 Ah, Data, the android helmsman whose innocent curiosities about human nature endeared him to us all. Data was the resident kid on the Enterprise, in ways that Wesley and Riker never were, and that may be why we can?t comprehend some young Star Trek fan having an actual crush on Data. We?re sure that some do (Star Trek was the birthplace of awful fan fiction, after all), but we really don?t need to hear about it.

Worf? That?s fine. Picard? Sure, go nuts. Geordi? Eh, maybe he got 10-year-old you to watch Reading Rainbow and dream of being an engineer. But Data? He?s Pinocchio. No one thinks that way about a puppet.

BOYS #2) Ariel from The Little Mermaid 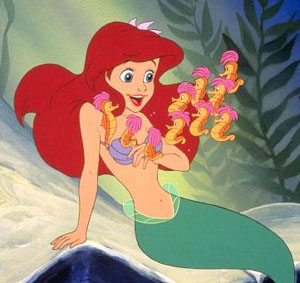 If discussions of Disney-related movies run on long enough, someone invariably pipes up with ?Ariel was hot.? This is invariably followed by someone else pointing out that Ariel was half-fish and, as the film ostentatiously tells us, also 16 years old (which lends a trailer-park pallor to her wedding at the film?s end). Then another person points out that Ariel turned into a human later on, and then the whole conversation is suddenly in a scary, scary place that no one really wanted to visit.

So don?t be the one who kicks off a discussion of crimes against nature. If you?re in need of a socially acceptable Disney crush, we suggest Esmeralda from the company?s bastardized The Hunchback of Notre Dame. She?s hot, legal, and literary.

GIRLS #2) Tails from Sonic the Hedgehog

The Sonic the Hedgehog series earns the dubious honor of having the most consistently screwed-up fans out of any video game. You?ll find nutjobs obsessing over everything from Super Mario Bros. to Final Fantasy to Half-Life, but hardcore Sonic devotees are, nearly to a one, completely insane. And there?s no better mascot for this imbalance than Tails, Sonic?s fox sidekick and the first sign that the Sonic games were attracting some messed-up people. Saying that you had a thing for any Sonic character is bad enough; saying it was Tails will get you laughed at even by people who still sleep on vintage Sonic sheets that?ve gone unwashed since 1992.

Other reasons never to admit your crush on Tails: he?s apparently 10 years old, he?s a fox, and his Christian name is ?Miles Prower.? 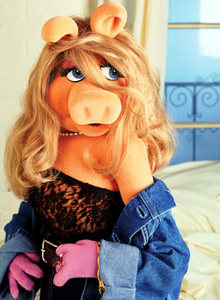 Muppets are perplexing creatures, since they frequently lived alongside humans in their movies, on their TV show, and even during the Muppet Babies cartoon. It?s understandable, then, that some young fans might?ve gotten the wrong idea about just how acceptable Muppet-human love could be. Miss Piggy, for one, often had real-life actors fawning over her. She even drew a lustful Charles Grodin away from his harem of fashion-model henchwomen in The Great Muppet Caper.

But having a crush on Miss Piggy says something about you. It says that you have a deep, primal desire to find a woman who will violently hurl you across the room at the slightest insult. And that?s something best kept in the bedroom. 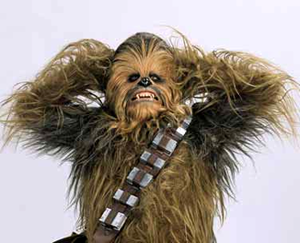 Star Wars encompasses such a broad range of fans that there?s likely at least one geeky admirer for every character, even the buglike robot 4-LOM and the robotlike bug Zuckuss. So we?re sure that more than a few young Star Wars fangirls (and some boys) fell for the Mighty Chewbacca?s monosyllabic dialogue and penchant for dismembering people who beat him at space-chess. He?s even a family man, if the Star Wars Holiday Special is any indication, and he?s so tough that those awful Star Wars novels needed to hit him with an entire planet to kill him.

But Chewbacca?s also a seven-foot alien monkey, so it?s a bit strange to crush on him, even through the sieve of childhood. Don?t mention him unless you want more attention from that large, hairy guy who works in the mail room.