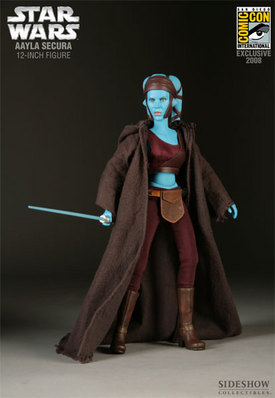 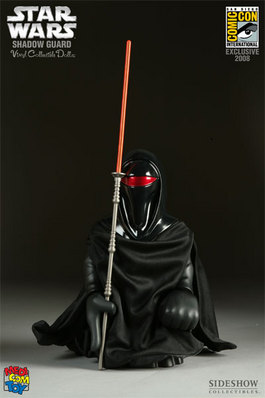 If you thought I was being racist, shame on you. It’s not my fault that Sideshow Toy has decided to make the lovely and dead Jedi Aayla Secura and a midget in a black Royal Guard outfit as their Star Wars San Diego Comic Con exclusives. Aayla is a new 12-inch figure, and as you can see, she has nice fabric robes which will hopefully be machine washable for when the fanboys wank all over ’em. The Shadow Guard is part of Medicom’s Star Wars vinyl collectible doll, which would be awesome if it were also a 12-inch figure instead of a goofy vinyl style thing, but it’s not, so I’ve stopped caring. (Via Jedi Insider)