If you’re flying in England in the next few months, you’d be well-advised to keep your nerdy T-shirts at home. See, the Sun reports that 30-year-old Brad Jayakody was about to fly to Germany wearing this shirt: 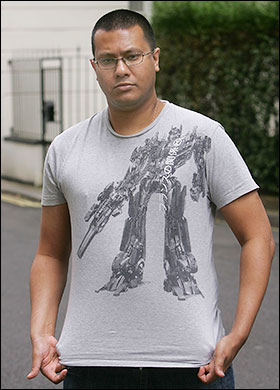 “But then the guy told me to stop and said ?you cannot get on the plane because there is a gun on your T-shirt?.”

The top has the Transformers film character Optimus Prime on the front.

Brad, of Bayswater, West London, added: “It?s a cartoon robot with a gun as an arm. What was I going to do, use the shirt to pretend I have a gun?

“I was flabbergasted. I thought the supervisor would come over and see sense, but he didn?t. After I changed he said if I changed back I would be arrested.”

Yes, a picture of a cartoon robot holding a cartoon weapon is now considered too dangerous to bring onto a plane. Thank God Jayakody wasn’t wearing a G1 Megatron shirt?he’d have been shot on sight.