Menu
Home
>
Comics
>
The 10 Worst Women in Refrigerators (i.e., Cases of Violence Against Women in Comics) 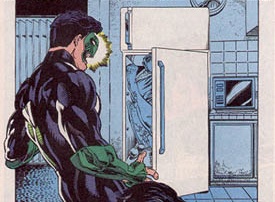 Superhero comics are often seen as the purest form of escapism. In them, men can fly and fight and do heroic things and meet girls and have a secret identity?you know, all the stuff men secretly want to do. Women?not so much. In fact, outside of comic books specifically written for women, female characters in superhero books have a pretty tough time of it. And by ?tough time,? I mean horrible, horrible things happen to them?so much so that the term “Women in Refrigerators” has been coined to describe the phenomenon (Curious why? Wait until you get to #2). Granted, in most comics violence is the norm and people get hurt, but these aren?t just superheroine fights gone bad?these are ten of the most egregious examples of female characters (many of them not super at all) being hunted down and violated, especially by the men writing them. (Note: If it’s not a superhero book, it’s not in here. Otherwise most of this list would be all R. Crumb and Sin City comics.) 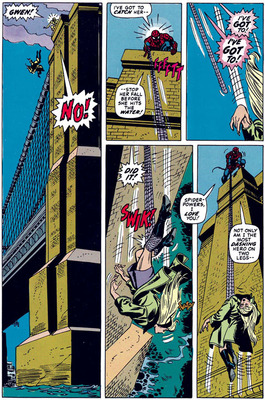 Possibly the most famous death in comics, Gwen Stacy was dropped off of the Brooklyn Bridge by the Green Goblin, and when Spidey tried to save her, her neck snapped, killing her. It gave Peter Parker a much-needed new supply of angst, which he carried around with him for a while, at least until he hooked up with swinging go-go dancer red-head Mary Jane. On a side note, MJ was the one dropped off the bridge in the movie, and of course, Spidey saved her. Then, in Spider-Man 3, they dropped Gwen Stacy off a building, and Spidey saved her, too! Either they’ve learned the error of their woman-hating ways, or everybody’s neck gets snapped in Spider-Man 4. 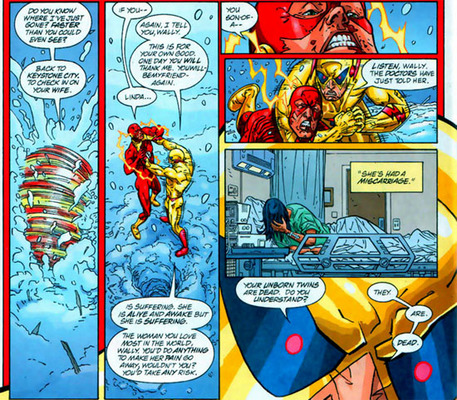 Flash baddie Professor Zoom may have had a silly name, but there’s nothing silly about plain old Zoom, the villain’s successor. Originally a partially paralyzed criminal profiler, superfast psychopath Zoom wants the Flash to be a better hero by understanding tragedy, so he decides to inject some tragedy into the Flash’s life, specifically by killing the hero’s wife, Linda Park. While his attempt failed, his battle with the Flash created a sonic boom, injuring Linda and aborting the twin fetuses in her uterus. Granted, the Flash later reversed that damage during another fight with Zoom by traveling back in time, and Linda ultimately gave birth to her children, who became superheroes themselves, but that’s just marketing. The phrase to focus on here is “sonic boom abortion.”

Although she?s best known as the purple-haired X-Man Psylocke (okay, not that well-known?it?s not like she was in the movies or anything), before she joined the team she was a supporting character in Captain Britain. As the sister of Brian Braddock, she was next in line to replace him when he took a leave of absence from the role of Defender of England?unfortunately, that put her in the past of a gentleman named Slaymaster, who, despite his completely nonthreatening name, took it upon himself to gouge Betsy?s eyes out. She later got robot eyes from another dimension and her brother crushed Slaymaster?s head with a rock, but y?know, that doesn?t make it okay.

7. Black Cat (Spider-Man/Black Cat: The Evil That Men Do) 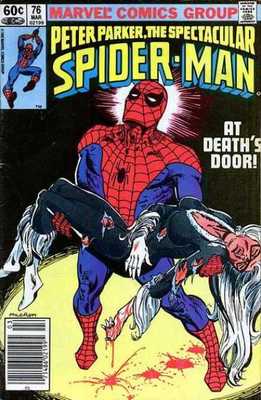 The Black Cat could be called many things. Ripoff of DC’s Catwoman? Uh, yeah, she’s an acrobatic, cat-themed cat burglar. Spider-Man love interest? Sure, she’s a shameless flirt, although she prefers it when he wears the costume. Victim of Kevin Smith’s misguided sense of storytelling? You betcha. Smith earned accolades for his darker take on Daredevil (see below), and followed it up with a mini-series on the white-haired Cat, deciding that she needed something in her life that would explain her kinda weird behavior. So after having a drug dealer dope her with heroin and try to rape her, he reveals that she’s already been raped once, in college. Was Smith trying to enlighten the public about how common rape is in this country? Sure. Was it a bold move for Marvel to make one of their main characters a rape victim? Absolutely. Does it suck to be Black Cat now? Uh-huh.

When Dragon met Debbie, she was a troubled young woman living with her mother in an apartment down the hall. One night, her mom locked her out to punish her, so Dragon invited Debbie to stay at his place, and they hooked up, despite Debbie seeming naive and kind of child-like and Dragon being a green guy with a fin on his head. The next morning, she went to answer a knock at Dragon?s door and was immediately shot point-blank in the head. The shooter was her ex-boyfriend, Ronald Dimple; Debbie?s mother had told him where Debbie was. Dragon became depressed after this, and did not get a new girlfriend for several issues. Debbie later came back as a zombie. 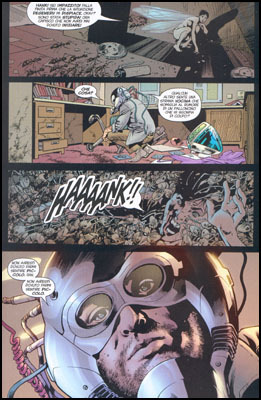 Even with a total do-over, the size-changing Wasp can?t get a break. When Marvel introduced the Ultimates, an alternate-reality version of the Avengers, it looked like a fresh start for all involved, including Janet Van Dyne. But things quickly took a turn for the worse. In the regular universe, the Wasp had gone 40 years with only one instance of domestic violence, a backhand from her then-crazy husband Ant-Man, but the Ultimate Universe decided that they didn?t want to wait that long. Six issues into the series, the Wasp managed to incur the wrath of her jealous husband, and when he hit her, she shrank to a tiny size to escape him. However, he then proceeded to spray her with Raid, THEN he used his telepathic helmet to order (relatively) gigantic ants to attack her. She was eventually found and hospitalized, prompting Captain America to track down her fugitive husband and beat the snot out of him. 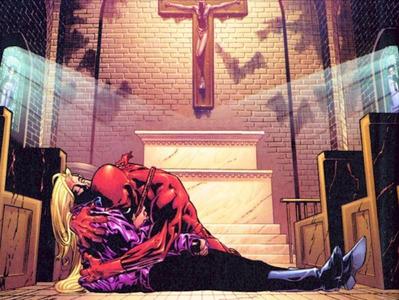 Bullseye has killed a lot of people, including two women in Daredevil’s life: Elektra and Karen Page. Now, we could have chosen Elektra because she got stabbed in the chest by Bullseye with her own sai, but she went into that fight to the death with her eyes open. (Also, she totally came back to life.) Meanwhile, Karen Page here was given a pretty tough row to hoe. She moved to L.A. to become an actress, got into porn (like you do), got hooked on drugs and then was impaled with one of Daredevil’s batons, hurled by Bullseye, while protecting the hero. Granted, she chose to do that, but it still happened to her, and redemptive though it was, it was a shittty end to a shitty life. You can thank Kevin Smith for that one, too, although by that point it was more of a mercy killing. 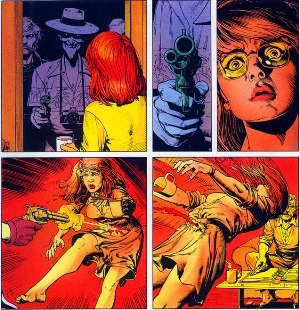 While she fought crime for years as Batgirl, it was the fact that she was Commissioner Gordon?s daughter that caused Barbara to receive a visit by the maniac known as the Joker. In an attempt to drive the Commissioner insane, the Joker showed up at Barbara?s house and shot her in the stomach, then proceeded to remove her clothes and take pictures of her. He showed these pictures to her father to try and break him, but the Commissioner remained sane and was freed by the Batman. Barbara, however, was paralyzed — the bullet lodged in her spine, and she never walked again, becoming the wheelchair-bound information broker known as Oracle. Also, they gave her a crappy TV show, so, you know, double whammy. 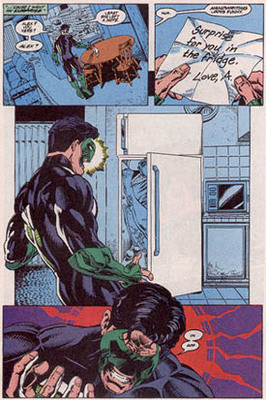 When comic book artist Kyle Rayner was handed a magic ring by a blue midget, he thought it was the greatest thing that had ever happened to him. But little did he know that a paid killer known as Major Force would come looking for the ring, and would torture Kyle?s girlfriend to get it. Kyle came home to find Alex crammed into her refrigerator, thereby inspiring the catchphrase, “women in refrigerators,” as well as a Website speaking out against violence against women in comics. It’s also a handy reference tool for a writer trying to create informative entertainment out of it! [Author pulls on collar a la Rodney Dangerfield?but when he was funny, not when he was an abusive father in Natural Born Killers.] 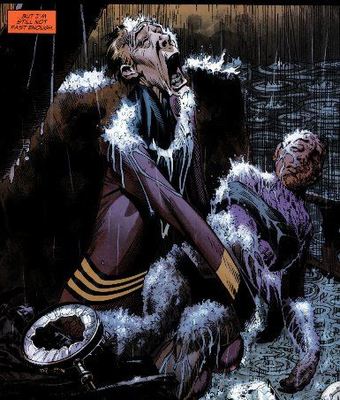 Sue Dibny was the wife of Ralph Dibny, the Elongated Man. The two were always the happy couple of the superhero set, with Sue often acting as den mother to the Justice League, and the pair did detective work on the side, like some sort of stretchy Nick and Nora Charles. Then came the Identity Crisis mini-series.
Right off the bat, Sue gets horribly burned to death in her home. The culprit is unknown, but based on the evidence, the League suspects it to be Dr. Light. Now Doc Light is usually a D-list villain, and he actually had his name stolen by a superhero once, but we find out through a flashback that one day, when Sue was hanging out on the Justice League satellite (by herself, in space), Dr. Light somehow managed to get aboard. Yes, a supervillain had somehow gained access to the League’s high-tech HQ (in space), and that was when he decided to rape Sue to within an inch of her life. The League showed up soon after to pull him off of her, but the damage was done, and they had to blank Sue’s memory to make her forget it. I wish they could do that to my memory?when I close my eyes, I keep seeing Dr. Light’s rolling eyeballs and wagging tongue as he violates a minor character who never hurt anybody.