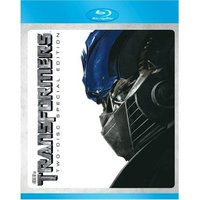 ? Transformers
Michael Bay’s opus finally comes to Blu-ray, so you can see Bumblebee’s urine cascade down and splash onto the head of John Turturro in glorious high-definition.

? The Big Bang Theory
Despite being made by the guy who does Two and a Half Men, this geek-com is getting decent review. Any of you watching it? Is it worth checking out?

? Quark the Complete Series
I’ve never heard of the 1978 sci-fi spoof show, but it’s already sold out on Amazon.

? Next Avengers: Heroes of Tomorrow
The long-dreaded new Marvel direct-to-DVD movie has arrived. Someone was giving me shit about how this is movie is for kids, and thus cannot be judged. Which is bullshit, but more importantly?I thought the whole point of these Marvel DVDs was that they were being made for the damn fans, who certainly would rather see the actual Avengers than these ridiculous, huge-headed rugrats. And frankly, what kid wouldn’t also rather see Captain America, Thor and Iron Man as opposed to their totally unknown, inexperienced spawn? That dog won’t hunt, monseigneur.

? Gurren Lagann Vol. 3
Perhaps not coincidentally, the Sci-Fi channel took a break from airing this Gainax anime, so this DVD will be the first place to see these episodes (legitimately). It obviously worked?it’s also sold out, but that might be because it has a totally awesome cover.