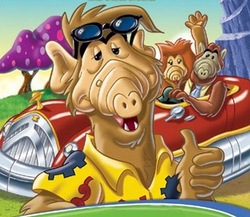 There’s something woefully depressing about having relics from your childhood, ripped from their pop-culture coffins, dusted off, and then repainted, repackaged, and re-sold to you some twenty years later. They were properties, cartoons, toys that entertained us back when our standards for entertainment had little to do with things like “quality,” as those words hadn’t entered our vocabulary. It’s vaguely insulting, when you think about it, that people assume our standards for entertainment remain unchanged since being eight years old.

The saddest thing, though, is that it’s completely, horribly true. Try as we might to study Chaucer, collect Criterion Collections of Fellini films, and “get into” Sufjan Stevens, we are still drooling eight-year-old retards on the inside. The G.I. Joe and Transformers 2 movies will soon delight those inner, drooling eight-year-old retards everywhere, replete with floods of new toys, comic books, concept albums, everything. And after that, we have Voltron, Thundercats, He-Man, and practically every big ’80s property under the sun optioned by Hollywood, eager to turn misbegotten nostalgia into money. Still, a line must be drawn in the sand somewhere, that there are certain things we left behind as pre-pubescents that need to stay that way. The line starts here.

7) Attack of the Killer Tomatoes

Only in God’s America could there be a half-hearted attempt in the late ’80s to turn a low-budget, largely unfunny ’70s send-up of monster movies into something of an ongoing franchise. There was yet another low-budget, largely unfunny sequel (that, let it be said, had it’s moments, such as a timely send-up of product placement, and a young, confused George Clooney!, a Saturday morning cartoon series, and reams upon reams of merchandise. Luckily, the Powers That Be have since decided that the fact that nobody watched the cartoon show or bought any of the toys that the public found the one-note joke of wacky killer tomatoes had already run its course. Still, this is America, and whoever owns the rights to the “Killer Tomatoes” name, desperate to suckle at the dried teat of opportunity, could con somebody with money or influence into giving the “franchise” another shot. Who’s thinking an anime-style adaptation? Killer Tomatoes Warriors X-Hyper Breast Fighters! Or perhaps a card battle game!

We’ll forgive the good people at Rankin-Bass for cannibalizing their own ideas, considering they produced both shows. If an idea works once, it’ll work again, especially IN SPACE. Stealing your own ideas may make you a whore, but at least you’re an ethical and tenacious whore. Should the Thundercats movie make lots of “scratch,” and by that I mean an insidious pun for money, then may the harsh judgment of the afterlife weight heavily atop the battered souls of those that think Silverhawks: The Movie! would be anything but a terrible idea.

5) Jem and the Holograms

Don’t get me wrong. I approve of Jem in theory; it jibes well with my proto-neo-feminist views, and it was empowering girls and spreading “girl power” back when you could still only buy Barbie dolls that came with a “Glass Ceiling” playset and were two months pregnant. I disapprove of Jem in every other way because it sucks.

Luckily for us, according to Jem’s needlessly informative Wikipedia entry, various rights issues are blocking Jem from the 21st century comeback she doesn’t deserve. Sayeth the creator of Jem, Christy Marx:

“I would like to see that happen. I don’t want to go into a lot of detail, but the whole rights situation for Jem is very, very complicated. Believe me, if there were a simple straightforward way to do it, it would be done. But there are some very big complications that are in the way at the moment.”

Why, that’s totally outrageous! And very lucky for us all.

4) Garbage Pail Kids
Mup
Perhaps the only entry on this list that can be said to come from the mind of a Pulitzer Prize winner, the Garbage Pail Kids started off semi-innocently enough as a series of goofy trading-card knockoffs of the then-ubiquitous Cabbage Patch Kids, thereafter there were several attempts to branch the “series” out into other media?namely, one of the worst films ever made, and a cartoon series that was completed, but never aired outside of Europe. I guess that would classify the Garbage Pail Kids as more of a “miscarriage” than a “franchise,” but the cards have recently made a bit of a resurgence, and the world is still wanting for more terrible, unremittingly awful movies?go out and make those dreams a reality, Topps Trading Card Company that owns the Garbage Pail Kids! I dare you.

It’s shocking to think about how popular Muppet Babies was, often airing in 60 or 90-minute chunks throughout the entire latter portion of the decade. Whatever fond memories it may elicit, it’s influence on other cartoons is so malign, companies are still attempting to slap diapers on whatever cartoon characters they own the rights to. I’m sure pedophiles everywhere are delighted by the prospects of Betty Boop Babies, but I’ll pass, thanks. Plus, one of the head writers, Jeffery Scott, openly bragged about blatantly inserting various Scientology concepts into the series:

“I also used one of L. Ron Hubbard’s discoveries in the field of study in a Muppet Babies episode I wrote. Hubbard discovered that the number one barrier to study was the MISUNDERSTOOD WORD. He found that the moment a student went past a word he/she didn’t understand the rest of the material became more or less “blank”. If I told you to attach the creddlefur to the neuron, chances are whatever I said after that wouldn’t make much sense. So in a “Muppet Goose” episode I wrote Piggy was reading Little Miss Muffet, and when she read “sat on a tuffet” her imagination went blank until she cleared up her misunderstood word. As a matter of fact, Hubbard’s Study Technology is being used in schools around the world and is extremely effective, though still a little bit controversial (probably because it’s so simple and therefore makes teachers who couldn’t get their kids to learn look pretty dumb).”

Clearly, the Muppet Babies‘ dangerous, dogmatic views must lay fallow, lest the world become once again infested with more Scientologists. There are already enough people in Hollywood that think dead aliens rule the world without adding Rowlf the dog to the list.

What the hell is Alf, anyway? Why does he speak such perfect English? Why is he so erudite? Was his insatiable appetite for cats ever properly explained? These are the questions raised by Alf’s inexplicable rise to prominence. Actually, never mind, it’s really not that inexplicable?Alf was basically a compound of two of the biggest fads in the 80’s: ripoffs of E.T., and high-concept sitcoms.

No matter the unexplained intricacies of the Alf universe, because it was popular as hell. You couldn’t swing a figurative dead cat without knocking over monoliths of Alf dolls and puppets stacked biblically high. And Alf Tales, the Saturday morning cartoon where Alf rocked a sweet Jimmy Buffet-esque Hawaiian shirt and regaled little Alf-lings with sordid stories of whimsy and wonder. And yet still found time to lecture drug-addled teenagers about the dangers of crack addiction with snappy, wise-acre comments!

Several futile attempts via C-list star-studded TV movies were made to thrust Alf back in to the public eye. Today’s savvy viewers, however, were simply not having Alf’s cat-munching attitude. Is the time right in the latter half of the decade for a Dreamworks-produced Alf CGI movie adventure? I think so! But I’ve been looking for a valid reason to kill myself anyways.

If there’s any potent argument against turning popular movies into “franchises,” The Karate Kid is it. Because the first movie is pretty swell, albeit dated – which makes it all the more lovable for those of us staunchly refusing to enter the adult world in the 21st century. Ralph Macchio is the kind of plucky smartass every kid in the ’80s wished to be, and Mr. Miyagi, alongside Doc from Back to the Future, was the kind of otherworldly, sagely old person-friend we all wanted to have.

Then, the sequels. The Karate Kid goes to Japan and saves kids from a typhoon and also fights ninjas who are also kids? Hilarious, but definitely not heartwarming. The Next Karate Kid is a complete failure of a movie, but it was successful at least in convincing Hilary Swank that she somehow had a career as a serious actress. That is an act that I find unforgivable. Her face scares me; it looks like a bullfrog mating with ancient Sumerian pottery.

But now, with mixed-martial arts all the rage, can’t you imagine an edgy remake? Perhaps starring Blake Lewis, or perhaps one of the Jonas Brothers? Pat Morita is dead now, the poor soul, so how about Ken Watanabe? Or some other generic old Japanese guy? I could probably write this script in three days, leave enough space for a few Maroon 5 songs, and make enough money from selling it to live the rest of my days on a deserted island, wasting away alongside aging strippers and porn stars until heroin completely replaces oxygen in my bloodstream. And isn’t that what reviving long-dead, rotted ’80s franchises is all about?