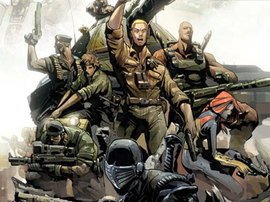 The original G.I. Joe cartoons from the 1980s will always be better known than the G.I. Joe comic books for the sole reason that there’s far more TV zombies than comic book nerds. But G.I. Joe fans have fond memories of the cartoon, which was an entertaining and awesome addition to the after-school line-up, bookended by Transformers and Thundercats. However, those of you who didn’t read the comic book didn’t know what you were missing. Guided by scribe Larry Hama for almost the entirety of its 155 issues and spin-offs, Marvel’s G.I. Joe comic book was much more harsh, dangerous, and even realistic than its cartoon counterpart. Hama told compelling, serious stories that benefitted from his knowledge of military terminology and protocol. And although that series wrapped in 1994, Devil’s Due Publishing revived and continued the series from 2001 through 2008 with some participation from Hama.

Fans have been divided over Hasbro’s decision to give the comic book license to IDW Publishing, who will be rebooting the G.I. Joe comic book continuity that has been in place since 1982. The good news almost everyone can agree on is that Hama will be writing the IDW series. In honor of the recently deceased G.I. Joe comic book universe, here are eight clearest ways in which it kicked its cartoon counterpart’s ass.

8) It Had Crossovers with Transformers 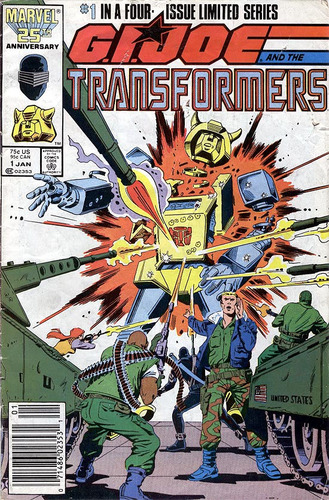 This is at the bottom on the list because so many G.I. Joe fans hated that the mostly serious G.I. Joe comic book (as serious as it could be with guys like Cobra Commander and Destro running around) was intruded upon by the more sci-fi transforming robots from another planet. And they have a point. But think about it; how many of us as kids wanted to see Transformers and G.I. Joe cross paths in the cartoons? Aside from brief, veiled appearances from older versions of Flint and Cobra Commander in the Season 3 episodes of Transformers set in the futuristic world of 2006, and a character that was suggested to be Flint’s daughter, it never happened. But in the comic books, it happened several times. The two goliaths of 1980s children’s fiction collided twice during Marvel’s run and it was the flawed spectacle you’d imagine it to be. The Autobots of course teamed with G.I. Joe, and the Decepticons with Cobra. One highlight of these comics was, due to a misunderstanding, G.I. Joe blew the shit out of Bumblebee and then laughably attempted to rebuild him as Goldbug, a job later completed by Autobot medic Ratchet. It was all a continuity headache, though, and more modern comic book crossovers have been set in alternate timelines.

7) Cobra Wasn’t the Only Enemy

Everything about the U.S.A. was squeaky clean in the cartoon, but the comic book had the Joes facing not only an outside threat from Cobra, but from enemies within their own government. The Jugglers were a shadowy group of generals that met secretly at the Pentagon to oversee G.I. Joe and ultimately sought to use the special mission force toward its own ends. Many of the members were corrupt, doing such unsavory things as supporting Serpentor in Cobra’s civil war and then trying to blame the Joes for the resulting fiasco. The Jugglers had various Joes arrested throughout the years and cut back the team’s roster, putting most of the Joes on the reserve list. Members of the Jugglers also took part in helping Destro’s son try to take over America with nanites, worked with enemy organization the Red Shadows, and gave the Joes a new commanding officer, Generay Rey, who was actually a clone of Serpentor. It’s said that it’s best to know your enemies, but this group was almost as bad as Cobra!

6) It Starred the Original G.I. Joe

There’s always been a divide between fans of the 1980s “A Real American Hero” G.I. Joe and fans of the 1970s G.I. Joe, the one with fuzzy facial hair and the Kung-Fu Grip that regularly conducted assaults on Barbie’s dream house. The G.I. Joe comics bridged that gap by introducing Joe Colton, the original G.I. Joe soldier. He was a Vietnam war hero who was appointed by JFK himself to create the original Joe team. Years later, the G.I. Joe team we know met Joe and G.I. Jane (the nurse from the 1970s toyline, not Demi Moore) and Joe went on to join the new team that bore his name. And when long-time G.I. Joe commander Hawk was paralyzed by Zartan, Joe once again took command of the Joes.

The G.I. Joe cartoon was downright awesome until the movie decided to screw it all up by announcing that Cobra was founded by a bunch of retarded mutant men who once ruled the Earth before the Ice Age. And Cobra Commander was an actual friggin’ snake man! It was a horrible way for Sunbow to wrap up the G.I. Joe cartoon and the DIC cartoons that followed, while inferior all-around, had the good grace to mostly ignore that whole travesty.

Hasbro forced Larry Hama to include a lot of crap in the comic book in order to promote the toys, good examples being Hardball, G.I. Joe’s very own baseball player, and Raptor, Cobra’s accountant who dressed like Harvey Birdman. But when it came to including Cobra-La, Hama gave a big middle finger to Hasbro and said he was not putting them in his awesome comic, no way in hell. Hasbro folded. Larry Hama kicks ass.

The original G.I. Joe: A Real American Hero toyline lasted from 1982-1994, a damned impressive run. The two cartoon series ran from 1985-1987 (including the movie) and from 1989-1991. Marvel’s comic book lasted the whole life of the toyline and provided adventures starring characters who didn’t have a cartoon to provide them characterization. Just like Marvel’s Transformers comic book, it became the only place to learn more about Johnny-come-lately characters.

As much as we all loved the cartoon’s Cobra Commander (voiced by the late, great Chris Latta), you have to admit that he was the worst, most ineffective leader of a terrorist organization, ever. His first problem was the ridiculous schemes he came up with. Oh, they started out somewhat reasonable; building a device to control the weather, developing a transportation device and then proceeding to beam away the Eiffel Tower, etc. But before long, Cobra Commander was pulling crazy crap like having the Dreadnoks record a hypnotic rock song and starting a TV network to air original, wacky Cobra programming and redone endings to old movies. Yes, Cobra Commander was sweding movies long before Jack Black, and providing bizarre TV programming a couple years before Weird Al took over UHF. But the worst part was that Cobra Commander ALWAYS failed. His track record was so bad that his own troops rebelled and replaced him with that clown Serpentor. Now, that’s desperation.

Sure, Cobra Commander in the comic book had some schemes with a scope that rivaled his cartoon counterpart, like using a nondescript American town as a secret Cobra base, and selling dozens of Techno Dromes that sent out signals inciting people to riot, thereby increasing Cobra’s weapon sales. But the comic books took Cobra Commander places that we never saw in the cartoons. Most shocking was that after his own people tried to assassinate him, he came back with a vengeance and locked all of his enemies in a freighter inside a volcano. The kicker was that the rations in the ship were spoiled, leading to gruesome deaths for the likes of Dr. Mindbender and Raptor. Yikes! In the more recent comics, Cobra Commander personally infiltrated the White House and came within a hair of manipulating the world into fighting World War III. And best yet, he was not secretly a mutant snakeman; Cobra Commander was originally a disgruntled used car salesman who was so angry at “the system” that he launched pyramid schemes in order to fund and start Cobra. In the comic books, Cobra Commander was just one angry, insane bastard you did not want to mess with.

The G.I. Joe cartoon was notorious for avoiding the use of bullets in lieu of energy beams and always having pilots parachute away from crashing planes in an effort not to offend the sensors. The cartoon would have you believe that war is like a game of Laser Tag. The only character that was actually seen to die in the G.I. Joe cartoons was Headman in the DIC series, but that was okay since he was a drug dealer. Duke was supposed to have died in G.I. Joe: The Movie after Serpentor stabbed him with his snake (seriously), but extra dialog was added at the last minute to confirm his recovery after kids around the world were traumatized by the death of Optimus Prime in Transformers: The Movie.

Meanwhile, the Joe/Cobra war was hell in the comic books. Several G.I. Joe, Cobra and other characters met their demise in the pages of G.I. Joe. The most brutal battle in the Marvel series saw the death of 15 Joes, including favorites Doc and Quick Kick, and most of Battle Force 2000. The most shocking death, however, occurred in the Devil’s Due comics when new villains the Red Shadows killed Lady Jaye. It was an unpopular move with fans, many who agree that it is the one thing they are looking forward to being rebooted in the IDW series.

1) It Made Snake Eyes Awesome 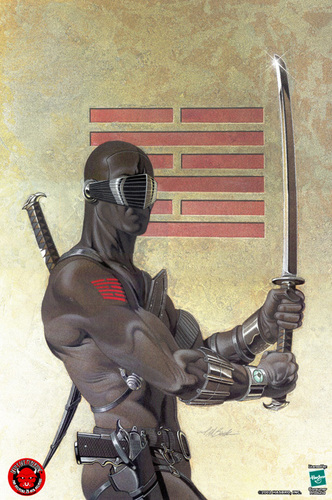 The cartoon writers just didn’t know how to use Snake Eyes, a character who was mute. He was a loyal teammate who showed up a handful of times, but the writers soon deemed him comic relief and had him breakdance and dress up as Boy George. Good Christ.

But Snake Eyes was the star of the G.I. Joe comics, which fully conveyed the awesomeness kids knew he had from the moment they saw his action figures, especially the one that came with his pet wolf, Timber. In fact, Marvel’s comic book series for a time added “starring Snake Eyes” to the title, with his name in a much larger font that “G.I. Joe.” In the comics, Snake Eyes is a commando and a ninja who shares a legendary rivalry and friendship with Storm Shadow. His origin is tied in with Cobra Commander’s, as both men’s family members were killed in the same car accident. Snake Eyes was disfigured and lost his ability to talk in combat, but expresses emotions through body language and the reactions of those around him. He is both noble and deadly, maintaining an aura of mystery since he keeps his face hidden under a mask. But the most awesome part is that he’s totally banging G.I. Joe hottie Scarlett, who the cartoons deemed must be infatuated with the all-American Duke. Take that, Real American pretty boy! Ninja for the win!