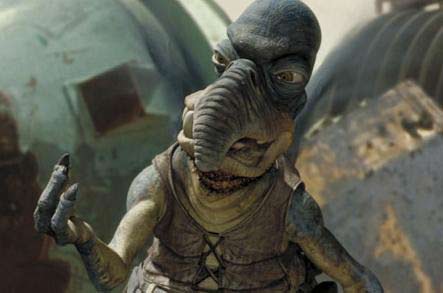 October 3rd is the day when Clone Wars debuts on Cartoon Network. You can either set your TiVos for 9 p.m. EST, or begin drinking heavily at about 7 p.m. and hope you’ll be passed out by then. The first episode is actually Yoda-centric, but do you remember Watto? The hook-nosed, beady-eyed, greedy, slave-owning alien with the gravelly Jewish accent from The Phantom Menace? You know, the old-school, 3rd-18th century Jewish stereotype who could fly? Get ready for a whole planet of him. From the Cartoon Network press release:

Jedi Master Yoda is on a secret mission to forge a treaty with the King of the strategic system of Toydaria when his ship is ambushed by Count Dooku. Yoda and three clone troopers must face off against Count Dooku’s dreaded assassin Ventress and her massive droid army to prove the Jedi are strong enough to protect the king and his people from the forces of the war.

As determined as George Lucas clearly is to make the Star Wars galaxy the most racist fictional series in the world, I’m actually more concerned that the Clone Wars movie wasn’t broken up into the first three episodes. Does that mean the movie wasn’t three hastily pasted together episodes? Was the Clone Wars movie truly designed as a movie, and that was the best they could do? If you have a bad feeling about this, yeah. I know. We all do.