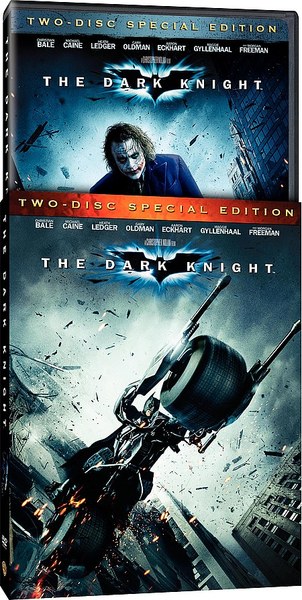 Hmm. So the Iron Man DVD is coming out tomorrow. I’m sure it’s just a total coincidence that Warner Bros. chose this past weekend to announce the DVD and Blu-ray of The Dark Knight, which will hit on December 9th. Since I figure we’ll all pretty much be buying it, here’s the deal: there will be single-DVD releases in both widescreen and full-screen. We don’t want that. We want either the two-disc DVD, which includes:

…or the 2-disc Blu-ray version, which has all those special features plus:

Oh, and there’ll be a special special edition of the Blu-ray version, with a tiny Batpod replica. I was very excited about this DVD until I starting writing this article, and realized regular DVD owners are totally getting shafted. Fucksticks. (Via The Digital Bits)