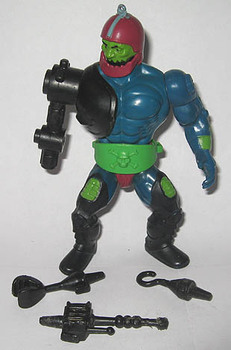 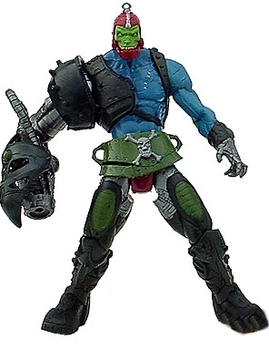 See, a few weeks ago, Mattel confirmed to ToyNewsI that there would be no?as in zero?2002 He-Man designs in their upcoming, collector-oriented Masters of the Universe Classics line. So even if they made new figures of characters which appeared in the new cartoon, like Count Marzo or such, he would be designed to look like a figure made in 1983. I was too depressed to report this on TR.

As you might recall, I find this fucking insane. I mean, just look at Trap-Jaw up there. Who really wants a well-articulated version of the old version over the awesomely badass, Four Horsemen-designed 2002 version? Again, it’s the new version that could best benefit from increased articulation, sculpting and a better scale (so the big characters are actually appropriately big). Look, just read my original rant here. I promise I’m not the only He-Fan to feel this way (and yes, I’m ashamed to admit I’m a big enough He-Man nerd I might as well used the preferred nomenclature).

Well, apparently Mattel has heard a bit of this fan discontentment regarding their line which is supposedly all about the fans, because He-Man.org is running a poll asking what collectors want regarding the new line?whether they want the old-school figures, the 2002 designs, or even She-Ra or New Adventures figures.

Look, I haven’t asked for much, but I’m outright begging any of you with the slightest interest in He-Man toys to go over to the He-Man.org poll and vote. You don’t even have to vote for more 2002 figures?maybe I’m wrong, but I’m betting most of you want awesome versions of the awesome He-Man toys instead of awesome versions of the old, shittier toys. If enough people vote on this, Mattel will pay attention?they know the fans are the audience here. Please?I need new Jitsu and Spikor figures. It’s the only thing I’m living for.