Damn, this TR Contest thing is the best idea I ever had. Making you all dance to my tune like puppets, writing Daily List-type entries, is the most entertaining thing I’ve done since I ran that puppet dance troupe. I’ve decided to start showing a few of the runners-up, which will win nothing but public admiration and the bitter knowledge a free shirt was almost withing their grasps.

Patrick–Thomas from Kung Fu: “I’m sorry, but anyone who can get taken down by midgets should not be
allowed to claim they are masters of kung fu. That should be a law.”

Adam Epp–Vaan from FFXII: “This leaves one good guy: C-3PO. Yes, C-3PO. Vaan is the C-3PO of Final
Fantasy XII–he’s whiny, has no real plot importance, and he’s shiny.” 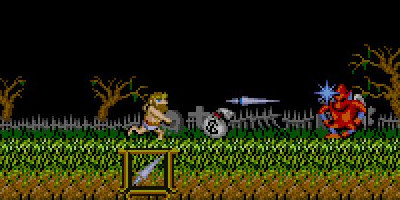 There were other great entries, of course, but I did want t pont those out. Finally, the winner is “Starman Matt Morrison and his entry on Arthur from Ghosts n’ Goblins, and I think you’ll see why:

You can sense Arthur’s incompetence at first sight, as he and his
girlfriend – Princess Prim – are enjoying a picnic date. At night. In a
cemetery. And Arthur is wearing nothing but his boxers. You might be
able to get away with the first three if your girlfriend is a spooky
goth chick (and despite purple hair, Prin ISN’T a spooky goth chick)
but there are few women who will put up with your stripping to your
skives during a meal unless you are Brad Pitt and offering to let her
use your pecs as a plate. And that kind of thing almost certainly won’t
fly with a presumably classy lady like a Princess.

Anyway, Prin is kidnapped by Satan himself, forcing Arthur to put
his on pants and travel into the bowels of Hell to save her. Too bad
for Prin that Arthur is about as skilled in the knightly arts of combat
as he is in the chivalric codes that dictate you not appear before a
princess in your tighty-whiteys and asking if she’d like some sausage
for dinner.

Arthur can’t fight or move. At all. He runs like a wiener dog with a spastic colon.

There’s more, but if Matt hadn’t had me at Arthur’s picnic nudity, he certainly had me at “spastic colon.” Thanks to all of you who entered, and shed no tears–I have several more shirts to give away, and a new contest on this Friday.