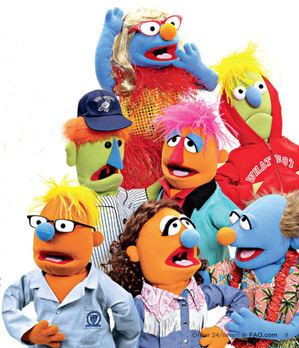 FAO Schwartz recently came out with a Muppet Whatnot Workshop, where you can customize and build your very own Muppet. From the overwhelming response they’ve been getting for orders, it appears to be very popular–and why wouldn’t it be? While on the surface the idea of making your own Muppet to play around with is very cool, there are some downsides to consider. Of course, we’re sure you’d use your Muppet in a responsible way, not everyone is so trustworthy, and alas, a few perverted bad eggs can spoil anything good for just about everybody. We highly recommend you read this stern warning about the 8  terrible and yet sadly inevitable consequences of the Muppet Whatnot Workshop before heading down to FAO yourself.

If it isn’t bad enough that people get on YouTube and make a video of themselves talking about what they think is interesting, now, we’ll have a felt-covered hand of that person talking about what they think is interesting. Ah, the sheer entertainment of someone with the screen name of Billynutz128 describe through the use of a horn-rimmed glassed, frizzy-haired, hoodie-wearing Muppet how the new X-Men movie is going to blow and how they would make it better. They will also point out how awesome their Muppet is and how they think their design captures their likeness exactly. Then they will talk about how the name Halo: ODST is a terrible name for a Halo add-on game and a list of better names. Then they will talk about how awesome their Muppet is. Then you will wonder if it’s sadder to watch this or watch five hours of Ernie slowly dying of cancer while Bert cries.

It’s bad enough to see a fat person dressed in a poorly made Mario costume walking through a convention floor, but just imagine him accompanied by a Muppet Luigi. The man in the Mario costume talks with a horrible Italian accent, “It’s-a me! Mario!” and then he makes his Muppet Luigi say “And it’s-a me! Luigi!” You turn to avoid the horror of the puppet mouth moving awkwardly, its insides stained brown from months of never being cleaned, smelling like pizza and sewage, only to run into another fat man dressed as Ash, and a Muppet that faintly resembles Pikachu; the amount of liquor needed to tolerate a convention rises substantially. 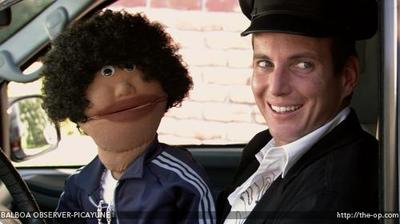 Some of us will have the terrible, horrible misfortune to know someone who will carry around a Muppet likeness of themselves to all places at all times. It’s a novelty at first, like chicken pox, but it quickly gets horrible as you watch them take their Muppet to dinner and ordering food for them, taking their Muppet to the movies and having it talk back at the film, dressing the Muppet in black and attending funerals. It will get to the point where even the angry shouting at the friend will not get them to stop and the only solution is to chuck the Muppet into an industrial strength chipper-shredder, followed by the person in question.

The message of Jesus told to you through people arriving at your door with Muppets and a pamphlet. It’s all about how Americans love to use anything, no matter how ridiculous it may seem, to get you to love Jesus. What better display of the awesome power of God than to have felt sing you hymnals? In fact, wouldn’t the sermon of Jesus on the mount been a lot more effective with a Muppet on his hand? No doubt he would have looked even more wise and more respectable and not at all like a damned lunatic. Oh, not at all! Nor will any non-Messiah will be considered to be a complete and utter lunatic for holding a Muppet and singing “Oh Come All Ye Faithful,” especially if that Muppet is nailed to a cross. Oh don’t think it won’t happen.

You are walking along a convention hallway, when you are confronted by a Gangrel Vampire Muppet. He asks to feed on you, and before you can say “What the hell?” A Ventrue Muppet appears to fight the Gangrel Muppet for feeding rights. A game of paper-rock scissors ensues, but nobody can seem to win as they can’t seem to figure out who is doing what as the hands are hard to manipulate. A blue Muppet walks in, introduces himself as a Werewolf arbiter and tries to settle the dispute between the two. It is decided that paper-rock scissors isn’t the best way to decide the outcome, and that instead, rolling the highest number on a ten-sided die is the best way to decide the winner, but the Muppets have to roll the dice themselves. While the issue of how a Muppet can hold a die in their hand not resolved at all, you quietly slip away to the front desk, check out of the hotel and drive as fast as possible in any given direction.

2) Rise of Puppets in Comedy

Famed puppeteer/comedian Jeff Dunham may make you laugh, in which case you should shoot yourself in the face. Then you will have to shoot yourself in the face for every new unfunny person who will show up to every open mic night with a Muppet in hand, doing bad ventriloquism and delightfully racist characters, like Linguini, the Italian Pizza Cook, Chinky the Convenience Store Owner and Barack Obama “the Terrorist.” Clearly then, the only solution will be to arrive armed to every Chuckleluck’s and Laff Bucket comedy bar across the country, with the sweet song of the shotgun and the flying of orange cloth and blood signifying the beginning of the end.

Every time you see someone with a Muppet who doesn’t know how to make the lips match the words, the hands on rods move properly, or how to not to make jokes about how women should stay in the kitchen, surely you will think of Jim Henson and feel a sadness; the sadness over the loss of Jim Henson and his talent, his genius and his heart. Then, focusing that sadness , the earth above Jim Henson’s grave will ripple and Jim Henson will rise again as the wrathful undead, with a thousand arms, each controlling a Muppet with exacting precision and wit. He will then find everyone who has used a Muppet in vain and show them exactly how good Muppetry can be and how empty their lives are. Those people will then kill themselves, and the undead Henson will use their skin to make more Muppets to continue his reign of justice. Or, you will just feel really sad.