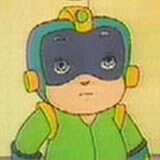 Actions speak louder than words – especially in the case of video game heroes. Tight-lipped characters allow gamers an immersive experience where imagination abounds. Players can concentrate on external character development and don’t have to get hung up on audible baggage that could get in the way of things like killing giant spiders or collecting rings. That’s why, when it comes to adapting a mute video game star into a kid-friendly cartoon, silence is golden. Poorly conceived cartoon voice actor choices have transformed many a noble video game hero into animated turds. Read on to see how these eight animated atrocities set back suspended disbelief for decades.

8) Everyone from Saturday Supercade

Premiering in 1983, this cartoon variety show gets points for its pioneering spirit. Sadly, it only pioneered crap. Animating licensed video game characters was a new frontier and this show only served as a template for worse shows to come. It starred a Frogger character who worked as an ace reporter, a Greaser Q*Bert and goofy Donkey Kong (whose short features Mario’s first animated appearance in the US). Each show featured lame characterization; ruining stars by making them utter nonsense in presumably kid-friendly tones. The worst perpetrator remains Donkey Kong Jr., who spouted perhaps the lamest battle cry of any cartoon character of that era: “Monkey Muscle!” In a time where midi sounds filled video games, this show’s voice acting managed to come up short to 8-bit beeps and chirps.

It’s hard to screw up a friendly rideable dinosaur that can devour enemies, breathe fire and sometimes fly, but that’s just what DIC did with Yoshi in the Super Mario World animated series. Rather than let Yoshi’s greatness resonate through facial expressions and body language, DiC decided to make the lovable dinosaur a manic and mentally frustrated boychild who spoke high-pitched gibberish. The only reason he’s not higher on this list is because Mario and Luigi’s adorable Italian stereotyping hugely overshadows his episodic annoyance.

There’s a lot of pubescent power fantasy appeal behind the plot of the Double Dragon video game. Two brothers run around punching the crap out of people to save a girlfriend from a villain. Why, it’s virtually a PG-13 rated Super Mario Bros! So color a lot of fans surprised (and enraged) when the US DD cartoon features two full-out wusses with voices to match. This cartoon could have been great. Just imagine: 22 episodes of two sleeveless brutes silently beating armies of confused gangs with their own weapons. Instead it relied on hokey mysticism and generic one-liners.

5) King Dedede from Kirby: Right Back at Ya!

It’s ironic that the same accent that helped make Colonel Sanders so popular helped completely ruin a cute, evil penguin for each and every Kirby fan.  Or it would be, if most people didn’t secretly hate KFC’s spokesman. In a way, it’s kind of fitting to hear an accent born of oppression used to portray an evil tyrant who buys monsters to destroy a pink ball. On the other hand, King Dedede speaks so often that watching an episode of Kirby leaves viewers craving a bucket of the Colonel’s original recipe. That’s good for the chicken industry, but terrible for everyone else.

When a show abandons fun stories in favor of lame musical numbers, it’s really no wonder the voice acting completely misses a proper portrayal of DK and his sidekick. Donkey Kong has been many things over the years: a villain, a hero, a racecar driver, but never a frat boy. Diddy fares even worse, with a voice akin to a Disney villain’s henchman. Watching this show will drive any DK Country fan…bananas!

Forget that his croaky, chain-smoker intonation and penchant for adding the adjective “mega” into every sentence is mega-insane. The fact that this version of Mega Man is based off of America’s NES box art is a near-unforgivable affront to the Blue Bomber’s legacy of greatness. Fortunately, Mega Man’s side-kick status on the otherwise enjoyable Captain N: The Game Master makes him unrecognizable enough that he’d be able to shine a decade later in his own (pretty rad) series.

2) Link from The Legend of Zelda and Captain N: The Game Master

As one of the noblest Nintendo characters, the stoic Link (who is even nice enough to let players assign him a name of their choice) has historically been given the animated shaft. It’s not that The Legend of Zelda animated series isn’t without its charms. There’s a part of all of us that enjoys Link’s humanizing rudeness. Sadly, nowhere in the animated series’ 13 episodes does Link really show himself to be the badass he truly is. Instead, Link hams around with a piece of tri-force the size of a grilled cheese sandwich while trying to get in the Princess’ pants. Nobody’s saying that’s awful, it’s just not a very accurate representation of the video game…yet. Keep those letters to Nintendo coming!

Even though Sonic gained a videogame voice in 1998’s Sonic Adventure, prior to that he had
been a silent sentry of speed. Then came the bleak September morning when one of the world’s most recognizable video game characters would be rendered lame. In an apparent effort to rob children of their collective cartoon innocence, DiC unveiled none other than Urkel himself as the voice of Sonic in not one, but two simultaneously running animated series and a third rock and roll themed travesty down the road. Viewers can forgive White for his nasal tone – he was all the rage on Family Matters, wasn’t he? DiC probably did the best it could as well. The blame has to fall on a jaded viewing public, who after years of shitty video game cartoons, was just too weary to care. But, it’s okay, now there’s Sonic X and a bevy of video game sequels that are splendidly Urkel-free.