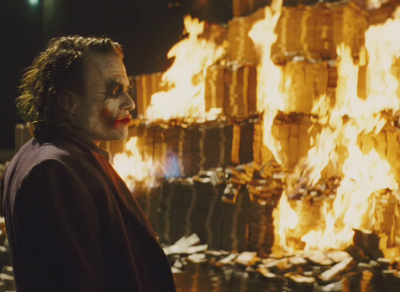 Big sis Nikke Finke of Deadline Hollywood Daily reports that Christmas has come early for Warner Bros. The Dark Knight sold 600,000 Blu-ray copies on Tuesday–yes, in just one day. Compare this to the previous #1 Blu-ray seller, Iron Man, which sold 400,000 in a week.  So that’s pretty impressive, until you hear about how many regular Dark Knight Blu-ray discs and DVDs were sold altogether…3 million. Admittedly, that’s counting the US, UK and Canada, but that’s still not bad–big sis says The Dark Knight should be the best-selling DVD of 2008 in less than a week.

So assuming everything sold at $20 a pop–which is a decent estimate,I think–that’s $60 million, earned in one day. In other news, I treated myself to real Diet Dr. Pepper instead of the grocery off-brand this week. Whee!