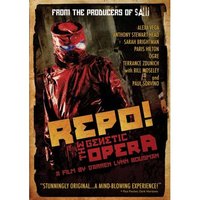 ? Repo: The Genetic Opera
I’m told this horror/rock opera is quite good and funny, but it does have a role played by Paris Hilton, and thus I won’t watch it. I refuse to reward people who further Hilton’s dubious claim to fame.

? City of Ember
Bill Murray is mayor of an underground city in this oddly dark kid’s SF/fantasy movie. The 12 people who saw it said it was all right.

? Max Payne
Meanwhile, everyone who saw Max Payne said it was a huge steaming pile of shit, even by the lax standards of movies based on first-person shooter games. Why do people keep hiring Mark Wahlberg as the lead? he needs to stay supporting actor, like in The Departed.

? The Powerpuff Girls: The Complete Series
An awesome show for young and old, and infinitely clever. Please don’t let last week’s horrible Fan Fiction Friday keep you from buying this.

? One Piece Season One, Third Voyage
Happily, this One Piece collection–likely the best episodes in the whole series, in my insane One Piece fanboy opinion–is the highest-selling anime DVD of the week. Admittedly, that still puts it behind some direct-to-DVD Center Stage sequel, but it’s better than nothing.