There’s no disputing KISS has a place in rock n’ roll history–whether you like them or not,  their iconic looks, catchy hooks and bubblegum lyrics have made them superstars for decades. However, they have squandered all of their rock credit by merchandising themselves to the point of self-parody, and about eight miles past. Frankly, KISS is no longer a band but a brand – it has made over half a billion dollars in merchandise alone, and there have been over 2500 KISS-themed items of merchandise since the band debuted in 1972 – if anything, the band has redefined what it means to “sell out.” There has been virtually no item considered too terrible, too lame, too stupid to be rejected to bear the KISS logo–and somehow, thanks to some magic element, there are still fans who buy all this pile of shit. And here are the 10 most egregious examples from a large, large pile.

It’s hard to believe that any mother’s hopes for their children include them growing up, lugging Gene Simmons’ luggage, and getting chlamydia from a leftover groupie, and yet, that’s exactly what this article of infant clothing proclaims. If there’s a more efficient way of letting a child know that you expect him to be trash, we’re not sure what it might be (maybe a crib made out of Milwaukee’s Best beer cans. Maybe). However, on the plus side, with those kind of lowered expectations this kid will be hard-pressed to disappoint his parents. At least there’s no “Future KISS Groupie” onesie. 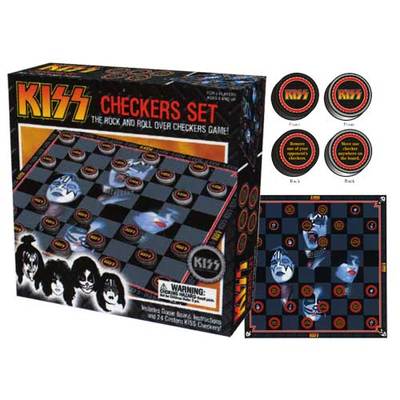 Many times, rock bands can often attach their name to something and make it a little cooler–musical instruments, items of clothing, and so on. But Jimi Hendrix would probably have trouble making a boardgame cool, and Satan himself could not make the game of checkers rock. Checkers might be the least rocking activity on Earth, and yet here KISS is, with a checkers set. Hell, Chutes and Ladders would be less shameful. 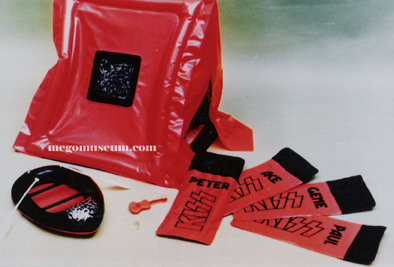 In the ’70s, nobody kicked ass in the action figure department more than Mego. They made KISS figures, and that was actually pretty cool as the band was still making music. You’d think the first playset Mego would make for Gene and the gang would be some kind of stage, right? Wrong. Mego decided the band would first go camping–excuse us, “kamping”–and conceived this lovely little tent amd matching sleeping bags for the boys. Why they did this is unknown. Buyers didn’t think much of the concept and the toy was never produced which means kids couldn’t have Paul roasting weenies while Gene breaths fire. 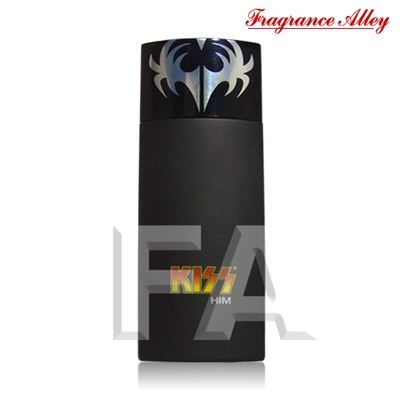 When it comes to celebrity cologne, there is one important question: “Do I really want to smell like this celebrity?” The answer should almost always be “no,” except for William Shatner, who we’re told smells like gingerbread. Certainly, no one in his or her right mind would ever voluntarily smell like Gene Simmons–probably not even Gene Simmons. There ‘s little doubt he smells like sweat and hair gel and body odor and gonorrhea. Slapping on the KISS cologne each morning should be followed by a long soulful look in the mirror and weeping. Then a long bath. 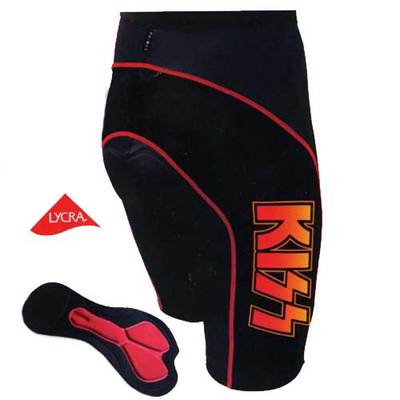 Oh, indeed. Bicycle shorts are already hilariously awful, and like all forms of physical exercise except for crazy monkey sex, cycling is not rocking. A KISS bike would be silly on its own, but a pair of bike shorts bearing the Ace Frehley-designed KISS logo on the ass is so, so much worse. We suppose there’s something of the KISS spirit in a garment designed to reveal all the contours of male genitalia, but we’re equally sure the spirit includes making it look bigger, not compacting it as close to your body as possible. 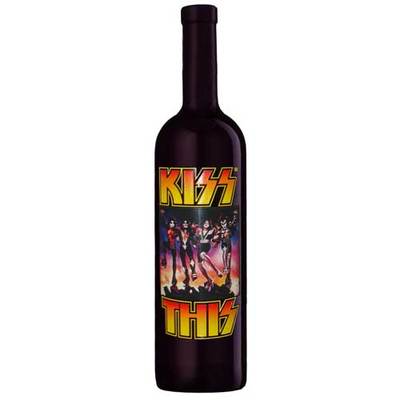 Alcohol abuse is one of the staples of rock n’ roll. Generally, it’s cooler to drink liquor all night and hope you don’t choke to death on your own vomit, but guzzling a case of beer also reasonably rocks. Hell, it’s even cool to drink wine, as long as you drink a ton of it, preferably straight from the bottle. Unfortunately, making wine? Not so rocking. It takes a very long time to make. And even when you’ve made it it, you have to wait several years before you drink it. We guess since even random folks like Francis Ford Coppola have their own wineyards, it’s not super surprising that KISS has their own winery, but it certainly seems contradictory to the rock mystique of the band. It’s not even worth discussing if the wine is of any quality, of course–it’s meant to be bought and immediately put away by collectors, never opened. We’re betting it’s the same stuff that’s inside the KISS cologne bottles.

Given how many shots of penicillin the four members of KISS have surely needed over the years, KISS condoms just seems like cruel irony. But if KISS has suddenly decided to start promoting safe sex, then they have whatever punishment fate can dole out coming to them. If you’re honestly slapping a piece of KISS merchandise on your penis, you need an intervention. And if you ever manage to get laid with one on, you also deserve an award.

The shirts may read “Shout it out loud” but what it really says is “The fact my vote counts as much as other people’s proves the system is irretrievably broken.” Also: “After I vote I will likely blow bong hits int
o my cat’s face.” 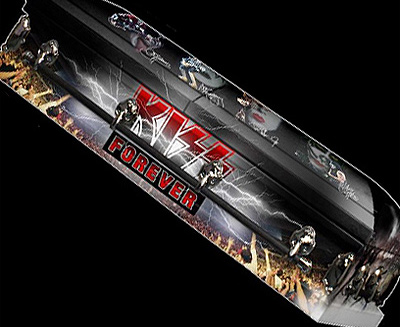 Let’s set aside the fact that the coffin looks like a KISS-themed Hot Wheels car minus the tires. Do you really feel your love of KISS needs to be proclaimed beyond the grave? Do you think the worms who come across the coffin will see it, make little devil horns, and eat some less rocking corpse? No matter what good deeds or amazing feats you might perform in life, you buy this thing, and you’ll never be remembered as anything but the “jackass with the KISS coffin.” You also won’t get into heaven, because you’ll be needed as one of the torments of hell.