Picking that one action figure that was small enough to smuggle into school in your pocket but sure to keep you entertained during math class was no easy feat. But Micro playsets made the choice much easier, taking all the fun of much larger toys and shrinking it down into amazing, compact form. You don’t really see micro toys anymore, due to the fear that they will eradicate toddlers around the world. But you can’t choke on a memory. Here are ten examples of the most fun you could have in your pocket.

Ever wanted to carry a whole planet in your hands and command its inhabitants into galactic battles? Who hasn’t, really? War Planets allowed kids to do just that. Each planet had a basic design theme and name (Bone, Fire, Ice, Tek [shown above]etc.) and had a large assortment of alien critters, ships and weapons tucked inside. A short-lived CGI cartoon series, Shadow Raiders, was based on the toyline. 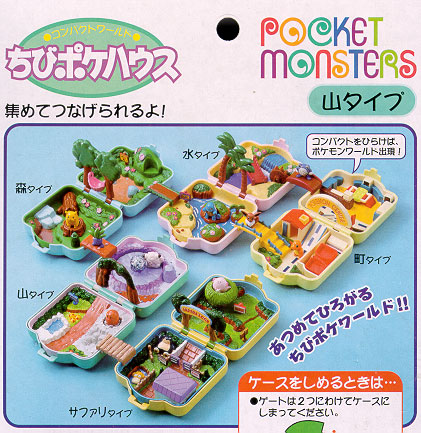 I don’t even know if these were available in the States, but these colorful Japanese sets were worth importing. Pok?mon battled in very detailed, cartoon-ish landscapes that connected together and folded up into easy-to-carry cases.

8) Happy Ness: The Secret of the Loch

As important as Polly Pocket was to the micro playset genre, I just couldn’t bear to include her here. But we do have female readers who were into all things cute and pink when they were little, and I had to include one for them. I have no problem listing Happy Ness, a breathtakingly bizarre series of playsets that featured pastel Loch Ness monsters frolicking in girly fantasy landscapes that folded up into charms emblazened with Nessie holograms. I’d find and buy some of these if I wasn’t afraid that my balls would drop off. Oh, and know what the advertised Secret of the Loch is? Nessie is a fruitcake. 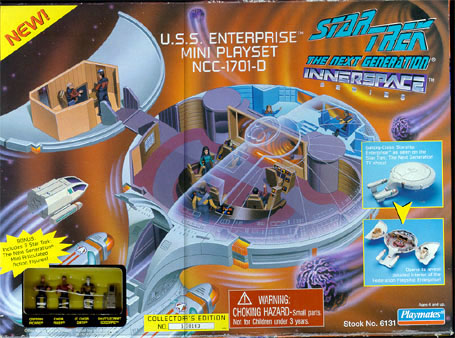 No, this toyline from Playmates did not feature Captain Picard and Data joining Dennis Quaid on a harrowing journey through Martin Short’s innards. But it did offer miniature versions of various Star Trek ships that opened to allow play with tiny crewmembers within, and Star Trek props like tricorders and phasers that unfolded into rooms from the Enterprise like the sickbay and transporter and an alien planet. The best was likely the Enterprise-D, which opened to reveal the bridge, Picard’s office and even Ten-Forward so your mini-Starfleet crew could get sloshed! (Wait, what’s this Synthehol crap?!)

These toys still exist, but at a bigger scale than the originals, which are the ones we’re honoring here. The Mini-Mutants toys included micro versions of the TMNT action figures, who came with highly-detailed playsets that ranged from staple locations like the Turtles’ sewer lair and the Technodrome to crazier adventure locales like a medieval castle, a TMNT football game and the Michaelangelo Space Station, which featured the Turtles decked out in adorable, bulky spacesuits.

Micro Machines were the coolest little toys cars of all time, and the introduction of Travel City gave them a place to drive around that wasn’t the surface of your cat. Each set came in a simple gray box that could fit without a problem into your bookbag. Inside each box were the parts to put together such sets as a police station, motel, toll bridge and other city staples. And the sets could be locked together into a customizable city, which is why Travel City beats out the other, bigger Micro Machine playsets. 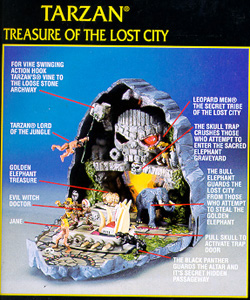 Trendmasters made regular action figures that were of questionable quality, but where they really shined was with their micro playsets. Tarzan: The Epic Adventures seems to have been some desperate attempt to cash in on the success of popular Kevin Sorbo adventure show Hercules: The Legendary Journeys. Unlike the larger action figures, the micro sets place classic Tarzan in archetypical situations, such as battling foes in a lost city and at the Earth’s core. He even went to Mars to battle John friggin’ Carter! These sets were amazingly detailed, included all kinds of cool action features, and had lengthy product descriptions that proved Trendmasters’ copywriter was really passionate and working overtime. Definitely pick these up if you can find them, especially Treasure of the Lost City. It includes a scantily-clad Jane, Leopard Men, an elephant guarding an elephant graveyard, and a giant skull-shaped temple trap.

Mighty Max was arguably the initiator of the “toy that unfolds into a micro playset” trend that was prominent in the 1990s. Max was a reluctantly adventurous kid who was transported into the Horror Zone by his magical baseball cap. There, he found himself having to combat all sorts of monsters, and these battles were depicted in the form of many kick-ass micro playsets. What was cool about the Mighty Max line was that it included sets at different sizes and price points, allowing one to affordably customize their travel-play experience.

Giant monster mayhem could be re-enacted with this awesome collection of Godzilla sets, each palm-sized and shaped like the big green lizard’s head. Opening Godzilla’s jaw would reveal one of several famous cities and a pair of teeny tiny, destructive monsters to wre
ck them. With these sets from Trendmasters, you could have Godzilla combat Rodan, Mechagodzilla, King Ghidora, Space Godzilla or Biollante in, respectively, New York, L.A., San Francisco, Tokyo or Washington, D.C., to name a few. These awesome playsets really captured the feel of the Godzilla movies, including several buildings and other structures that could be set up and then toppled in two by the monsters.

The original Star Wars micro toys failed to meet the success of their larger counterparts, but they did something the bigger toyline could not — they allowed you to collect playsets that could be combined to form expansive and detailed recreations of settings from the films. Playsets of the Death Star, Cloud City and Hoth allowed you play out many of the action scenes from Star Wars and The Empire Strikes Back. The tiny die-cast figures were super cool, came in different poses, and could be placed in small versions of the famous vehicles from the films. Galoob would later revive this idea and scale in their Micro Machines line. Many of those sets were more detailed than Kenner’s versions from years before, but some unfortunately transformed into the disembodied heads of Darth Vader, Boba Fett and the like.