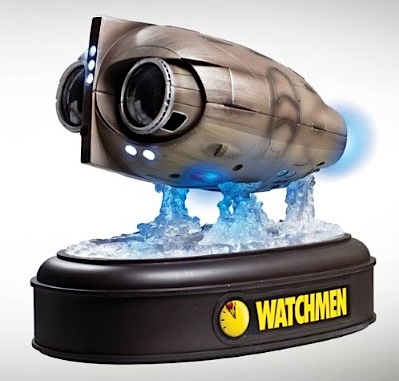 ? Amazon’s going to have an exclusive collector’s edition of the Watchmen movie which will include the Owlship seen above. Right now it’s $84 for pre-order on Amazon, but it’s still the Director’s Cut Special Edition, not the rumored longer cut with Black Freighter or anything. (Via BluRay Blog)

? TV Shows on DVD says there’s going to be a complete Futurama collection inside a Bender’s head package. It’ll includes all four seasons and the four DVD movies, and I’d expect te head to be fully 3-D and not like those Simpsons packages. No pics yet.

? The Blu-Ray Blog also reports that the super complete Battlestar Galactica complete series box set won’t be so… er, complete. It’ll actually be missing the “Face of the Enemy” webisodes which were on early DVD releases. Apparently, these were the episodes where Gaeta came out as gay, which is causing quite a kerfluffle. It’s hard to imagine that anyone would be stupid enough to cut the “gay” webisodes in this day in age, no matter how he/she felt about them, so here’s hoping it’s just some kind of a mistake.