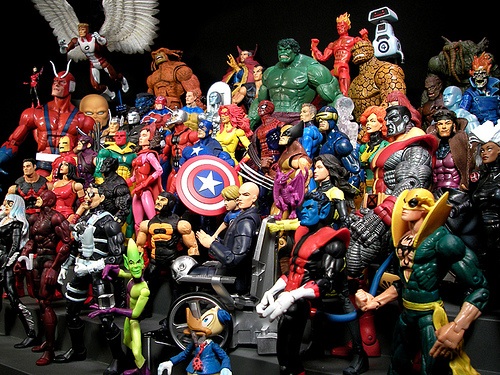 Here’s some good news I wasn’t expecting: Marvel Legends, the awesome toyline from Toy Biz that got bought by Hasbro, who made some terrible figures but then made a few good figures but almost immediately seemed to cancel the line — okay, this got away from me a little bit — but Marvel’s main toy guy Jesse Falcon apparently told folks at Wizard World Philadelphia that Hasbro would be showing off 16-18 new Marvel Legends figures at San Diego Comic Con! This includes an X-Force Warpath, Madrox the Multiple Man, Lady Bullseye, anew Deadpool and a new Inhuman, and a bunch of two-packs, none of which will be retailer exclusive. Whee!

I have no problem with Hasbro’s 3 3/4-inch Marvel Universe line, but I’ve been collecting my peculiar roster of Avengers in Legends for years — I wasn’t about to start over in a new, smaller scale, and I know a lot of collectors feel the same. So the news that there’s more to come –although I don’t have the faintest clue who I’d personally want (except a Dr. Druid figure that I could beat with hammers) — is very cool. Check out a few more details at Marvelous News, and let me know who’s missing from the Legends line in the comments. It’s a really slow day and I’m bored. The photo comes from Carls Life, FYI.