By Rob Bricken and Brian Heiler 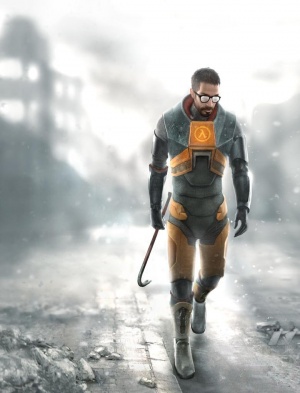 Scientist?
Check. Thick, non-trendy  glasses? Check. Crippling social anxiety that
renders him utterly unable to speak to others? Check. Sure, he might
know his way around a crowbar, but there’s no way Mr. Freeman doesn’t
have an old X-files poster somewhere in his research laboratory.

Originally
just
a one-shot character, the booksmart but otherwise horrible Urkel was a
smash hit for ABC’s TGIF series and
eventually became its most popular character. For a period in the ’90s,
America could not get enough of the tuba playing, cheese (and scenery)
eating, bespectacled nerdling. So much so, that Urkel is as indicative
of the 1990s as
flannel shirts and Pauly Shore, two other things we hope never return
to the public consciousness.

8) Lewis from Revenge of the Nerds

Lewis and his partner Gilbert put nerdkind on the map in their 1984 feature Revenge of the Nerds;
what puts Lewis apart from his geeky comrades is his “unique” laugh and
incredible drive to
be accepted as a “norm,” as evidenced by Lewis’ refusal to settle for a
nerdy chick  and break himself off a piece of Pi cheerleader
(although the way he did it is likely considered rape). Lewis is truly
a
nerd to remember.

This
cartoon scientist was as smart as he was short, and he was ludicrously
short. Although he was able to build virtually any device — not the
least of which was his massive lab, hidden underneath his parents’
suburban home — he was frequently defeated by his own reach and his
idiotic sister Deedee. Best of all, he spoke with an accent as thick as
his glasses, which none of his other family members had.

6) Data from The Goonies

The
Goonies were not particularly cool, but they were certainly awesome —
and none were more awesome than the group’s nerdiest member, Data. Kids
didn’t want to be the Sean Astins or Corey Feldmans or Chunks; they
wanted to be Data, because he was the kid who knew how to make a belt
that shot a goddamn suction cup. Where would the Goonies be without
Data? They’d be floating corpses in Pirate’s Cover, that’s where.

Comic
creator Evan Dorkin has truly captured the dark side of fandom with
this group, a smelly zit encrusted cadre, who while they share similar
interests, ultimately view each other as competition. These unpopular
dorks would step over each other’s mothers for the last Spawn
variant cover on the shelf. If you’ve ever been to a con or perhaps
worn Vulcan ears, you’ll be able to relate to somewhat these
characters, as they are always present in the deepest recesses of your
soul. Which will either make you laugh or feel suicidal; it’s really up
to you.

4) Sheldon from The Big Bang Theory

This
child prodigy started college at 11, graduated at 14, got his doctorate
at 16, and it utterly, unapologetically, a nerd. He has built death
rays, reconciled the black hole information paradox, and added Spock
and Lizard to Paper-Rock-Scissors. He has no social niceties and does
not care, with the possible exception of his hot neighbor Penny. Truly,
he is a nerd’s nerd, and would be the first to tell you so… after he
reminds you how much smarter he is than you. 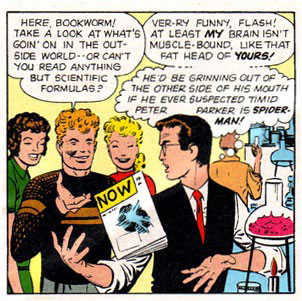 Sure,
Clark Kent is a dweeb, but underneath his awkward exterior that is the world’s most
powerful human being. When Spider-Man goes home, he gets to be Peter
Parker, a shy loner who talks entirely too much to himself and despite being a scientific whiz kid, doesn’t
seem to be able to figure out how to make having freaking super powers
work in his favor. At present, Marvel still has him living with
his elderly aunt, exponentially increasing his nerdiness.

2) Comic Book Guy from The Simpsons 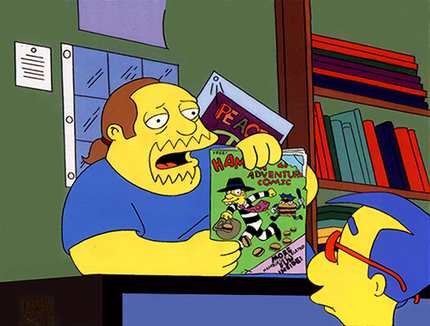 The Simpsons‘
Jeff
Albertson, a.k.a. Comic Book Guy, is such a popular character
mostly because there’s a Jeff Albertson in every town in America. One
only has to visit a convention dealer’s room to see a surly behemoth
letting his misanthropy get in the way of what ironically is a
frivolous entertianment. CBG is also a renaissance nerd,
as he can pontificate about baseball cards as well as he can discuss
Dungeons &
Dragons, and do both speaking Klingonese — although 99% of his
conversation will be about how these things suck and used to be much,
much better. Truly, he is a nerd for all
seasons.

1) Willow from Buffy the Vampire Slayer 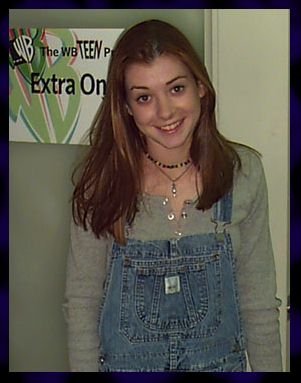 Pay
no attention to immensely powered witch who hooked up with the ladies
and occasionally flayed bastards alive — underneath that person is
Willow Rosenberg, the gawky, overall-wearing computer genius who was
overjoyed to be befriended by a cool kid like Buffy and longed for
smart aleck Xander. Eternally made fun of by Cordelia and the other
cheerleaders, young Willow would use her smarts to research news and
demons on the burgeoning World Wide Web, which was a mystery to even
Giles (he preferred his books). It was that nerdiness that in fact led
her to research magic and become the magical badass she ended up at the
end of the series. The lesbianess? That appears to be Oz/Seth Green’s
fault.