Menu
Home
>
Cartoons
>
The 8 Redeeming Qualities of the Gobots

The Gobots are usually considered a joke among anyone who actually recalls them. While many children bought the toys and soaked up the syndicated cartoon in the 1980s, current nostalgia for the Gobots remains fairly low, around the levels of Blinkins or Potato Head Kids. At best, Gobots are remembered as the dumber, duller cousin of Transformers. Yes, Gobots are seen as childish and silly next to a cartoon-and-toy property that brought us robot dinosaurs dancing to “Weird Al” Yankovic’s “Dare to be Stupid.”

Perhaps we’re all just a bit too quick to judge. It’s true that Gobots, as a toy and TV show, produced mostly mediocrity. It’s also true that Scooter may be the most annoying character Frank Welker has ever voiced (and that’s saying a lot). Yet, even the brief life of Gobots has value in its own barely noteworthy way.

In the 1980s, many an astute child came to realize that the best, biggest, most expensive toys came in boxes, while small action figures, rubber ponies, and other cheaper, less impressive trinkets were relegated to cards and dangled from pegs. Far too many robot toys were of the boxed and pricey variety, putting most Voltrons, Robotix sets, and early Transformers lying well beyond the realm of a kid’s weekly allowance. 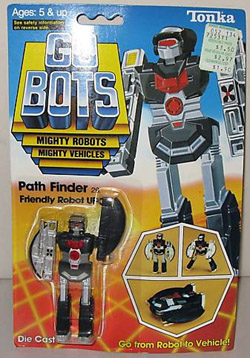 ?
The Gobots line, however, was dominated by little metal machines that cost a few bucks each. Sure, their joints wore out after a dozen transformations, but it wasn’t hard to build an army of Gobots, overwhelming your few Transformers by sheer numbers. The marketers behind Transformers eventually got wise and introduced more cheap, carded robots, but Gobots was, for a short time, the robot of choice for the budget-conscious kid who didn’t want to settle for bootleg anime plastic from a dollar store.

7) The Gobots Opening Doesn’t Screw Around

There are two types of ’80s cartoon introduction. One type piles guitar screams and pop rhythms on top of lyrics that are far too excited about M.A.S.K. or Bravestarr. Then there are the openings that go straight for the throat.

Gobots spends no bland verse in setting up a conflict between peaceful Guardians and destructive Renegades. It’s just a pounding theme interrupted only by the name of THE GO-BOTS! THE GO-BOTS! It’s also over within 45 seconds, barely giving viewers time to notice that the blond human kid is essentially groping Scooter’s crotch in vehicle mode. Gobots were, on the whole, quite forgettable, but many a kid would remember THE GO-BOTS! THE GO-BOTS!

6) The Gobots Were Completely Insane in Japan

Just as Transformers drew from Diaclone and a few other toy lines, Gobots borrowed from similar Japanese sources. Some robots based on anime such as Mospeada and Space Adventurer Cobra filtered into the Gobots line, but most of the toys came from the Bandai-backed Machine Robo series. And while the Japanese version of Transformers integrated the American cartoons, Machine Robo didn’t need the Gobots TV show. It had The Revenge of Cronos.

Running for about 50 total episodes, Machine Robo: The Revenge of Cronos and its spin-offs tell the harrowing story of Rom Stol and his clingy sister Leina as they hang around the apparently vengeful planet Cronos. They’re joined by robots with names like Triple Jim, Blue Jet (who is actually red), and Rod Drill. It’s all a little stranger (and slightly better animated) than the usual toy-shilling ’80s anime, thanks to the mash-up of robotic violence and awkward imagery. It’s bizarre enough when cartoons have robots tied to big metal crosses near a river of magma. It’s even more baffling when they’re clearly recognizable Gobots. The animators of Machine Robo also take shots at more popular robots, like Zeta Gundam‘s signature mecha.

Part of Machine Robo: Revenge of Cronos is available in America, possibly by accident. As the rumor goes, the now-defunct Central Park Media licensed it by mistake and released 15 episodes before giving up on the series. We bet they’d have released all of Machine Robo if it had somehow tied into Transformers.

Transformers fans continue their cries of horror over Michael Bay’s new Transformers film, just as G.I. Joe fans cite the exact moments when The Rise of Cobra destroyed their happy childhood memories of laser battles and cartoon PSAs. In the midst of this nerd wailing and tearing of clothes, Gobots fans can sit back, sign yet another pointless online petition to get Battle of the Rock Lords on DVD, and take comfort that their beloved toys and cartoons will never be turned into exploding racial stereotypes by a director who peaked creatively with a “Got Milk?” commercial.

?
Why will Gobots avoid such a fate? Well, no one really cares that much about them, at least not in the studios and awkward early scripts where ’80s children’s products are refined into annoying modern blockbusters. We’ll see live-action movies based on The Bluffers and Galaxy High before we see Gobots brought to a shambling new mockery of cinematic life by even a lowly C-list director.

Transformers: The Movie entertained kids with spottily animated robot carnage, cheese-metal, and a valuable lesson: heroes can die, especially when their toys exit the market. It was the last of these points that also horrified children. Perhaps it also toughened them up, but there’s something to be said for a frivolous toy-robot animated film that doesn’t force a generation to accept morbid truths years too early. And in the 1980s, the only other major toy-robot film in American theaters was Gobots: Battle of the Rock Lords.

Luckily for fragile young viewers, Battle of the Rock Lords frightened no one. It’s a largely harmless little adventure where Gobots both good and evil head to a planet of rock-people, also helpfully divided into heroes and villains. While you might spot a pumice warrior or two being bloodlessly shattered (or dying offscreen), such violence never involves characters with names, personalities, or more than a few seconds of screen time. No one important dies, everything reverts to a friendly status quo at the end, and the Gobots, just as they did in the cartoon, don’t even use guns. That’s why no one really discusses the movie, beyond people who want to hear Roddy McDowall voicing a robot that turns into a golden nugget (his name, shown the same Gobots innovation that brought us Cy-Kill and Fitor, is Nuggit). Still, some parents must have been relieved when Battle of the Rock Lords left children with no nightmares.

In fact, the only potentially traumatic part of Gobots is the above scene from the syndicated cartoon, and it requires some adult interpretation.

The cartoons of the Reagan Era varied wildly in accepting women into heroic, combat-ready roles. The G.I. Joe cartoon put them front and center, and even the short-lived Robotix and Visionaries introduced some female characters. The Transformers cartoon, however, took many episodes to admit that women existed in any important capacity, and when it did, the female Transformers were all pink and lime-green and stereotypically feminized.

Gobots wasn’t having any of that. The cartoon prominently features women on both sides of its conflict, and none is a pink-hued perpetual victim. Whether by thematic intent or by Tonka’s insistence that the show mirror the toys as closely as possible, Guardians like the spaceship-robot Pathfinder and the pickup-robot Small Foot look as sensibly designed as Gobots could get. They’re also shown as the equals of their male comrades, even in the face of puerile hostage-taking villainy.

The most prominent feminist role in Gobots, however, belongs to the villainous Crasher. A transforming sports car, the lipstick-sporting robot serves as one of two lead flunkies accompanying the flamboyant, scenery-gnawing Cy-Kill. The other lackey, Cop-Tur, is a standard dimwit who probably didn’t move any toys. But Crasher is an excitably sadistic evildoer, perhaps the most violent of all the Renegade characters. She even punctuates all of her lines with demonic cackles, showing girls everywhere that they too can be psychopathic thugs if they want to be.

As the less expensive alternative to Transformers, the common Gobot was also far less complex. Transformers started off with basic Bumblebee toys and got steadily more demanding, forcing kids to move all sorts of metal and plastic flanges whenever they wanted to change their newest toy from a fire engine to a robot and back. Yet even the larger Gobots were easily converted in a few steps, and the smaller, carded robots didn’t even need instructions.

Kids could slide a Gobot out of the package, and with a few twists, turn it into a jet or motorcycle or navy helicopter. And when you’re a kid opening up your new treasure in a Toys R Us parking lot, instant gratification is very, very important.

There will always be some debate surrounding such a vital issue, but it’s generally accepted that the Gobots venture beat its more successful rival to the market, if only by a few months. This author even remembers his very young self seeing a Transformers commercial and claiming that it was a rip-off of Gobots. This author learned quickly that rip-offs are sometimes better than their victims.

Gobots were hardly a failure, but an early start ultimately didn’t give them much of an edge. Perhaps they would’ve made more of an impression if their early commercials hadn’t featured such a bored narrator.

However, Gobots were first into the mix of transforming Japanese robots and American branding, so you can’t take that away from them. Well, you can if you point out that American companies were looting Japan’s toy mines for a long time before Gobots came along, and that Tonka probably just got the idea from Mattel’s Shogun Warriors line. But hey, none of those Shogun Warriors turned into a tank or jet, did they? What? Some of them did? Oh. Never mind.