Both G.I. Joe and Cobra are very diverse organizations, allowing in pretty much any species that wants to join their ranks. Sure, it makes sense that the occasional Cobra or Joe would learn to work with a dog or a falcon, but once they started adding various aquatic life and other random animals, things got pretty god-ri-damned-diculous. Each team’s headquarters must have started to look like Noah’s Ark! Still, the inclusion of an animal sidekick with a G.I. Joe figure automatically made that toy 250% more desirable, even if the actual human figure was a waste of plastic. Here are the 17 coolest animal sidekicks in the G.I. Joe: A Real American Hero toyline. 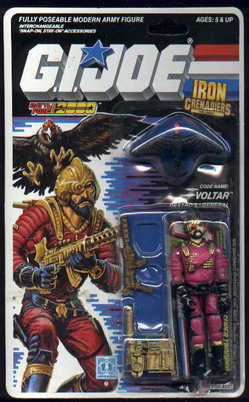 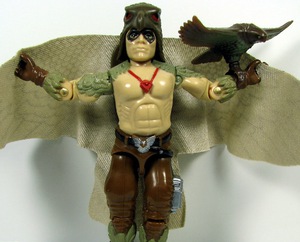 ?
Two Cobra guys in really dumb costumes equals two very embarrassed avian sidekicks. Voltar was a plain old nut who happened to be a good military commander and for some reason liked dressing up in hilarious armor straight out of Buck Rogers and carrying around a condor. Raptor was insane, too, and didn’t even have successes that made up for it. He not only attempted to train an army of falcons to attack G.I. Joe; he loved dressing in the falcons’ image and hanging around in a birdcage. He probably loved pooping on car windshields, too. Oh, and he’s an accountant. These are two clear cases of bird abuse, and that’s just for being forced to be in the presence of these psychos. 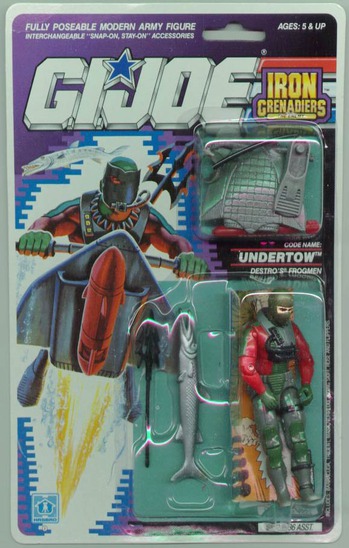 ?
Okay, it’s a nifty accessory. But exactly what function does a barracuda serve in combat? Can you train it to munch on command? Undertow, one of Destro’s frogmen, was probably just a big fan of Heart. 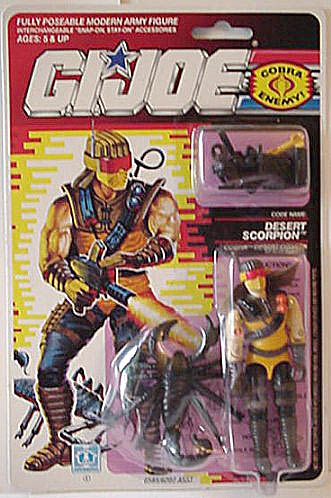 ?
According to G.I. Joe lore, dropouts from the Cobra Viper program had to go sharpen their skills in hot, sandy environments as Desert Scorpions, where the troopers spent a lot of time with their namesakes. But where the hell is the desert these guys were training in? The Mesozoic Era? Those scorpions are HUGE! 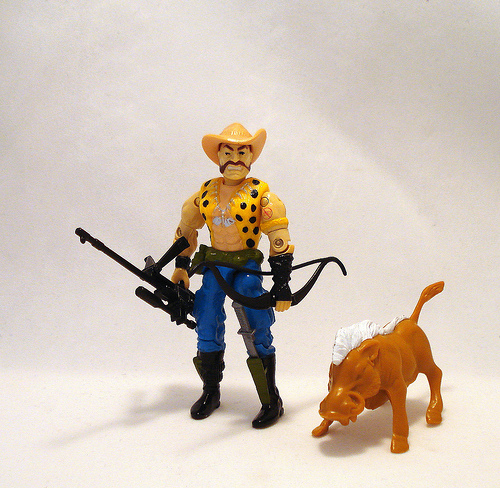 ?
According to the filecard of Gnawgahyde, this Dreadnok poacher likes to grease himself up with rancid hog-fat before going on a hunt, as the horrible scent will mask the chemical additives from processed foods that are in his body and could scare off animals. Translation: The poor boar packaged with Gnawgahyde isn’t long for this Earth, his destiny to become Dreadnok cologne! 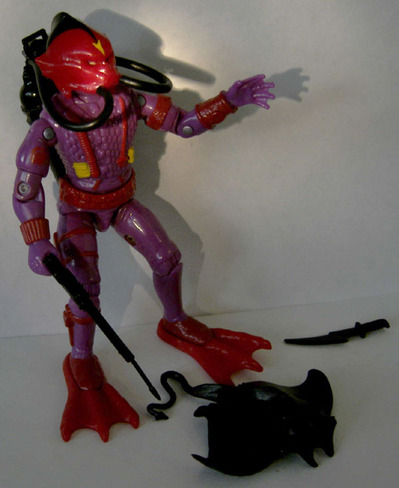 ?
Cobra Hydro-Vipers are apparently all like Aquaman, summoning the beasts of the sea to do their bidding. It’s not clear what exactly these genetically-engineered Cobra troopers use the black mantas for, aside from having them swim curiously around members of the Joe underwater team. 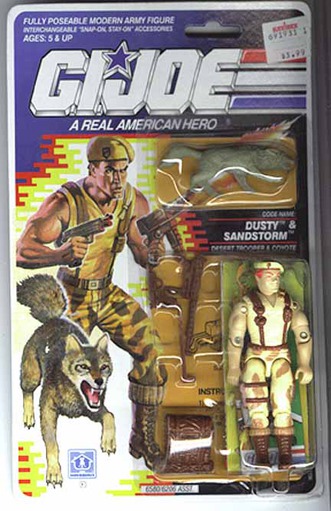 ?
Late in the G.I. Joe toyline, Hasbro decided that established G.I. Joe desert trooper Dusty would get a pet coyote named Sandstorm that shared his proclivity for being a desert survivalist. That’s all well and good, but it’s hard not to picture Sandstorm running off to try and drop an anvil on the Roadrunner. 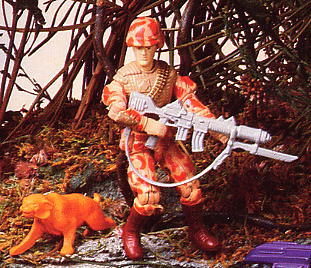 ?
Okay, who here really believes a bobcat can be adequately trained to be of any use whatsoever in G.I. Joe desert operations? Even the filecard pretty much implies that insurance salesman-turned-point man Spearhead brings along his bobcat Max as a mascot. Thankfully, Max was so cute that we were willing to overlook any lack of practicality on his part.

?
While not a living animal, the Cobra Eel’s mechanical shark pal bested any other fish companion, mainly due to its ability to fire a spring-loaded torpedo from its mouth. 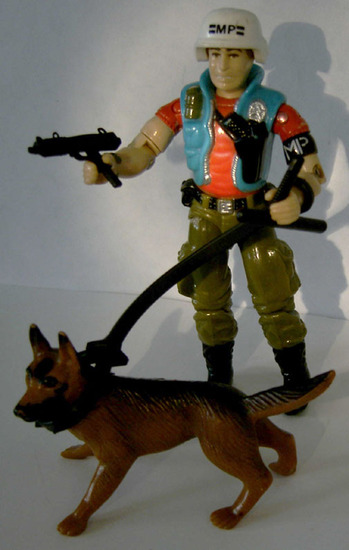 ?
If you were a drunken Joe sneaking back into the PITT after lights out, the attuned senses and loud bark of Order (the German Shepherd belonging to M.P. Law) were sure to alert his master and get your Real American ass thrown in the brig. 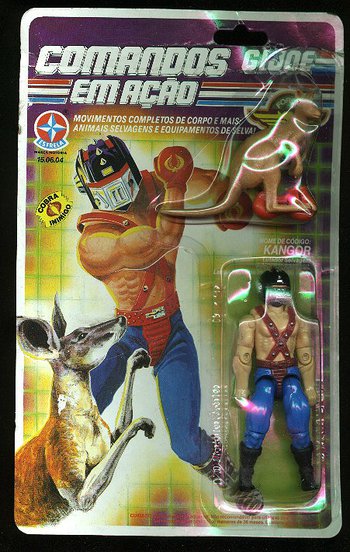 ?
Brazil took the animal sidekick idea even further and introduced a line of exclusive figures called Force Fera. The animals looked suspiciously like the cheap plastic beasts you would get a in a bag of zoo critters at the grocery store, as evidenced by the tiny lion, tiger and bear that the Joes and Cobras were paired with. The most inspired combination, though, was of Cobra boxing instructor Big Boa (called Kangor in this set) with a kangaroo. Even better, the kangaroo was given Big Boa’s boxing gloves! How fantastic is that?! Imagine yourself as a Joe running across the battlefield on Cobra Island and suddenly being confronted with a boxing kangaroo hopping your way. You’d be KO’ed before you could figure out where and when you popped the LSD. 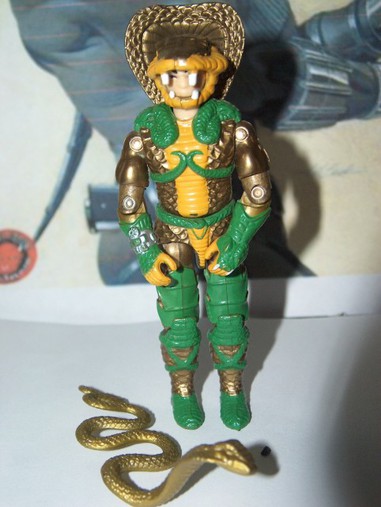 ?
The gold cobra that came with Serpentor was perfect not just as the terrorist organization’s mascot, but as a toy that allowed you to re-enact two key scenes from G.I. Joe: The Movie. The cobra can serve as the snake javelin that Serpentor almost killed Duke with, and can also serve as Cobra Commander in his snake state when he persistently annoyed poor Roadblock by repeating, “Was once a man!”

?
Freedom was the bald eagle teamed with Spirit, the Native American tracker. He was also the living mascot of the Joe team’s American spirit, perfect for those posed, patriotic group shots the Joes liked so much. 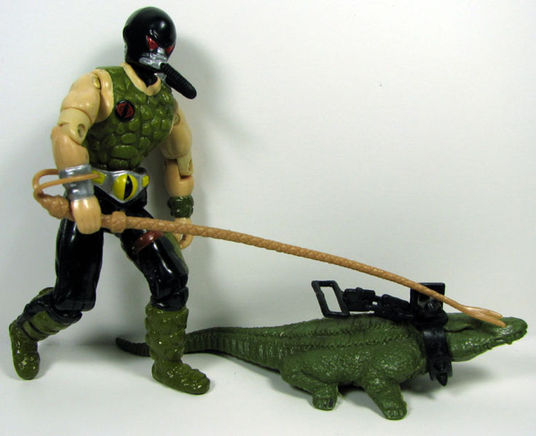 ?
In what is apparently a running joke, every version of Cobra henchman Croc Master comes with a pet alligator. “Alligator Master” doesn’t have the same ring, we suppose. Either way, it’s still a pet alligator on a leash, and that is awesome. 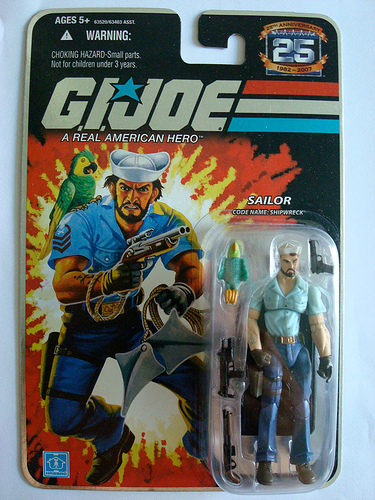 ?
Polly the talking parrot managed to fly a fine line between being annoying and endearing, but he earns a high spot on this list because he was an integral part of the whole package of greatness that was G.I. Joe sailor Shipwreck. Shipwreck’s look and personality seemed patterned after Jack Nicholson in the Last Detail (and he also unfortunately looked like a lost member of the Village People). He was the team’s wiseass and Polly was his foil. Polly even turned a bit creepy during Shipwreck’s extended drug-induced hallucination in “There’s No Place Like Springfield.” 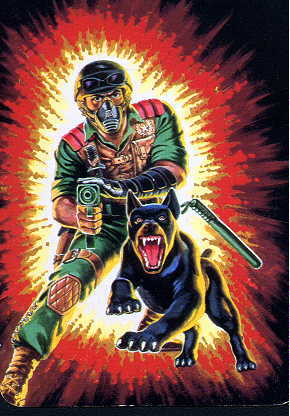 ?
Just for the record, Junkyard was the Joe team’s resident Rottweiler and Mutt was his even more vicious human trainer. They also had the distinction of being the first human/animal pair in the Real American Hero toyline, back in 1984. A fixture of both the cartoon and comics, Junkyard sadly went to Doggie Heaven in the comics due to old age, but his son, Junkyard, Jr., entered the fray with Mutt to take a bite out of Cobra’s butt. And yes, they were probably both doing the biting. 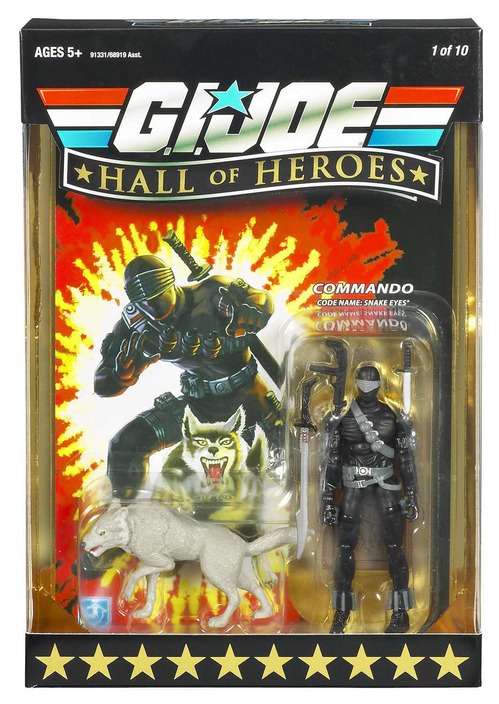 ?
There have been many Snake-Eyes figures over the decades, but the prize gems are the instances when the Joe team’s mute ninja came packaged with his pet wolf, Timber. They are a dynamic pair, one clothed all in jet black and one sporting stark white fur. (Sometimes Timber is painted black, too, and that’s just a shame.) They go together like the two halves of a black and white cookie and rival Constable Fraser and Diefenbaker of Due South for best human/wolf pairing. Timber played a role in Marvel’s G.I. Joe comic book series and died of old age in the Devil’s Due series, but not before siring a litter of little Timbers.