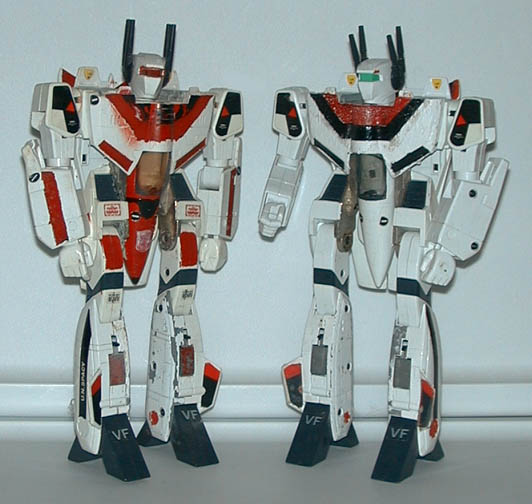 When it comes to action figures, sometimes recycling can be a good thing. Sure, the occasional bootlegged toy makes collectors wonder if there’s justice in the afterlife for pirates who ruin awesome intellectual properties, but there are just as many legitimate reuses for action figure molds that often result in even better (or simply hilarious) new toys to be enjoyed by future generations. The reason for this lies in the power of retooling. Retooling a toy goes beyond a simple repaint, recycling parts to create entirely new characters in often completely unrelated toy lines. Sure, this practice is only common because toy companies are cheapskates, but the outcomes make for some pretty sentimental discussions. Get reading to rekindle that loving feeling for toys made even more wonderful the second (or third) time around. 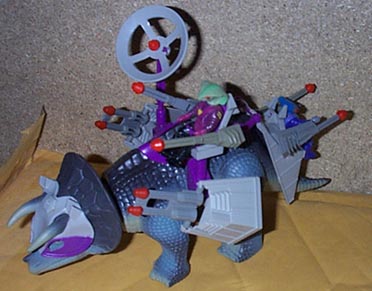 It’s hard for our highly evolved 2009 brains to imagine, but once upon a time Tyco had two factions of scientist dudes strap futuristic (by the standards of 1988) weapons to dinosaurs and duke it out for one reason or another. The heroic Valorians and evil Rulons weaponized their dinos in a fairly humane fashion, much the same way kind-hearted dog owners would take their pooches for a neighborhood stroll, using stylized harnesses. In fact, they did such a good job of not deforming their cold-blooded friends that Tyco was able to salvage the toy molds for a line of “accurate” dinosaurs through the Smithsonian Institution a few years later. The re-released toys were missing cool neon color schemes and missiles, but many retained the action features that made the originals radder than the average plastic prehistoric beast.

Originally intended to portray Forceworks’ Julia Carpenter incarnation of Spider-Woman (there’s been, like 17 of her), this fairly basic female body sculpt would be repurposed for the simultaneous Fantastic Four line as a repainted Invisible Woman. But it wouldn’t stop there. Along with the Phoenix action figure mold, these shapes would be repainted to depict everyone from Ms. Marvel to Mary Jane Watson, especially in ToyBiz’s She-Force line. Nobody can blame TB for making use of its molds to meet collector demand, it’s just there’s something spectacularly eerie about Spider-Woman having her own action figure version of a clone saga.

This one is a no-brainer. Even though Macross’ Strike looks, well, not quite the same as the Jetfire that appeared on the G1 TF animated series, it’s such an awesome toy that its inclusion in the transformers series was pretty much a wakeup call to every kid who came across one. The sheer awesomeness of Macross’ variable fighter outshone a number of the G1 toys, forcing collectors to reconsider what an killer transforming action figures could really mean. Jetfire’s toy supremacy is likely a reason nerds and nerdettes raised in the ’80s have kept collecting, continuing to seek out transformers with a perfect balance of robot and vehicle mode bad-to-the-boneosity.

Most Megophlies are aware of the almost legendary misappropriation of Dr. Doom’s Mego sculpt, which was retrofitted for an Iron Man release leaving the ruler of Latveria unreleased (note the nose on Iron Man’s mask). As switches go, most kids would probably prefer an Iron Man to a Dr. Doom — especially with that goofy head. Better an appropriately drunk-looking Tony Stark than a Victor Von Doom under the influence of mood lifters, right? 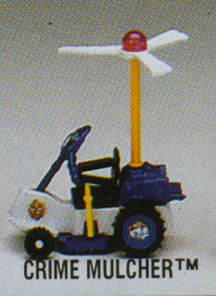 One of the last vehicles conceived for The Real Ghostbusters Ecto Glow wave, the Glow Copter would be retooled for the train wreck that was the Police Academy: The Animated Series as the Crime Mulcher– a kind of riding lawnmower helicopter thing. It may sound harsh to criticize a toy line that brought joy to children everywhere with handcuffs puntastically shaped like human hands (Get it? Whahaha!), but it just seems kind of wrong to screw with TRGB even if the results were fairly cool. These conflicted emotions are just the beginning of what is sure to be a very aggressive eBay auction battle. 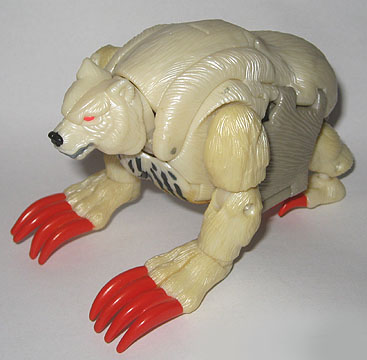 The Transformers property is unique in that it retools toys within its own line constantly. Usually the results are fun, but in the case of Scholastic’s Animorphs, however, the retools are more than a little goofy. While it was completely tacky of Hasbro to slap the Transformers brand onto another intellectual property (that wasn’t something as awesome as Star Wars, for example), the line’s intrinsic similarity to Beast Wars was reasonable enough to capitalize on. That’s why when the Animorophs series folded, a few unused sculpts found their way into the mainstream Transformers-verse as the “Mutant Beast Wars” line. Luckily Hasbro swapped the awkward teenager faces for the superior samurai-helmeted frowning robot dudes fans know and love or perhaps the retool wouldn’t have made this list. 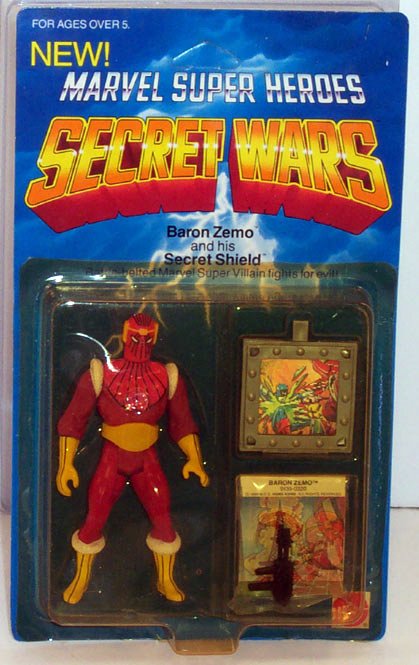 Marvel’s Secret Wars storyline may have permanently instilled mainstream superhero comics with an “event” mentality that drains readers’ wallets, but the delightful line of action figures it inspired (or was it the other way around?) can hardly be blamed for that. Many characters received their first plastic depictions in the line, granting it a top place in action figure history. The toys were so successful that a Brazilian company even repurposed the molds for a new series about 15 years ahead of its time. After all, random configurations of super hero and villain parts don’t always manifest in such Deadpoolish ways. Honestly, “Darklord’s” coincidental resemblance to Rob Liefeld’s Merc With A Mouth is pretty much the only cool thing about the heavily pouched and highly armed Future Warriors. Still, it’s enough to make it awesome.

2) The New Adventures Of He-Man/Demolition Man

The first rule of The New Adventures Of He-Man is kind of like the first rule of Fight Club — don’t talk about it. With that in mind, let’s keep this entry brief and point out that a toy line best left forgotten was largely retooled to portray a movie best viewed after several cocktails. It’s not really saying much to point out that the DM toys are a huge improvement over their “parent” action figures, but anyone who doesn’t feel like high-fiving the closest random person just for discovering that there were pre-Blade Wesley Snipes action figures is living a sadder life than most TR readers.

Kenner’s entire Robin Hood: Prince of Thieves line was a bit of a hodgepodge of Star Wars and Superpowers molds. Kevin Costner’s Robin consisted chiefly of Green Arrow parts, while his Merry Men were formerly angry aliens. The crown jewel of the plastic casserole, however, has to be one of the most beloved playsets of all time — the Ewok Tree Village-turned-Sherwood Forest. What’s cool about the augmented Ewok digs is that Sherwood Forest is more or less an improvement upon its source mold, adding new details and leaving pretty much all of the original accessories in tact. Simply put, it’s as close as most nerds born post 1983 will get to tracking the thing down at a garage sale, which makes it a fine alternative to shelling out the big bucks for the Ewokier original.