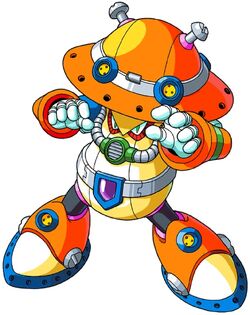 They say that the truest measure of a hero lies in the tenacity of the villains that they face. Batman, Spider-Man, the Flash, Godzilla; these are protagonists with some serious galleries of rogues. Still, there’s one video game star that may have them bested. That’s right, Capcom’s blue bomber Mega Man, who (in his various incarnations) has faced down hundreds of unique foes. This is an extremely impressive track record considering that each of these so-called robot masters have proven lethal to players time and time again. Regardless, even the most remarkable lineup of villains is bound to bear a few, well, not necessarily misnomers, but hilarious-sounding foes in mix – it’s just the law of averages at work. Prepare for sophomoric innuendo aplenty as TR counts down some of the most suggestive boss names in the Mega Man franchise.

It probably wasn’t up to him, but Quick Man was given a terrible code name. Not only does it imply a certain lack of…stamina, it’s also fails to characterize his true killing ability. Most Mega Man bosses are named after their weapon, or at least their lethal power (Bomb Man has a bomb, etc.), but Quick Man throws boomerangs – quickness is kind of just a bonus. So really, the ladies (well, Splash Woman anyway) would be all about him if he’d just marketed himself with more confidence.

Like a lot of the evil robots on this list, Burst Man’s seemingly tasteful name is most impaired when coupled with the villain’s weapon of choice. This guy uses a “Danger Wrap” to effectively burst things. Now, I’m not sure if he uses this dangerous wrap on himself, but with a name like Burst Man, you kind of have to assume the worst.

Wood Man doesn’t just have a name associated with those who don’t need Cialis, his name also implies he’s a d-bag, which he is. Look at him. That unjustifiably pouty frown proves just how bad his attitude is. Why do you think none of the other Mega Man bosses wanted to share a stage with him (other than the fact that isn’t how the game works)? What’s his problem anyway? You’d think a wood-based mechanation built despite the natural metallic order of the robot world would feel special, but instead he chooses to be an outsider. Fine, be that way Wood Man. Everyone would rather hang out with Plant Man anyway – at least he wears his goofy appearance like a badge of robo-honor.

While the pure of heart might try to argue that it isn’t accurate to pronounce “Uranus” the way immature fourth graders like to, the pure of heart are pretty much confined to Riverdale and Care-A-Lot. That said, we nerds prefer the hilarious way to say it, and since we’ve effectively co-opted Mega Man, this astrological-themed robot’s name is officially an anus reference. After all, Dr. Wily gave the dude his robo name and he’s got a PhD. Who are we to argue?

While all robots are technically “fake men,” Fake Man’s name implies that even his pseudo gender should be called into question. That’s not to say he was a fake woman (after all, at the time of his creation the first female Mega Man boss, Splash Woman, didn’t even exist) or any kind of fake human, but rather a fake robot. He’s not even a real police bot! But what’s a fake of a fake of a fake? Is it like how three lefts make a right? Could he be super real? Whatever the case, Holden Caulfield would likely consider him a phony.

While more mature minds (at this point, anyone with any kind of maturity has probably stopped reading) would reason that “junk” simply means garbage – and Dr. Wily did build a Garbage Man in an episode of Captain N – the Topless Robot crowd knows there’s more to this boss’ weapon “the Junk Shield” than meets the eye. Clearly the guy knows that rough housing on the football field can lead to injury, hence his apt piece of protective technology. If he weren’t evil, he’d be a hero.

Plug Man watches Laugh-In waiting with anticipation as they tell his favorite knock-knock joke – y’know, the one where the punchline is “socket to me!” He’s got a pretty innocent sense of humor for an evil robot, which is why the rest of the Mega Man 9 bosses chuckle about his unfortunate name behind his back.

Not only does Hard Man have a suggestive name, he’s also one of the Mega Man bosses with an…evocative design. Likely the only foe constructed with what’s clearly a lower cavity, Hard Man’s sturdy nature is augmented by an ability to cause tremors. In Mega Man 3, these tremors manifest in mostly geology-related ways, but given his unique physiology, Hard Man seems just as equipped to produce tremors of passion (seriously, at this point I have to wonder what kind of Mega Man fan fiction could one day wind up on Fan Fiction Friday).

Anyone who has ever spent more than seven or so minutes watching contemporary anime knows what a mushroom symbolizes in Japanese culture (hint, rhymes with the last two syllables of “happiness”). So why is it any surprise the phallic fungus should find its way into a videogame franchise birthed in the Land of the Rising Sun? Split Mushroom does his best to avoid the clich?s so many of his suggestively-named hombres committed by demonstrating a power set seemingly devoid of innuendo (he creates a duplicate of himself and shoots spores – like a regular shroom), but the name is just too obnoxious to overlook. Bravo, Split Mushroom, you’ve given a generation of gamers with Jr. High mentalities (myself included) something to smirk about for years to come.