One of the semi-criticisms of those of us who’d dare buy new Star Wars merchandise before we actually see the movie is that we might end up not liking what we think we will. What if Kylo Ren’s a whiny dork? What if Rey screams “YIPPEE!” every five minutes? What if Finn begins every sentence with, “Yo yo yo, let me speak on this!”?

I don’t really expect that to happen, but in particular, I don’t think the fans who are already celebrating Captain Phasma will be horribly bummed. For starters, she’s a chrome Stormtrooper with a cape. She’s also the first major female villain in a live-action Star Wars film, she’s played by Gwendoline Christie, and by appearance she’s a character who just happens to be female in a command role, rather than an explicitly feminized trooper with pink boob armor. For fans to turn on her at this point, she’d have to either argue in favor of sexual harassment, or make out with Jar Jar. 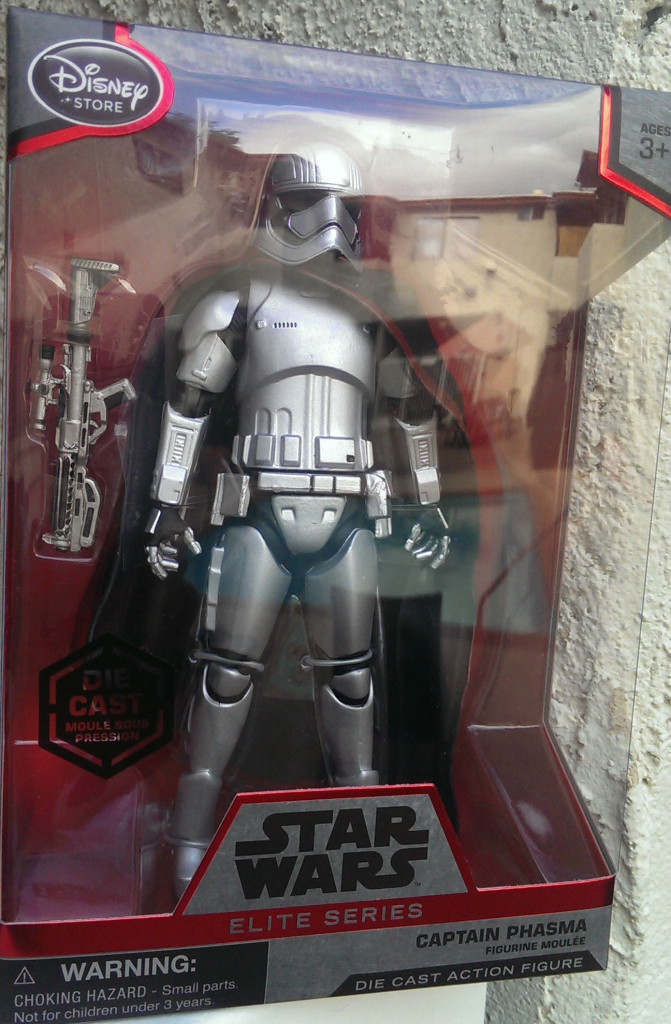 When the Disney Store exclusive Elite Series were revealed on Force Friday, they looked from a distance like Black Series figures, only made of metal. They are not. At all. 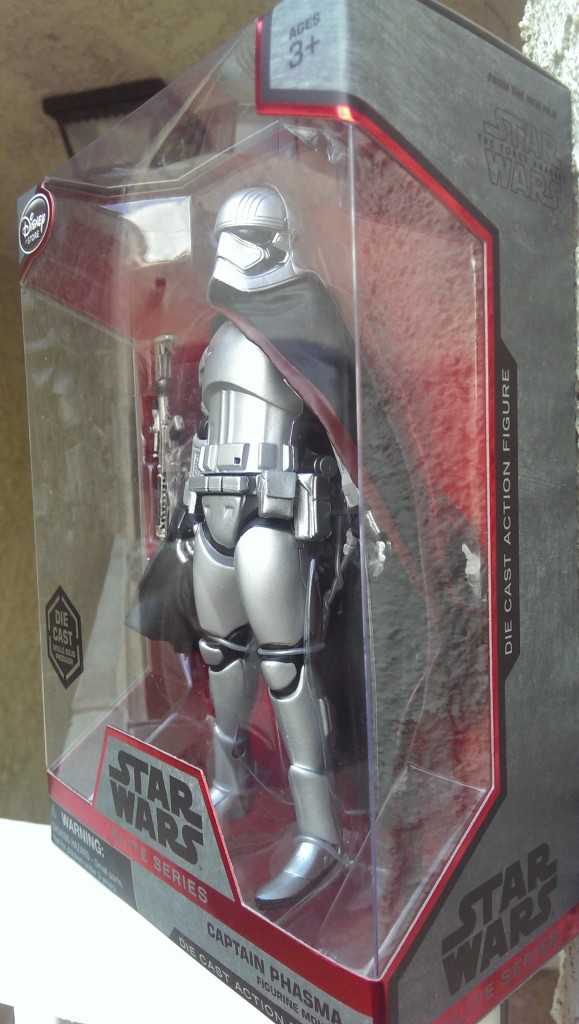 Obviously, Disney wanted in on that sweet toy action, but they had to choose scales not already covered by existing licenses – so we get 7-inch scale here, as well as the 14-inch talking figures. 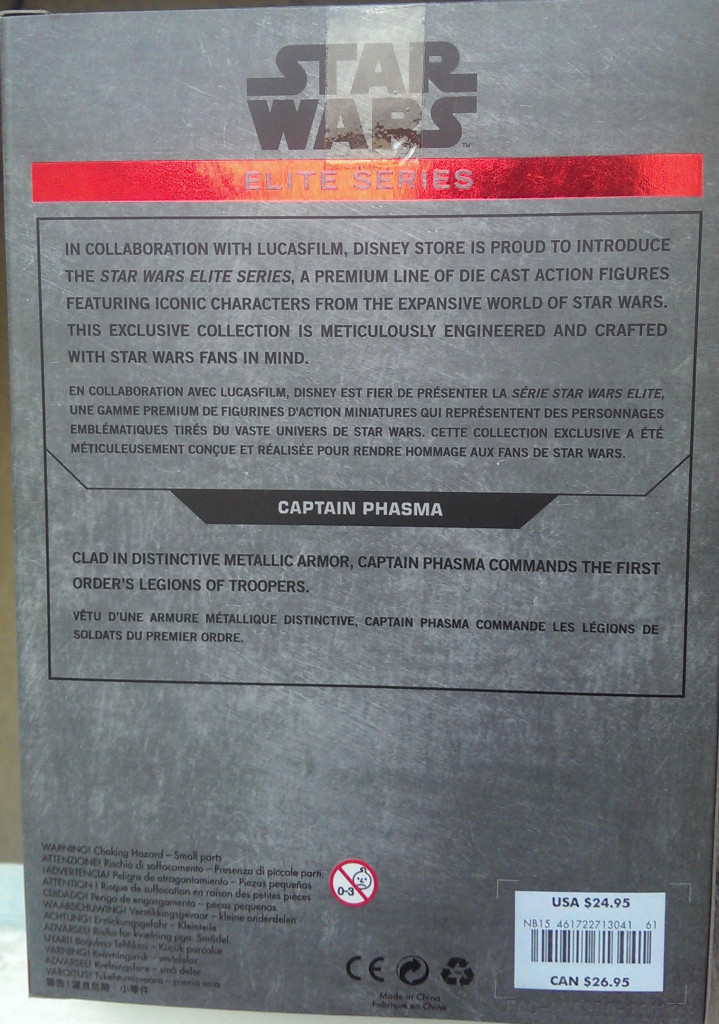 Now, you might be thinking, “Yeah, yeah, it SAYS diecast, but probably only one piece is diecast, right?”

Phasma’s torso, arms and legs are diecast. The only parts that aren’t are the internal joints, feet, hands, head, blaster and cape. This is a heavy figure, so be careful where you store her. The shipping box said it weighed two pounds, but I think that’s understating – this will give you a concussion if it falls on you. 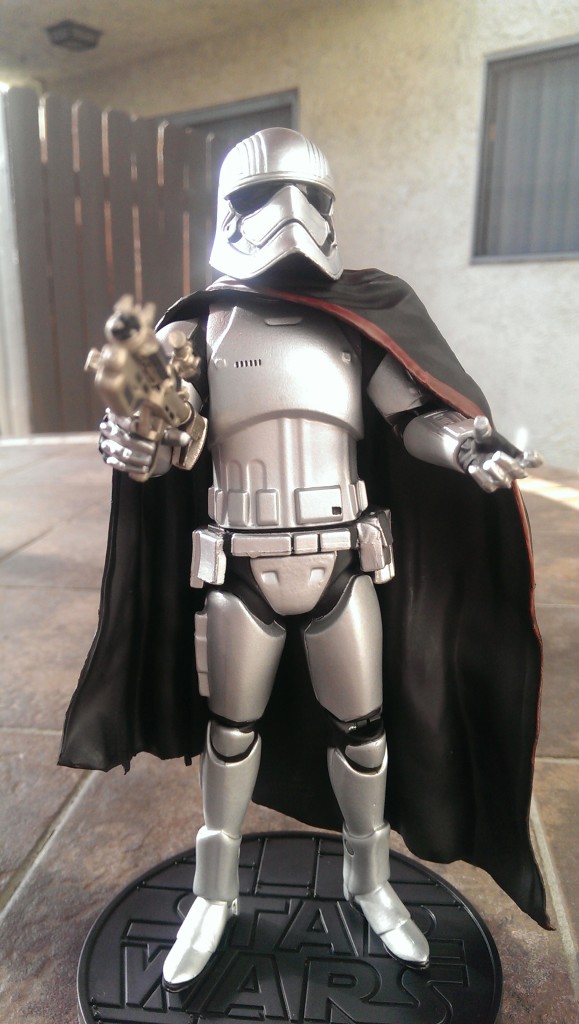 No Phasma toy yet is screen-accurate chrome, but this is at least metal, and the plastic matches nicely too. It took me a while to figure out the head was not metal too. 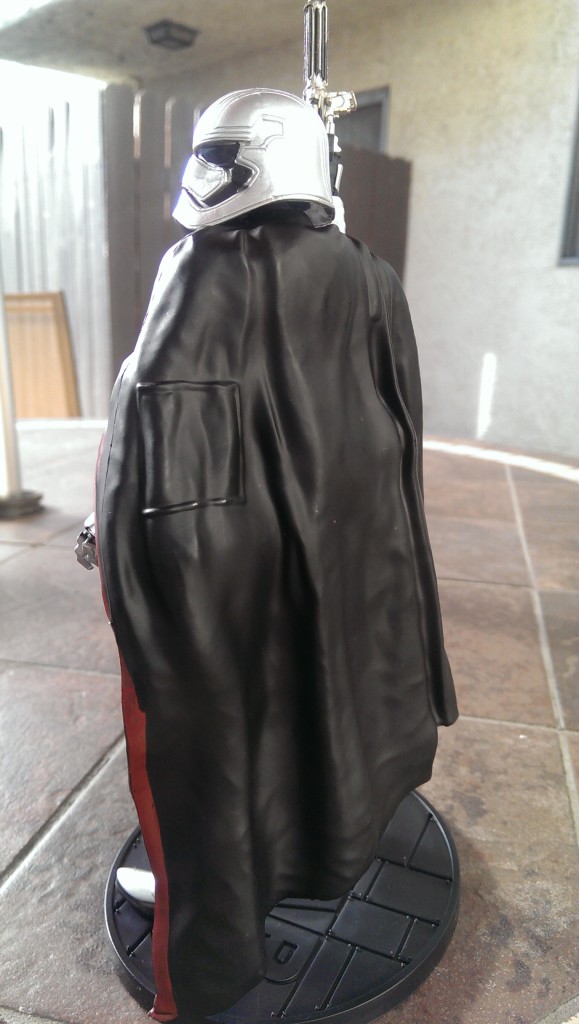 The pouch on her cape feels like a key detail – what could she be hiding? A lightsaber hilt? A bomb? Energy shots of blue milk? We’ll have to wait and see. 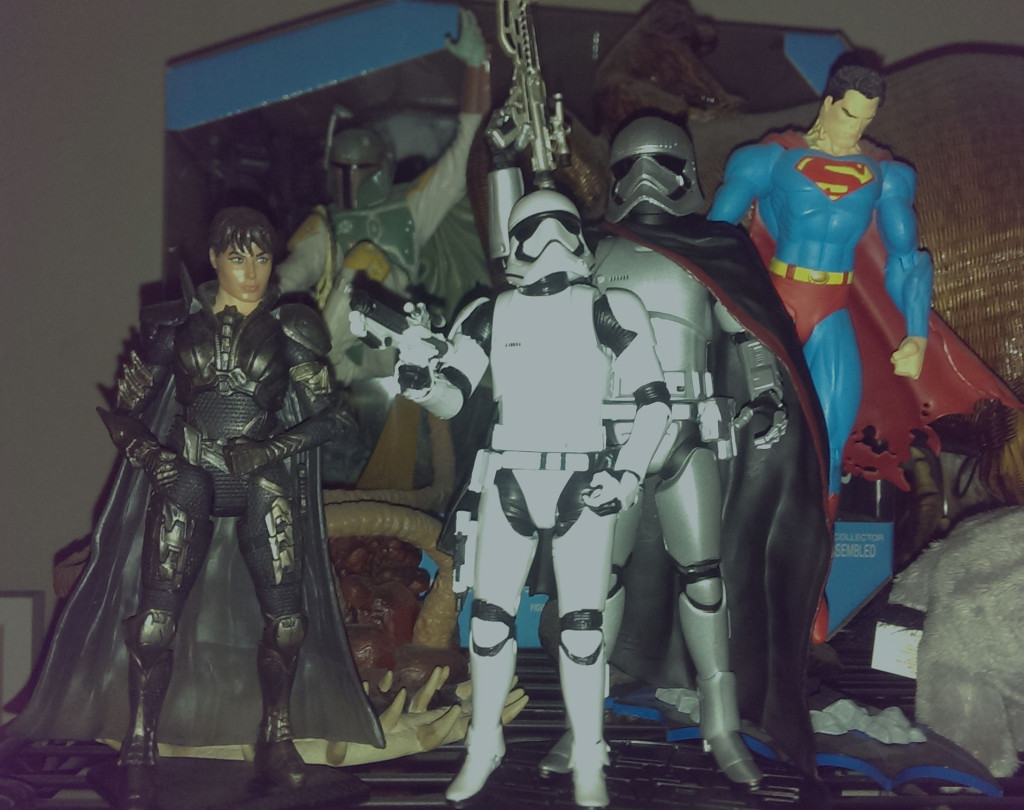 As you can see, she’s significantly bigger than a Black Series Stormtrooper. So unless you want her to represent a Darktrooper, she doesn’t match up. However, that doesn’t mean she’s not in scale with everything – as you saw up top, she displays okay with some McFarlane and NECA movie figures. And she has the powerrrrr…. 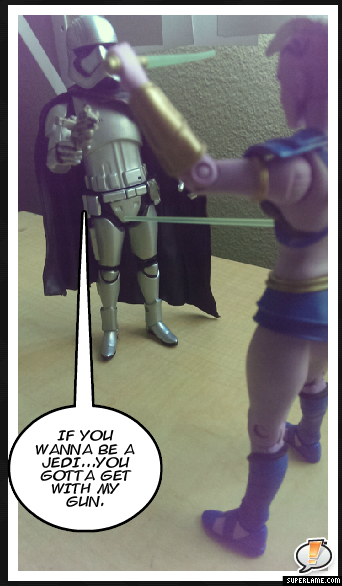 Not a bad match-up with Masters of the Universe Classics. 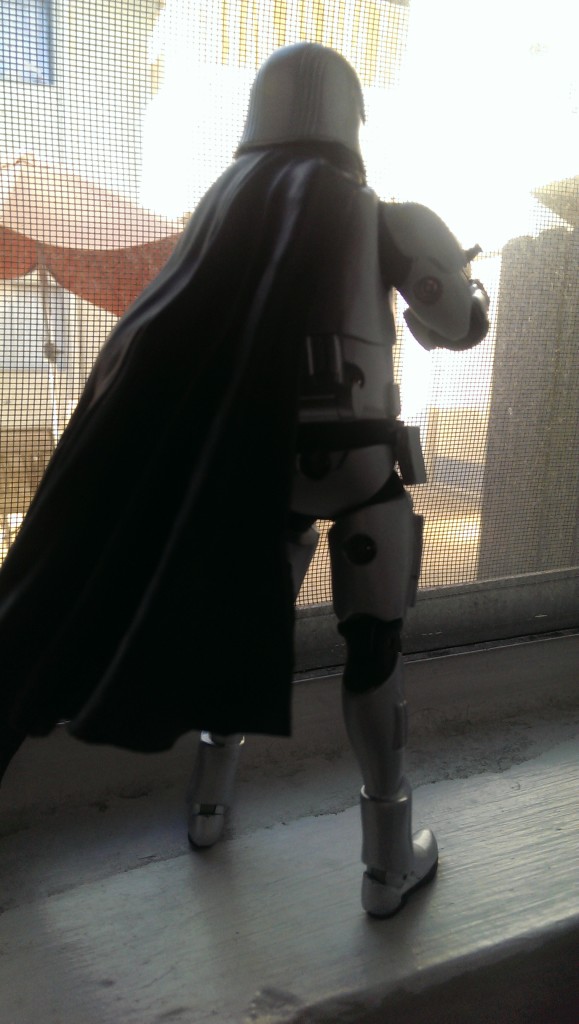 Now, another key difference with the Black Series is articulation. Phasma has a ball-jointed neck, cut-and-pivot ball joints on shoulders and ankles, ball hips, hinge joints on knees and elbows, and cut wrists. Now, because most of her is made of metal with no give, this is more limiting than it sounds. She can’t hold her gun with both hands, for example.

Here is a picture displaying her about as posed as she can get. Also, because she’s metal, temperature may affect looseness of joints, though you can generally get the legs in a sweet spot to keep her standing. 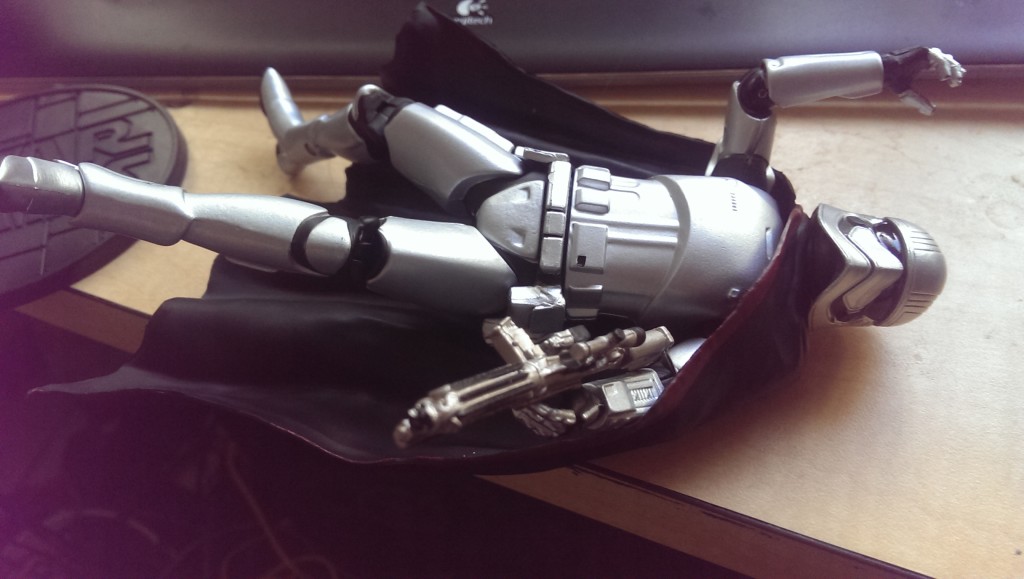 Yeah, Finn’s a little short for this Stormtrooper.

If you want playability with your collector figures, wait for the Black Series version. If you want a good sculpt with some poseability that would also be good to throw at the heads of home invaders, this will work. The metal also has a fun tactility – it’s cold and heavy, like my soul. 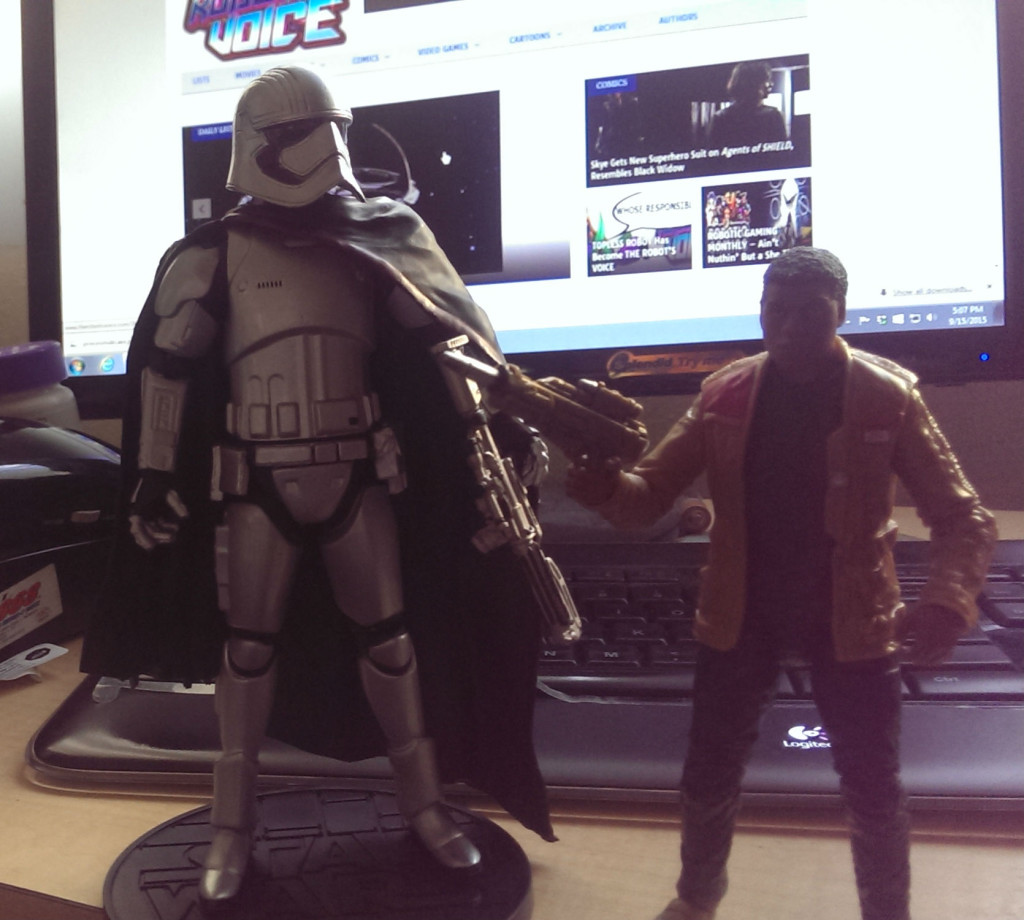 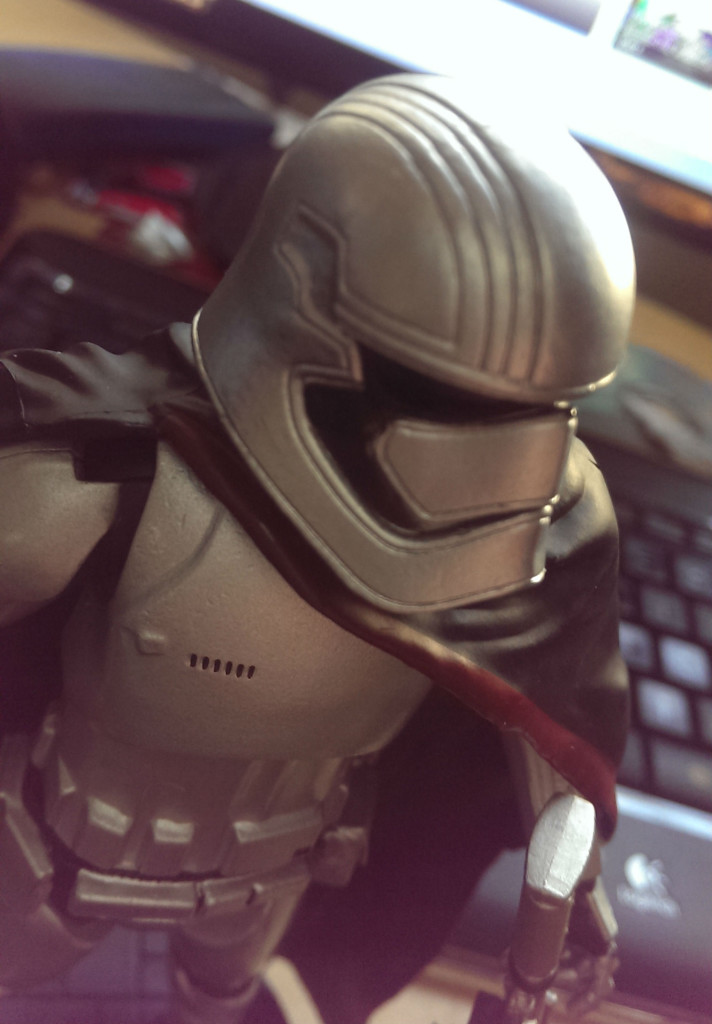 Here’s the blaster, which can go in either hand but better in the right.

And here’s the stand, which works well enough. 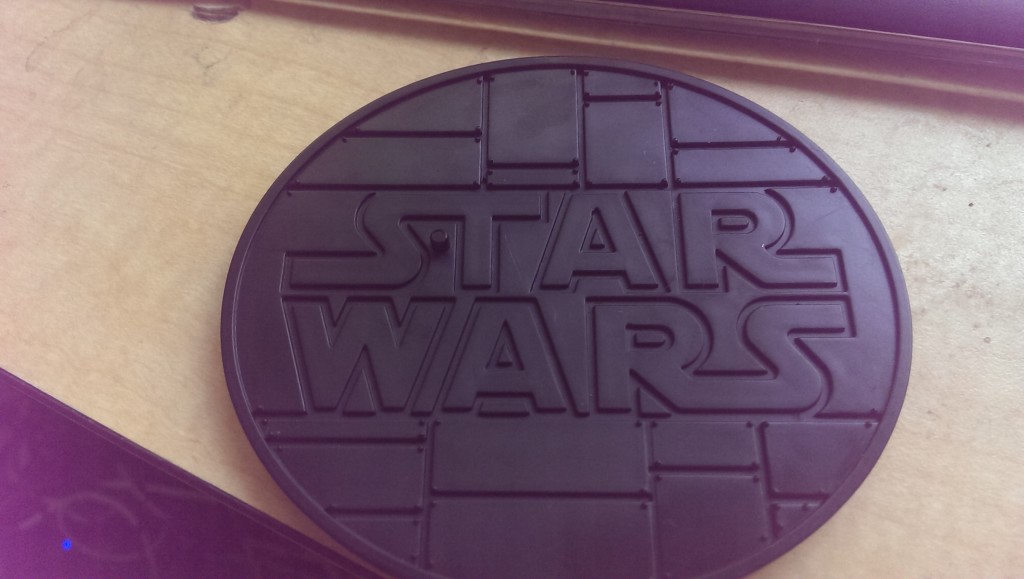 The line is extending into the existing Star Wars movies, which should be interesting, as it will include Grievous and Boba Fett. But while a metal Grievous may be fun, it won’t be up to the inevitable Black Series one that might actually do his transformations justice. Phasma works well for this style because you want her to be metallic – and she works well as a character because boys and girls can imagine themselves under the armor.

At $25, I feel like I paid about the right amount, but I won’t be in a rush to collect them all. ‘Tis good to have one, though. I ordered her on Force Friday, and she arrived this past Monday, very nicely packed by the Mouse. 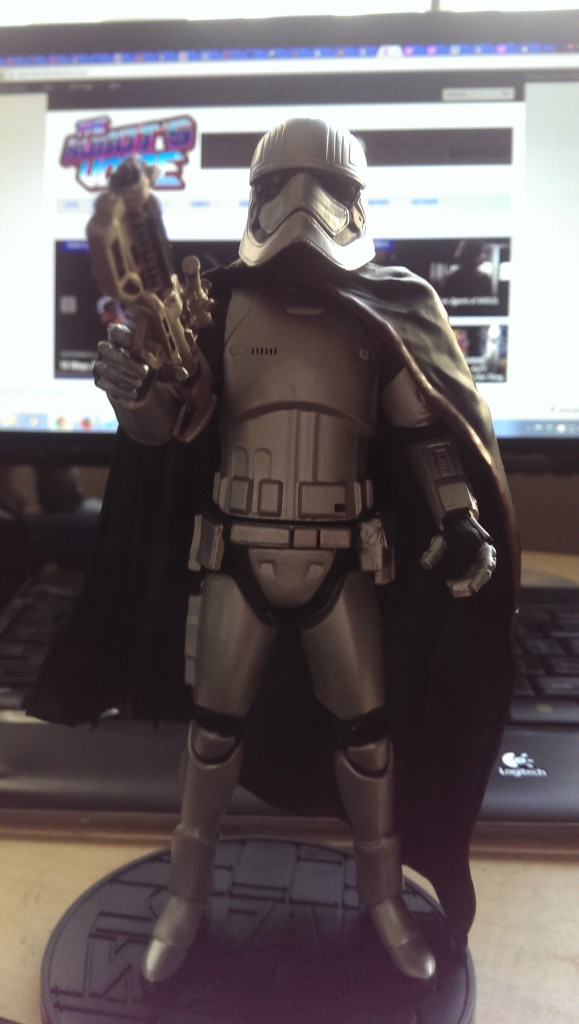